Natural gas futures and forwards markets were lower across the curve for the period between April 13 and 20, with May shedding an average 6 cents as another retraction in the storage surplus and forecasts for mostly mild weather in the coming weeks pressured the market, according to NGI’s Forward Look. 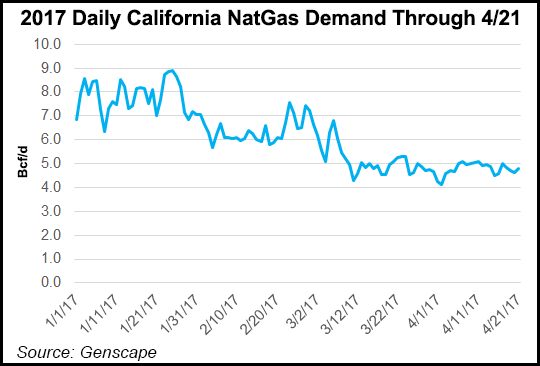 NGI did not publish data on April 14 in observance of Good Friday.

Nymex futures set the tone for the week’s decline as the market continues to juggle a host of factors that are sure to create at least some volatility as the prompt month nears expiration on April 26. The Nymex May futures contract slid 6 cents over the week to settle April 20 at $3.16.

The front-end weakness comes as the natural gas storage surplus was once again diminished thanks to a historically large injection for the week ending April 14. The U.S. Energy Information Administration (EIA) reported a 54 Bcf build in storage inventories for that week, which compares to a 6 Bcf injection for the same week last year and the five-year pace of a 35 Bcf build. At 2,115 Bcf, stocks are 368 Bcf below year-ago levels but 282 Bcf above the five-year average of 1,833 Bcf.

Analysts at investment bank Jefferies said the recent spate of warm weather has certainly taken its toll on gas demand and thus, storage. After a colder-than-normal March helped to offset a portion of the demand loss caused by a warm January/February, April has now switched back to warmer than average, with heating degree days through the first half of the month down about 25% year over year (yoy), the New York bank said.

“While April weather has less of an impact on gas demand than the months during the coldest stretches of winter, April res/comm [residential/commercial] demand still impacts storage levels. MTD [Month to date], res/comm demand is ~4.3 Bcf/d lower yoy and ~3.2 Bcf/d lower than the five-year average,” Jefferies said Thursday.

And at least some market insiders are expecting a few more strong storage builds before things begin to stabilize. Analysts at Houston-based Mobius Risk Group said earlier in the week that the market continues to struggle with micro concerns of larger year-over-year storage injections in the next few weeks, and the conflicting trend of tighter underlying supply/demand conditions.

“Even the most bullish market participants have been faced with the reality of another reduction in the year-over-year storage deficit on Thursday, and early indications for the subsequent inventory report suggest this trend could continue past mid-month,” Mobius said Monday.

Weather forecasters at NatGasWeather said Friday that they expect surpluses in supplies will stall around +250-260 Bcf after the next three to four EIA storage reports are accounted for. “Weather patterns should then have better opportunity to cash in on the tight S/D background environment in May as long as production doesn’t significantly increase,” it said.

For now, though, nuclear outages and soft production are offering at least some near-term support for the market. Even though roughly 9,730 MW of nameplate nuclear capacity was restored in the last several days, more than 12,300 MW of nameplate capacity was taken offline during the same time, data and analytics company Genscape Inc. said. Total nameplate capacity currently on outage now stands at 23,255 MW. Conceptual gas burn replacement for the entirety of that capacity would be close to 3.2 Bcf/d, the Louisville, KY-based company said.

Meanwhile, production continues to hover around 70-71 Bcf/d due to various maintenance-related events on pipelines, but supplies are expected to grow in the coming months and especially in the second half of the year.

Still, storage concerns appear to be of the utmost importance to the market as May nears expiration. After trading flat for much of the morning, the Nymex May futures contract fell throughout the afternoon and ultimately settled at $3.101, down 5.8 cents on the day.

“With May expiry front and center, yesterday’s storage report and the likely outcome next week are not conducive to meaningful upside for the time being,” Mobius’ Zane Curry, a natural gas analyst, said Friday.

NGI’s Nate Harrison, a markets analyst, said he expected May futures to remain range-bound between $3.10 and $3.30 until Wednesday’s expiration. “Futures seem to be becoming a bit more bullish since the last month of the winter strip dropped off the board, with prices generally rising since the end of February. The May contract, however, has brought us a bit of a retracement over the past couple weeks,” he said.

And Curry said the retracement could continue as the bearish year-over-year storage comparisons do not bode well for a flat versus summer 2016 injection profile. “In our opinion, the fixation/fascination with an end-of-October storage level of 3.6 Tcf or below will be the key metric which frames near term market sentiment. In addition, a break in the ”heat’ along the Gulf Coast in early May causes some additional concern,” Curry said.

Taking a closer look at the forwards markets, most pricing hubs followed the lead of the Nymex. One exception was the Algonquin Gas Transmission Citygates, which continues to move against the pack as a summerlong maintenance is in effect along the pipeline, creating volatility in both the spot and forward markets.

Just Thursday, Algonquin announced an unplanned, two-week outage its Burrillville compressor station in Rhode Island. The outage is expected to begin May 9, and capacity at Burrillville will be reduced to a maximum of 365 MMcf/d.

Seven-day flows through Burrillville have averaged 613 MMcf/d, with a single-day max of 768 MMcf/d, according to Genscape. “This outage will occur at a very northern part of Algonquin, significantly reducing the re-route options in the event demand exceeds what can travel through the compressor,” it said.

In addition to restrictions at Burrillville, the entire G System will be limited to 250 MMcf/d. The possible source options for demand north of Burrillville are TGP at Mendon or Lincoln, Maritimes at Salem Essex or Lincoln, or Everett LNG. “These locations will only need to be called into play if demand north of Burrillville exceeds 365 MMcf/d, which happened two days in the past two years during this timeframe,” Genscape said.

The constraints on the Algonquin pipeline helped support forward prices through the summer. AGT-CG May forwards were essentially flat from April 13 to 20, holding steady at $3.07, according to Forward Look. June forwards were down 2 cents during that time to $3.10, while the balance of summer (June-October) was down 3 cents to $3.24.

By comparison, forward prices nationally fell 6 cents for May, 5 cents for June and 5 cents for the balance of summer.

At the opposite end of the United States, forward prices in the Pacific Northwest appeared to be responding to projected weak demand in the coming months thanks to strong hydro generation. Northwest Pipeline-Sumas May forwards fell 5.6 cents between April 13 and 20 to reach $2.45, but June dropped 13 cents to $2.64 and the balance of summer slid 12 cents to $2.77, Forward Lookdata shows.

Genscape has said that it expects “strong, potentially record-breaking” hydro generation in both California and the Pacific Northwest. California markets, however, posted losses that were in line with the rest of the country.