May natural gas forward prices rose an average 8 cents from April 20 to 26 as increasing storage deficits put the ball back in market bulls’ court, albeit temporarily, according to NGI’s Forward Look. 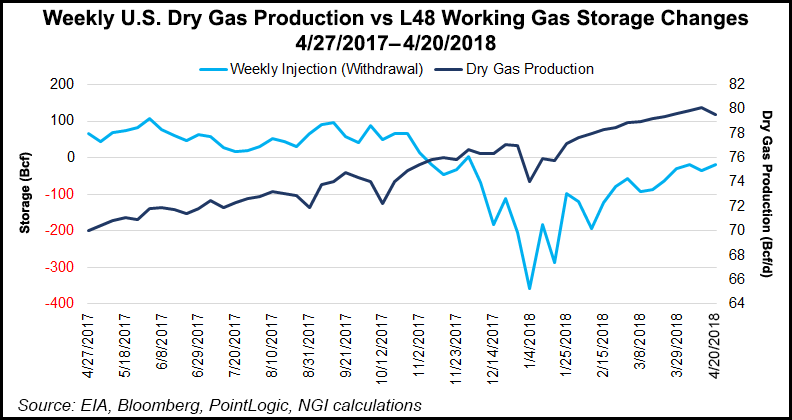 Despite the volatility that typically accompanies bidweek, Nymex futures were rather quiet as the May contract shifted less than a nickel each day during the week. A surprise bullish storage report capped off the week, leading May futures to expire 3.5 cents higher Thursday at $2.821. June settled 3.2 cents higher at $2.839.

At the heart of the week’s gains were increasing storage deficits, which Thursday’s storage report from the U.S. Energy Information Administration (EIA) showed grew even more. The EIA reported an 18 Bcf withdrawal from Lower 48 gas stocks for the week ending April 20, widening the year-on-year storage deficit to 897 Bcf from 808 Bcf, while expanding the year-on-five-year deficit to 527 Bcf from 449 Bcf.

Thursday’s reported draw was unusual given that the market is now three weeks into the official injection season. Last year, EIA recorded a 71 Bcf build into inventories, while the five-year average is a build of 60 Bcf.

Despite the bullish storage picture, Friday brought about a correction that nearly wiped out the week’s gains. The Nymex June contract fell as low as $2.770 and eventually settled just a fraction higher at $2.771, down 6.8 cents on the day.

“The fact that April is almost guaranteed to post a net storage withdrawal has been obscured by the markets’ expectation that sequential production growth will resume at any moment,” Mobius Risk Group analysts said.

For reference, over the past 10 years, the tightest (most bullish) April was 2003 when a net build of +58 Bcf was reported, Mobius said. In addition, dry gas production has been essentially flat for two months. “A continuation of this trend would lead to a significant reduction in the year-over-year growth rate by late June,” analysts said.

But NGI Director of Strategy and Research Patrick Rau said Friday’s correction could be technical in nature as the June contract is clearly in overbought territory. “Slow stochastics are at 82, which is overbought in mostly anyone’s view,” Rau said. “Furthermore, while June did pierce above its 20-day Bollinger Band, the contract has a history of retreating almost immediately thereafter.”

Looking more closely at other markets across the country, SoCal City-gate forward prices posted substantial increases on the heels of stout gains in the spot market early in the week due to strong demand and ongoing import limitations in the state.

But while the surging spot market had a hand in the rally seen along the forward curve, it was news that the state of California would not allow Southern California Gas Company (SoCalGas) to increase injections this summer at the Aliso Canyon storage facility that sent the market skyrocketing.

The California Public Utility Commission (CPUC) has issued a draft response to the plan proposed by SoCalGas for meeting summer 2018 gas reliability needs that rejects any increase in injections to the Aliso Canyon gas storage facility, but does allow for incremental injections at other facilities on a trial basis that exceed the systems’ permitted limits, OPIS PointLogic analyst Kevin Adler said.

The draft resolution, which will be voted on at CPUC’s meeting on May 10, is the Commission’s response to the ongoing issue of how to assure sufficient gas supply when power demand (and gas demand) is highest in Southern California, while Aliso Canyon remains available for only limited use.

CPUC noted that the SoCalGas storage network is nearing this summer’s high-demand season at a lower balance than in the past, due to ongoing outages of pipelines delivering gas to Southern California. This has affected not just Aliso Canyon, but the company’s three other storage fields that serve Southern California.

“All of these outages have placed additional stress on the system, making storage injection even more urgent than it was in spring 2017,” CPUC said in its draft response.

Meanwhile, the state continues to grapple with import limitations as several pipelines are restricted due to maintenance. “That makes supply tighter this summer than maybe had been expected,” Adler said.

Gas takeaway constraints in the Permian Basin continue to wreak havoc on local markets, with both El Paso-Permian and Waha being the only two price points in the country to post losses for the week.

Weakness in the Waha spot market spilled over to the front of the forward curve, as Waha’s Monday spot average of $1.34 marked the lowest average price at the hub since Dec. 4, 1998, when Waha traded as low as 95 cents on the way to averaging $1.03.

As NGI’s Shale Daily reported this week, with Permian Basin crude oil basis widening recently to as much as $8.00/bbl off of West Texas Intermediate, and as Waha natural gas capacity appears to be tapping out, producers working the widest and deepest stretch of land in the U.S. onshore are likely to face a lot of questions during earnings season, according to analysts.

Although some gas pipeline projects have been proposed, no relief is expected until late 2019 at the earliest. Furthermore, BTU Analytics estimates that by 2020, the Permian will grow to represent 40% of U.S. exploration and production capital expenditure (capex), with more Permian capex meaning “more activity and production growth relative to other plays,” BTU CEO Andrew Bradford said in a recent note.

“Adding insult to injury, BTU’s forecast calls for Permian gas growth to outpace U.S. demand growth from 2020-2023. This means that, all else equal, other plays will need to decline to accommodate Permian gas growth.

“Barring a major WTI price correction, Permian associated gas is going to impact all gas basins for years to come.”