Natural gas forward prices generally moved lower for the Dec. 6-12 period as milder weather finally moved across the country, slashing demand from earlier highs. January prices were down an average 20 cents, while the balance of winter (February-March) was down an average 12 cents, according to NGI’s Forward Look. New England pricing hubs, however, bucked the downtrend as ongoing pipeline constraints in the region continue to leave those markets vulnerable to price spikes. 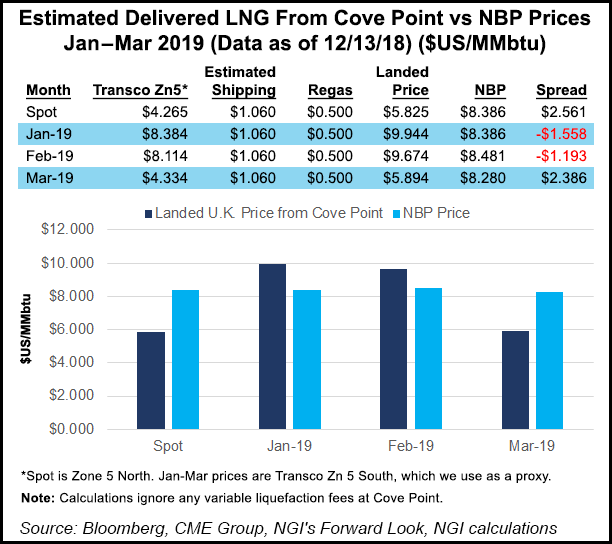 After seemingly endless weeks of bitter winter weather, a turn milder this week led to steep sell-offs in forward and cash markets alike. For the forward markets, Nymex futures led the dramatic declines as the January contract tumbled 19 cents to $4.136, February dropped 18 cents to $4.035 and March slipped 7 cents to $3.853.

Even as long-range weather outlooks continued to fluctuate, near-term weather forecasts have trended increasingly warmer, according to Bespoke Weather Services. As far as details, a strong weather system was expected to sweep across Texas and the South Thursday into Friday with areas of rain, locally as snow, and then move across the Southeast Friday and Saturday.

The rest of the country was forecast to be mostly mild into early next week, with high temperatures expected in the 40s and 50s across the northern tier and 60s to locally 70s elsewhere, NatGasWeather said. A fast-moving weather system was forecast to race across the Northeast early next week with colder temperatures, while remaining mild over the rest of the country, the firm said.

Despite the sell-off in futures and forward prices this week, some weather models have begun to trend colder for the Northeast cold front and again for a brief cold snap expected just before Christmas. Models, however, continued to show the cold air shifting over the west-central United States Dec. 26-28 as the East warms, according to NatGasWeather.

“There’s still expected to be very cold air over Canada during the last week of December, so colder trends in time could occur with just the slightest shift southward of the frigid cold pool,” the forecaster said.

Indeed, the United States recorded a total of 969 gas-weighted heating degree days (GWHDD) for the period from Nov. 1 to Dec. 12, according to forecaster Radiant Solutions. This is nearly 100 GWHDDs colder than the 30-year normal and ranks as sixth coldest for the period among records dating back to 1950.

“The start of the heating season will be remembered for a top-10 November cold, early season snow from the Midwest to the East and record snow this past weekend in parts of the Carolinas and Virginia,” Radiant Solutions lead meteorologist Bradley Harvey said.

A pattern change is now on the doorstep as most areas in the United States have above normal temperatures forecast for the next 10 days, Harvey said. Radiant Solutions’ forecast ranks as the fifth warmest for the period for Dec. 13-22, per national GWHDD measures.

The weather firm expects the near-term warmth to give way to a variable January and a colder-than-normal balance of winter. The November to March heating season is on pace to total 3,847 GWHDDs, which would make it the coldest since the 2014-15 season and about 4% colder than last year, it said.

Other forecasters agreed that January could trend colder, especially as the month progresses. If stratospheric influences emerge, the United States could see more significant cold late in January, but there is still uncertainty, according to Bespoke Weather Services. “We have an interesting battle setting up between the stratosphere and tropospheric tropical forcing, which could limit any Arctic connection into the U.S. temporarily,” chief meteorologist Jacob Meisel said.

Current outlooks reflect a very strong signaling for a cold February, while December always had the highest confidence warm signal of the winter, he said.

The potential for extremely cold temperatures to envelop the Lower 48 in January and February is the key factor supporting winter risk premiums, according to EBW Analytics. “If this meteorological buildup toward colder temperatures were to fall apart, front-month futures could come crashing down,” EBW CEO Andy Weissman said.

In the more likely event that it materializes, however, it would not be surprising to see the January contract move rapidly toward $5.00/MMBtu or above as confidence rises in the potential for severe cold and potential storage risks, he said.

Furthermore, any truly frigid air would likely lead to pipeline freeze-offs. Freeze-offs can rapidly depress output by several Bcf/d and keep output levels subdued long after the coldest weather passes, EBW said. “Last winter, production plunged by 3.5 Bcf/d to start the new year as extreme cold led to production freeze-offs. News of a rapid plunge in output this year may spark a rally in a market already concerned about supply adequacy.”

Indeed, the dismal storage picture has continued to deteriorate given the chilly start to the winter season. Based on storage data through Nov. 30, when inventories stood at 2,991 Bcf, RBN Energy said the market would have to withdraw no more than 1,638 Bcf total (the equivalent of 13.7 Bcf/d) in the 120 days between Dec. 1 and March 30 in order to get to last year’s end-of-March benchmark of 1,354 Bcf. In order to get to the five-year average level of 1,630 Bcf, the market would have to keep withdrawals to 1,362 Bcf, or just 11 Bcf/d over that period.

“Over the past five years, the lowest daily average withdrawal over that period was 12 Bcf/d in 2015-16, when the market experienced a relatively mild winter. But daily average withdrawals have been in the 15-20 Bcf/d range the past two winters,” natural gas analyst Sheetal Nasta said. “So, for this year’s inventories to withdraw no more than 11-14 Bcf/d would require the supply-demand balance to be considerably looser than the past two years.”

The bottom line is that unless weather-related consumption comes in on the low end of recent years during what are typically the coldest months of the year, the inventory is likely to remain at a deficit to year-ago and five-year levels through March 2019 at least, according to RBN. “And, an ongoing deficit past withdrawal season could extend price volatility well into 2019,” Nasta said.

While there is no sure fire way to say how consumption will pan out for the remainder of winter, some analysts say production will have to step up to help improve persistent storage deficits. While at the beginning of November, Jefferies equity research analysts thought a normal winter could leave gas storage near average by March, the early arrival of winter weather, resilient power burn, and growing liquefied natural gas (LNG) exports have kept natural gas storage well below average despite production that continues to reach new highs.

The Energy Information Administration on Thursday reported a withdrawal of 77 Bcf for the week ending Dec. 7 that left inventories at 2,914 Bcf.

“During November/December, the storage deficit has widened further, from around 620 Bcf (roughly 17%) below average at the beginning of November to 760 Bcf (21%) below average after this week’s 77 Bcf withdrawal,” analysts said.

Utilizing five-year average residential/commercial demand to normalize for weather and recent levels for other demand factors, “we believe that production needs to average 11-12 Bcf/d higher year/year for the remainder of winter for storage to reach average by the end of March, implying production of about 89 Bcf/d, well above the recent highs of 86-87 Bcf/d,” analysts said.

Indeed, several pipeline maintenance events have been impacting production for the last couple of weeks, according to Genscape Inc. The firm’s daily pipe production estimate showed volumes hitting a new record high of 88.1 Bcf/d on Nov. 30, but output through Dec. 11 posted average daily day/day swings of more than 0.52 Bcf/d.

Still, while “production, LNG, Mexico, etc. all matter, price action has been and will continue to be mostly driven by weather in the near term,” Genscape natural gas analyst Eric Fell said. “So pay attention to what the models are doing” and to what various weather forecasters are saying.

Taking a closer look at the regional forward curves, double-digit losses were the norm across most of the country, but markets out West and in the Rockies posted far more substantial declines amid increasing Canadian imports via Enbridge Inc.’s Westcoast Transmission as well as lighter demand.

Northwest Sumas January prices plunged $1.24 from Dec. 6-12 to reach $6.134, while the balance of winter tumbled 29 cents to $4.00, according to Forward Look. By comparison, spot gas prices at Northwest Sumas averaged $5.41 for Thursday’s gas flow.

Permian Basin pricing remained weaker than other markets across the country amid ongoing takeaway issues in the region that are expected to remain prevalent until late next year. Waha fell 36 cents from Dec. 6-12 to reach $1.006, and the balance of winter slipped 21 cents to just 92 cents, Forward Look data show.

Interestingly, despite the lack of adequate infrastructure out of the Permian for both natural gas and crude oil, the rig count in the region rose by 2 for the week ending Dec. 12, according to DrillingInfo. A more granular look at the number of rigs in the Permian shows that in the last month, Permian-New Mexico had its highest counts of active rigs in recent history, with 107 active as of last week.

“The next closest count outside the last month was 101 active in the last week of 2014 where West Texas Intermediate (WTI) was at $57/bbl and at the halfway point of the two-year price collapse,” DrillingInfo said.

The difference between now and 2014 is the point from which WTI prices fell, the cost to extract hydrocarbons and the permitting within the two workhorses for New Mexico — Eddy and Lea County, according to the firm. A total of 1,670 permits have been filed in the two counties so far this year, compared to 1,269 in 2014.

“Given the current number of active, undrilled permits in Eddy and Lea, and the current WTI price that is still well above the average breakeven price for the pair, there is optimism for the drilling to continue as it has been,” DrillingInfo said.

While sharp spikes are common in New England, another noteworthy increase occurred at Dominion Energy Cove Point, where January shot up 17 cents to $8.384. The remaining winter months strengthened as well, though gains were limited. February rose 6 cents to $8.114, and March edged up a penny to $6.22, according to Forward Look.

Genscape’s LNG team confirmed the BW GDF Suez Brussels recently unloaded a cargo at Dominion Energy’s Cove Point liquefaction facility. The group’s derived estimate of storage at Cove Point at that time had inventory sitting at around 6 Bcf, which indicated there was enough space to accept a cargo.

Cove Point LNG storage represents both time and location optionality as the imported LNG can either be withdrawn/gasified and sent out locally on strong Transco Z5 cash days, or be put back on a boat and re-exported anywhere in the world, he said. “Transco Z5 storage can be very valuable if we get come crazy cold weather on the east coast as evidenced by Transco Z5 cash averaging $41 over a 13-day period from Dec. 27 to Jan. 8 last winter.”