While many folks across the United States celebrated the Independence Day holiday gorging on hot dogs and hamburgers, natural gas market bears proved to be still ravenous after the holiday, sending August forward prices down an average 14 cents between June 30 and July 6, according to NGI’s Forward Look. 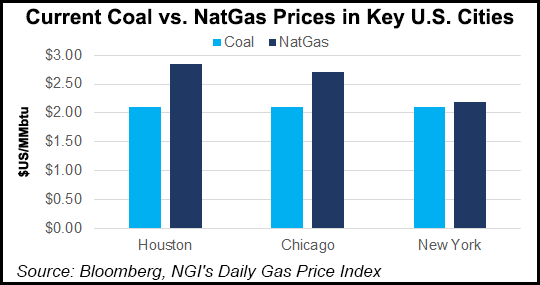 The dramatic declines came early in the week as Nymex futures on Monday lost 8 cents at the front of the curve as significant, sustained heat continues to elude the premium East markets. Wednesday brought about even more pronounced losses and even though weather forecasts turned slightly more constructive, Thursday’s modest recovery did little to quell the damage already done to markets.

NGI offices — along with the futures markets — were closed Monday and Tuesday in observance of the Independence Day holiday.

The Nymex August futures contract tumbled 14.7 cents from June 30 to July 6 to settle at $2.888, while both September and balance-of-the-summer (September-October) futures slid 15 cents each to $2.88 and $2.90, respectively. The prompt-winter strip also posted double-digit declines, falling 14 cents to $3.13, but smaller declines were seen beyond 2018.

Traders continue to keep a watchful eye on weather trends for the remainder of July, especially as this is the month that summer cooling demand typically peaks. And while there does appear to be significant heat in the forecast, it’s where that heat is located — and more importantly, where it’s not — that has the markets unsatisfied.

Early in the week, a hot upper ridge is expected to blanket the west-central U.S., strengthening and expanding over the Plains, Great Lakes and Southeast, NatGasWeather forecasters said. The weather pattern is rather intimidating, with high temperatures expected to reach mid-90s to low 100s.

“However, the core of the most intense heat has yet to show it will be able to shift far enough over the East Coast to drive much stronger-than-normal demand. Close, but not quite,” NatGasWeather said.

So while the weather pattern should not be considered a bearish pattern, and has potential to tilt to the bullish side, it would just be more impressive if it were a little hotter over the East, NatGasWeather said.

Indeed, data and analytics company Genscape Inc. said that its preliminary estimate of power demand on Thursday was at 36.6 Bcf/d, the highest since early September 2016. Last year, that level was reached by June 20. “That said, top-day estimates for power burn do get revised after we incorporate proprietary burn observations followed by no-notice data,” Genscape said.

Still, the Louisville, KY-based company said it has reduced its load forecasts for the coming week. While national population weighted cooling degree days (CDDs) are forecast to run slightly above normal through the next 10 days, the bulk of any heat is out West, it said. Southeast/Mid-Atlantic temps are forecast to run at seasonal levels, while major Midwest and Northeast markets are forecast to see slightly cooler-than-normal CDDs in the forecast period.

“Accordingly, Genscape Daily Supply & Demand shows Lower 48 power demand dropping slightly to 35.7 Bcf/d Friday and not returning to that level until the end of next week at the earliest,” Genscape said.

Meanwhile, Friday’s storage report (delayed by a day due to the July 4 holiday) offered another blow to the markets, although reaction to the bearish report was somewhat delayed. The U.S. Energy Information Administration reported a 72 Bcf injection into storage for the week ending June 30, well above market consensus in the mid-60 Bcf range. At 2,888 Bcf, stocks were 285 Bcf less than last year at this time and 187 Bcf above the five-year average of 2,701 Bcf.

Looking to the weeks ahead, analysts with Mobius Risk Group said storage reports in the coming weeks could continue to be bearish for the market. During the same week in 2016, 38 Bcf was injected into storage.

“The subsequent four weeks in 2016 had a cumulative injection of 116 Bcf, a practically untouchable level this year unless extreme heat were to overtake the Southeastern U.S.,” Houston-based Mobius analysts said.

Taking a closer look at forward markets, steep losses were widespread across most of the country, but Northeast markets found some support as the previously announced in-service of Energy Transfer Partners’ (ETP) Rover Pipeline quickly approaches.

Already, production has been on the upswing, hovering around 72 Bcf/d as supply from increased drilling activity has begun to hit the market. The increase in production may also be a reflection of the anticipation of the startup of Rover as producers begin to ramp production to meet transportation commitments, BTU Analytics’ Marissa Anderson said in a July 6 blog post.

But Rover’s in-service remains unclear as the U.S. Federal Energy Regulatory Commission in May ordered ETP to halt all new HDD work on its 710-mile greenfield mega-project after reports of a 2 million gallon drilling fluid spill at a site near the Tuscarawas River in Stark County, OH. The order, affecting important uncompleted facilities for the project, including the Clarington Lateral, spurred market speculation that the project would be delayed.

The Commission has since said it is investigating the Tuscarawas spill after test results indicated the presence of diesel fuel in the drilling mud. Using diesel in HDD drilling fluid would be a violation Rover’s FERC certificate.

ETP has stuck to a tight schedule for its producer-backed Appalachian takeaway project, which would connect producing areas of Ohio, West Virginia and Pennsylvania to interconnects with the Midwest Hub in Defiance, OH, as well as the Vector Pipeline in Michigan and the Dawn Hub in Ontario.

Phase 1 service to Defiance was originally scheduled to start in July, with the rest of the project online by November. But after FERC denied its request to finish HDD crossings for the Clarington and Seneca laterals, ETP revised its schedule to target partial Phase 1 start-up in early July, with the rest of Phase 1 coming online within 60 days.

Genscape, however, has said it does not believe Rover’s initial start-up will be in service until early August, with the rest of Phase 1 pushed back to September.

On June 28, ETP once again asked FERC to allow it to resume horizontal directional drilling (HDD) at remaining sites.

The most notable price differences in the forward curve occurred at Tennessee zone 4 Marcellus, where August forward prices fell 6.4 cents from June 30 to July 6 to reach $1.777, according to Forward Look. By comparison, the national average decline for August forward prices during that same time was 14.2 cents.

NGI’s Patrick Rau, director of strategy and research, offered another possible explanation for the comparative support in the Northeast. With gas prices in the Northeast falling to around $2.20 in the last couple of days, gas becomes more competitive with coal, which is only around a dime cheaper in the population-dense New York City.

“Gas doesn’t compete with coal across much of the country, but it is becoming more competitive in the Northeast,” Rau said.

While increased use of natural gas for power demand is competing well with coal in the Northeast, it “may not have a huge impact on national gas prices for the remainder of the summer,” Rau said.