There was no spectacular fireworks show for natural gas forwards markets the first week of the new year as bleak prospects for cold weather later this month sent the February prompt month barreling down an average of 56 cents between Dec. 30 and Jan. 5, according to NGI Forward Look. 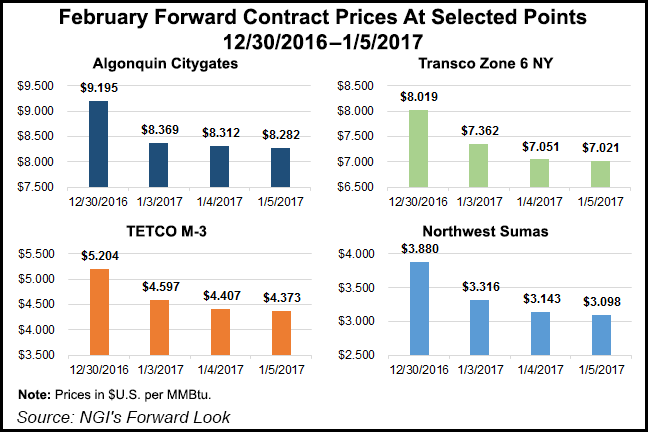 “The market got too long. Managed money got long, and it hit every newswire, and they got it handed to them,” a Northeast trader said.

NGI’s Patrick Rau, director of strategy and research, agreed, noting that stochastics were above 70 this week, which indicated that the market was overbought, so the sudden and severe price drop was indeed the result of an overbought market.

As it relates to trading, a stochastic oscillator is a technical momentum indicator that compares a security’s closing price to its price range over a given time period.

“The contact basically got to $4, but it didn’t break through. From a technical standpoint, that is going to be a tough nut to crack,” Rau said.

Weather has also been so back and forth, leading to extreme swings in the market, the trader said. “That’s good for volatility funds, but bad for the rest of the market,” he said.

Indeed, weather forecasters at NatGasWeather said that after the current frigid blast plays out into Monday, weather patterns will turn unseasonably warm again for Jan. 10-19 over the most important natural gas regions, providing bearish weather headwinds to gas prices.

“It will be quite important colder weather systems show promise in arriving into the northern or eastern U.S. the last 10 days of January, or this could lead to another round of market disappointment with further price destruction,” NatGasWeather said.

If this week’s dramatic slide is any indication, things could get ugly quickly for natural gas prices. The Nymex February contract shed nearly 40 cents on Jan. 3 alone and continued to trim back the next day, although to a far lesser degree.

“I’m a buyer. I think they overdid it,” said Alan Harry, director of trading at McNamara Options LLC, of the two-day tumble. For the entire Dec. 30-Jan. 5 period, the Nymex February contract plunged a stout 45 cents.

The futures and forwards markets did get a reprieve from the freefall on Thursday when the most recent weather data trended colder for the current weather system sweeping across the country, and one weather model turned just slightly more bullish for the longer term.

“By the end of the week, almost the entire country will be colder than normal by 10-30 [degrees] Fahrenheit. With temperatures below zero to lower teens over the north, and teens to 30s over the South and East, nat gas demand will be strong through Monday,” NatGasWeather said.

Meanwhile, forecasters at Bespoke Weather Services said the latest European weather model indicated far less ridging over the East in the next couple of weeks, which perhaps contributed to Thursday’s rather supportive close for futures. “GFS [Global Forecast System] guidance continued to show widespread ridging, however, as did CMC [Canadian Meteorological Center] operational guidance, meaning there is a risk that recent ECMWF [European Center for Medium-Range Weather Forecasting] output is more of an outlier still,” Bespoke said.

After plunging to a new low following a bearish storage report, the Nymex February contract rallied to settle essentially flat on the day at $3.273. The U.S. Energy Information Administration reported a -49 Bcf draw from storage for the week ending Dec. 30, far below the -72 Bcf consensus.

“Storage was definitely a surprise and appears now to be heading back toward the five-year average. I think the miss may have to do with weather forecasters having difficulty pinning down their expectations for the rest of winter,” said NGI’s Nate Harrison, markets analyst. Indeed, storage inventories were 364 Bcf less than last year at this time and just 21 Bcf below the five-year average of 3,332 Bcf. At 3,311 Bcf, total working gas is within the five-year historical range, EIA said.

Bespoke said the -49 Bcf draw was bearish when compared to the -236 Bcf print last week. But even though the market lost 55 total degree days on a week-over-week basis, that alone certainly did not make up the difference, as demand must have significantly fallen off over the holiday weekend, it said.

“This level of loosening easily opens up another leg lower in gas prices as the supply-demand balance is now looser than a year ago, the weather forecaster said.

A move even lower appeared to be on the backburner early Friday as the Nymex February contract was trading about 1 cent higher by midday. “We can’t take prices too low, or we bring back power burn that we don’t need this year,” the trader said.

Looking ahead, NatGasWeather said “another bad number” is likely in next week’s storage report, before evaluating again the status of supply-demand balance with the storage related to the frigid shot hitting the U.S. right now. “In fact, yesterday’s power burns were way tighter compared to the end of last week at 26 Bcf, in line with recent positive correlation between power burns and cold weather,” it said. The weather forecaster said it expects next week’s draw to come in slightly below the five-year average as it will be factoring in mild conditions to start, and then cool to finish.

And while the next two storage reports will indeed have a bit more cold risk in each of them, from there, widespread warmth focused in the South and Southeast could exacerbate storage concerns into the end of the month, providing an upward cap for natural gas prices, Bespoke said.

“Traders seemed to shrug these concerns off yesterday as prices reversed late in the day on decent volume, seemingly led a bit higher by small additions in bullish weather risk on European guidance,” Bespoke said. “In fact, forecasts appear bearish enough that almost any bullish weather risk addition is likely to translate into immediate short-covering, though most forecasts show so little that we still see risk lower towards $3.10 into the weekend.”

Diving further into the forwards markets, the prior week’s modest gains in the Northeast compared to the rest of the country were a glimpse into what was to come as the region’s losses this week (Dec. 30-Jan. 5) were also comparatively more significant than their counterparts.

Meanwhile, markets in the Pacific Northwest retracted the previous week’s hefty gains and posted losses this week that rivaled those across the country. The Northwest Pipeline-Sumas February forward price tumbled 78 cents between Dec. 30 and Jan. 5 to reach $3.10, the March forward price fell 56 cents to $2.63 and the summer 2017 dropped 34 cents to $2.54. The winter 2017-2018 forward strip was down 27 cents to $3.26, according to Forward Look.

The sharp declines come as the Bonneville Power Administration has reported that hydro output has trended 15% above the five-year average this year-to-date, and the region may see heavy precipitation in the coming days.