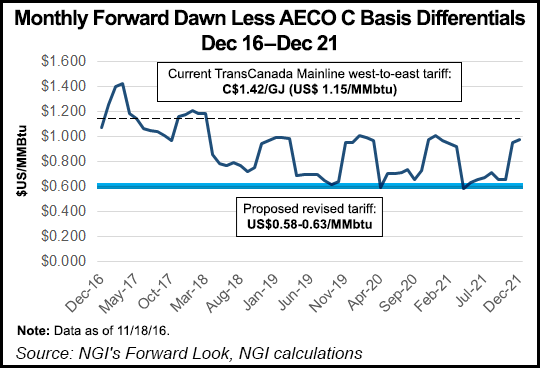 Forwards markets took a cue from the Nymex, where December futures started the week with a double-digit rally, but then flip-flopped throughout the week to close Thursday at $2.70, up 8.5 cents for the week.

Forecasts were calling for the first relatively winter-like storm and cold blast of the season to track across the U.S. late last week and into this week. The system began impacting the west-central U.S. last Thursday with rain and snow.

“With overnight lows dropping below zero as far south as northern Texas, along with teens and 20s over the Plains and Midwest, nat gas demand will surge to the strongest levels so far this fall season,” forecasters with NatGasWeather said. Indeed, data and analytics company Genscape shows Appalachian demand averaging 13.78 Bcf/d between Nov. 21 and 25, peaking at 15.42 Bcf/d on Monday. Demand averaged just 10.06 Bcf/d last week.

The frigid temperatures are expected to be short lived, however, as a milder break is expected during the middle of this week before another weather system tracks across the country late during Thanksgiving week.

“We continue to expect at least modest blasts of cooling into early December to keep the active pattern going, but with mild high pressure setting up in between weather systems, weekly averaged HDD totals are likely to be near normal,” NatGasWeather said. The weather forecaster said it is difficult to determine if temperatures over the next two weeks will be enough to satisfy what they view as “very impatient natgas markets.”

“We expect this more active U.S. pattern will bring strong enough swings in temperatures to bring near-normal draws on supplies, but only after next week again comes in above the five-year average, the third week in a row of doing so,” NatGasWeather said.

Indeed, the U.S. Energy Information Administration reported a 30 Bcf build in natural gas storage inventories for the week ending Nov. 4, slightly above expectations and expanding upon already record supplies. With the most recent build, inventories stand at 4.047 Tcf, 1.3% above year-ago levels and 5.6% above the five-year average.

Early expectations for this week’s storage report indicate gas stocks will likely continue to grow. “Preliminary indications suggest the expected range for next week will be between a 1 Bcf withdrawal and a 15 Bcf build,” analysts with Mobius Risk Group said. The Houston-based company noted that analyst expectations tend to widen as the market transitions from injections to withdrawals.

Meanwhile, medium- and long-term forecasts remain rather bearish, with much of the country expected to see above-normal temperatures, forecasters at Bespoke Weather Services said.

“GFS ensemble guidance continued to show some lingering bullish risk across the East on Day 12, when below-average temperatures in key population areas across the East Coast could cancel out warmer weather across the center of the country that is rather high conﬁdence. Both trends break down by Day 14, but the CPC analog and forecast show that only the Southeast has any real cold risk,” Bespoke said.

Interestingly, SEMA (Southeast and Mid-Atlantic) demand has been suppressed so far this winter season amid warmer-than-average temperatures, according to Genscape. Season to date, demand across the region is averaging 12.8 Bcf/d of consumption, compared to 13.9 Bcf/d last year, the Louisville, KY-based company said. This dip in demand can be attributed almost entirely to temperatures.

“Looking to average temperatures across the region, SEMA has amassed roughly 22 HDDs thus far in November compared to 66 last year. Current forecasts have temperatures remaining warmer than average for the next few days before dipping amidst a cold snap over the weekend,” Genscape said.

The company projects SEMA demand peaking at 17.58 Bcf/d on Monday after averaging a little over 14 Bcf/d last week. Over the entire Thanksgiving holiday week, Genscape projects demand to average 15.70 Bcf/d. Even without lasting cold, futures and most forwards markets swung to the upside last week as other factors likely weighed on the market.

Mobius said part of the week’s rally could be attributed to speculative interest that either looked to lock in profits on a recent blowout in the December-January spread, or enter the trade at historically wide levels.

Analysts at Jefferies, meanwhile, point to persistent signs of tighter markets like lower overall U.S. production, which is down around 2 Bcf/d year on year, low rig completion activity and a lack of enthusiasm from producers wanting to reinvest in natural gas. “The chances of getting caught short are only rising amid consistent export increases (exports to Mexico, LNG train additions),” Jefferies said.

LNG feedgas into Cheniere’s Sabine Pass facility continues to climb, reaching a new all-time high last week, at 1.58 Bcf/d, Jefferies said. Over the past two weeks, LNG feedgas has averaged more than 1.5 Bcf/d, as Sabine Pass has ramped up from the month of scheduled downtime in late September-early October. Trains 1 and 2 at the facility are likely now running at near full capacity, with Train 3 scheduled for a 2Q17 start-up.

The strength in the forwards and futures market was concentrated at the front of the curve. The Nymex December futures contract was up about 8.5 cents between Nov. 11 and 17, January was up 2 cents and the balance of winter (January-March) was up 3 cents. Nationally, forward prices at most market hubs posted similar increases.

Interestingly, forwards markets in the Northeast posted some significant declines across the curve during the week, even as some of the coldest weather was expected to hit that region.

At New England’s Algonquin Gas Transmission citygates, December forward prices dropped 11 cents during that time to reach $3.60, while January tumbled 23 cents to $6.75 and the balance of winter slid 12 cents to $5.97.

Perhaps the dramatic price slide is a matter of “too little, too late.” AccuWeather showed temperatures in population-dense New York hitting near seasonal levels on only a handful of days so far this month, while other days have seen temperatures soar as much as 14 degrees above normal.

While this past weekend’s cold snap dropped daytime temperatures to the 40s and overnight lows to the 30s, there are more days of above-average temperatures in the forecast for the remainder of the month.

And with gas storage inventories at all-time highs, and stocks of other wintertime competing fuels like propane and oil also near record levels, at least some in the market see little reason for prices in the region to rise.

“We just need some normal weather to get things back in line,” a Northeast trader said. Already, it seems like the market has written off winter. In fact, the Nymex balance-of-winter strip flipped to a discount to the summer 2017 strip on Nov. 8 and remained there as of Nov. 17, at $2.91 versus $2.97.

“The winter has gotten written off pretty hard, but November is only like 14% of total winter HDDs. There’s lot of time,” the trader said. But if winter doesn’t show up, the market will “kill it one month at a time.”

Meanwhile, it appears that TransCanada’s announcement that it failed to successfully close an open season for a new fixed priced toll on its Canadian Mainline did little to support prices. The Mainline stretches from the Empress receipt point in Alberta to the Dawn Hub in southern Ontario. “This effectively means that U.S. gas will face less competition from Canada, gas which should support U.S. natural gas prices in the years ahead,” Barclays said in a Wednesday note to clients.

TransCanada had been offering shippers the option to sign up for a 10-year contract to pay between 57 cents/MMBtu and 62 cents/MMBtu, depending upon their volume commitment. This compares to existing firm transport rates of $1.30/MMBtu.

Barclays said both TransCanada and its shippers could return to the negotiating table at some point.

“There is a possibility that the shippers were holding out for a better deal, or simply believed that a handful of larger players would satisfy the open season requirements, allowing them to benefit from stronger AECO pricing without making a meaningful commitment,” Barclays said. “With limited outlets for Canadian producers, they may end up back at the negotiating table; however, given regulatory timetables, it now seems unlikely that a new tolling structure will be in place by the originally planned date of November 2017.”