August natural gas forward markets rose an average 4.3 cents between July 14 and 20 as scorching temperatures last week lifted power burn to the highest levels of the summer so far, while longer-term weather forecasts continued to show some cooling in key demand regions, according to NGI’s Forward Look. 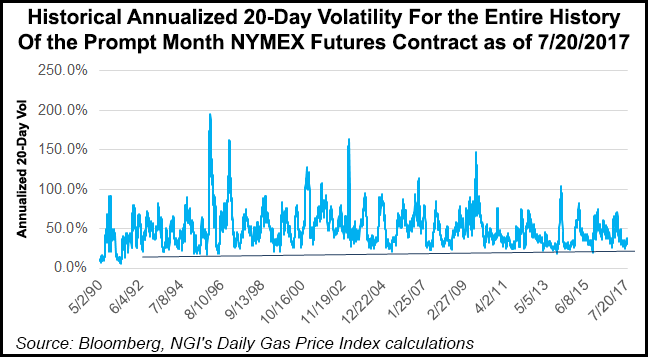 Trading was rather ho-hum throughout the week as the Nymex August futures contract swung less than five cents on each of the last five sessions. August futures ultimately gained 6 cents from July 14-20 to reach $3.043, September climbed 6 cents to $3.033, the balance of summer (September to October) rose 8 cents to $3.05 and the winter 2017-2018 edged up 4 cents to $3.29.

“To say this market is range-bound would be the understatement of the millennium,” CenterPoint’s Gerald Wellman said.

Last week’s gains, no matter how modest, came as high pressure dominated much of the United States, driving power burns to 41.3 Bcf/d on July 20, a year-to-date high and not far below last year’s all-time record 41.9 Bcf/d set on August 11. Month-to-date power burns are averaging 35.2 Bcf/d, 0.3 Bcf/d above last July.

“Toss increasing demand from liquefied natural gas exports (+1.5 Bcf/d [year over year]) and exports to Mexico (+0.4 Bcf/d YOY) into the mix that has resulted in a 2 Bcf/d jump in total U.S. demand this July versus last July, and you have the perfect recipe for a market rebound,” Wellman said.

But as NGI has noted before, weather will be key going forward, and varying weather models continue to keep market experts scratching their heads. NatGasWeather is calling for cooling demand to ease to more seasonal levels early in the week when weather systems with showers and cooling sweep across the Great Lakes and Northeast. The warm ridge is expected to regain ground over the east-central U.S. during the middle of the week for a modest bump in national demand before additional weather systems return across the North and East late in the week through the following weekend (July 28-30).

“If cooling were to follow over the East during the first week of August, the markets would likely be at least somewhat disappointed even though the western, central, and southern U.S. will remain hot with 90s and 100s,” NatGasWeather said.

Production is also keeping the pressure on natural gas prices as U.S. dry production set a record of its own during the week, reaching 72.7 Bcf/d on July 19. Month-to-date, dry gas production is averaging 72.5 Bcf/d, up 0.8 Bcf/d from the same period last July.

Producers took advantage of the rebound in prices in late 2016, hedged and doubled the gas rig count, which is now fuelling a steady increase in production, a BofA Merrill Lynch Global Research report said Friday. This is an important development and after declining in 2015 and 2016, U.S. domestic natural gas output will likely increase again this year and next, the report said.

Still, CenterPoint’s Wellman said production totals continue to lag behind forecasts that called for higher output totals in 2017, as delays on a number of pipeline projects in the Northeast, including the 3 Bcf/d Rover Pipeline, has limited the recovery in dry gas production.

The marginal break-even sits in the $3-3.25/MMBtu range, above the three-year rolling forward strip of $2.90. The Barnett, large parts of the Fayetteville and the Rockies are off limits to producers. Internal rates of return in the Haynesville are just below 10%, the lowest since November, the BofA Merrill Lynch Global Research report said.

“If prices remain this low, rig count gains could stall or reverse. Even if nat gas prices were to increase sharply from here, additional supplies would not come in time for the winter given an estimated six-month lag from production to prices. With forward oil prices so low, associated gas production growth will likely also slow,” the report said.

The bank overall remains optimistic for a market rebound as underlying fundamentals are painting a far more positive picture. One example is storage.

On Thursday, the U.S. Energy Information Administration reported a 28 Bcf build into storage inventories for the week ending July 14, below market consensus. Inventories now stand at 2,973 Bcf and are 299 Bcf less than last year and 141 Bcf greater than the five-year average.

The stockpile gain of 28 Bcf was 10 Bcf lower than the same week last year, 31 Bcf lower than the five-year average and 3 Bcf lower than market expectations, analysts at Houston-based Mobius Risk Group said. “The apathetic price response shows how significant technical resistance is at the moment,” Mobius said late Thursday.

BofA Merrill Lynch agreed, saying it expects the seasonal surplus to be eradicated by early August and end-of-October stocks to sit at just 3.5 Tcf, the tightest level since 2008. “We believe supply rationing will set in later this year and drive prices substantially higher,” it said.

Prices have to be substantially higher than last year in order to curb demand when demand and exports increase structurally, the bank said. “The market has taken the opposite view and bid down prices to generate a coal-to-gas switch. Instead, we believe that supply will have to be rationed in the power sector in order to balance the market, although the recent shutdown of coal capacity should make this challenging. All told, we continue to see upside to near-dated U.S. natural gas prices,” the BofA Merrill Lynch Global Research report said.

Taking a deeper dive into forward curves across the country, there were no real surprises. There was, however, a rather significant response to news that Energy Transfer Partners LP’s (ETP) Rover Pipeline, which had been scheduled to start service in July, would be delayed by a couple of months at least.

The company said the initial start-up for Rover could be pushed back to “late summer” due to recent regulatory setbacks, including a directive which outlined several clean-up and mitigation activities ETP/Rover would have to complete before receiving in-service authorization.

The requirements follow a roughly 2 million gallon drilling fluids spill that occurred during Rover construction near the Tuscarawas River in Stark County, OH. Citing the scope of the spill, the Federal Energy Regulatory Commission issued a moratorium on new horizontal directional drilling for the project pending an independent review.

A 3.25 Bcf/d, 710-mile greenfield project aimed at transporting Marcellus and Utica shale gas to markets in the Midwest, Gulf Coast and Canada, Rover could uncork large volumes of Appalachian production and reshape the natural gas supply landscape once in service.

The project is scheduled to come online in two phases this year. Phase 1 — including supply gathering in the western Appalachian Basin and a mainline connection to the Midwest Hub in Defiance, OH — was originally scheduled to come online this month. Phase 2 would see Rover extend service to an interconnect with the Vector Pipeline in Michigan, which will also allow shippers to reach the Dawn Hub in Ontario.

Rover said at this time, it does not anticipate any delays to the November 2017 in-service date on Phase 2. Still, the delay, and lack of clarity of when the pipeline could begin service, led to a swift reaction in several markets.

At Dominion, a major pricing point for Appalachian supply, August forward prices fell 8 cents from July 14 to 20 to reach $1.91, September plunged 18 cents to $1.826 and the balance of summer (September-October) tumbled 10 cents to $1.90. Nationally, August forward prices rose an average 4 cents, September rose an average 3 cents and the balance of summer moved up an average 5 cents, according to Forward Look. The dramatic weakness in Dominion forward prices clearly illustrates the trapped supply stemming from the pipeline’s delay.

Dominion forward prices for the winter 2017-2018 climbed 4 cents during that time to $2.72, a move that was more in line with the rest of the country.

Meanwhile, Dawn Hub in Ontario had an almost completely opposite reaction to the Rover news as less supply will reach that demand center for the next couple of months at least. Dawn August forward prices jumped 9.6 cents from July 14 to 20 to reach $2.985, September rose 9 cents to $2.97 and the balance of summer (September-October) gained 10 cents to hit $2.98. The prompt winter was up 5 cents to $3.44, Forward Look data shows.