Natural gas forwards markets tallied a second consecutive week of gains as a larger-than-expected storage withdrawal and bullish revisions to weather models kept April forwards alive and well, pushing up the prompt month an average 14.5 cents between March 3 and 9, according to NGI’s Forward Look. 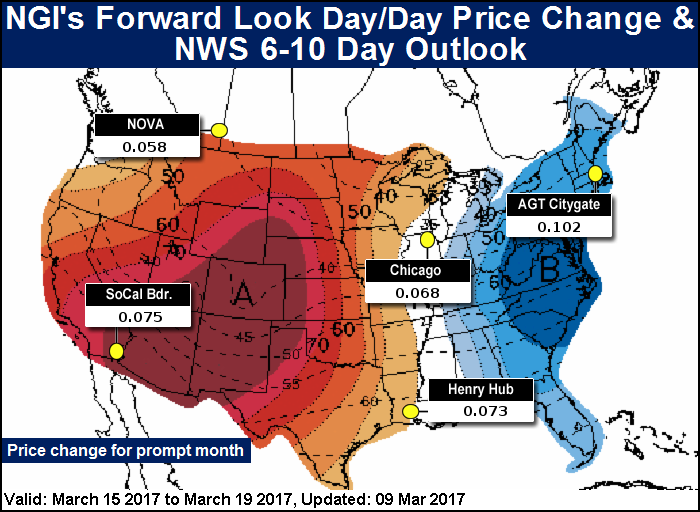 Forwards prices during the week essentially mirrored the trend seen in the Nymex futures curve, where April futures climbed 15 cents during that time to settle Thursday at $2.974. May futures climbed 11 cents over the four-day run to reach $3.045, the balance of summer (May-October) rose 8 cents to $3.16 and the winter 2017-2018 strip tacked on 5 cents to $3.385.

The recent rally in natural gas prices is a bit surprising given the lack of sustained cold weather experienced much of this winter and with the spring shoulder season just days away. But forecasts for a series of cold blasts are proving to be supportive for the gas market. The April futures contract’s Thursday $2.974 settle was a three-week high and above the 200-day moving average for the first time since Feb. 15, according to Houston-based Mobius Risk Group.

The first in that series of cold blasts on Friday was pushing across the northern United States, driving the strongest natural gas demand seen in numerous weeks as low temperatures drop into the teens to below 0 degrees Fahrenheit, according to forecaster NatGasWeather. This will be followed by a potent eastern U.S. winter storm and associated cold shot Tuesday through Thursday, which will be accompanied heavy rain, snow, and gusty winds.

The pattern March 21-25 is still expected to bring a mix of cool and mild periods across the northern and eastern U.S., while the southern U.S. remains warm, thus requiring some demand for both heating and cooling. If temperatures were to trend over the weekend break, it would be toward a little stronger cooling and the addition of heating degree days [HDD] late in the week and beyond, NatGasWeather said Friday.

After March 25 is when things become less clear. The Canadian long-range weather model ensembles show a more zonal pattern where temperatures are closer to average, while the European ensembles have increased bearish risk, and they have been performing quite as well, according to Bespoke Weather Services. Climate models showed the succeeding 10 days or so could see colder weather before a ﬂip back warmer.

“With short and medium-term cold still quite likely, we expect a run up to at least around $3.10 for April natural gas prices into early next week, though the risk of a late March ﬂip back to mild weather could help resistance hold,” Harrison, NY-based Bespoke said.

NatGasWeather forecasters agreed that weather is key to whether the recent rally in prices is sustained. “After sharp price gains the past two days, prices are now testing $3 in overnight trade, which seems like an important psychological level to overcome,” the forecaster said Friday morning. “When the markets return next week, they will be evaluating the effects of the weekend cold outbreak, while looking into the eyes of a developing winter storm that will impact the East.”

Traders also will have to consider the state of storage inventories as the end of the traditional withdrawal season nears (on March 31). The latest storage report from the U.S. Energy Information Administration showed a 68 Bcf withdrawal from storage for the week ending March 3, higher than market estimates in the low 60s Bcf range. Four Bcf of that represented a reclassification of working gas to base case, thus making the actual flow 4 Bcf less. Nevertheless, bulls seized the day and at the close, April had added 7.3 cents to $2.974, and May was up 6.5 cents to $3.046.

Inventories now stand at 2,295 Bcf, 192 Bcf less than last year but 363 Bcf greater than the five-year average. And the upcoming storage report, which is expected to be rather light, could elevate the surplus over the five-year average to near +400 Bcf, NatGasWeather said. Thereafter, the coming cold blasts will be accounted for in the next two reports to drop the overhang back to about +300 Bcf, it said.

“We expect additional decreases in surpluses in the weeks after, so it’s now up to the markets to determine if that warrants prices taking out $3,” the forecaster said midday Friday.

Bespoke Weather Services echoed that sentiment, saying that some fairly large drawdowns for a market that has been placed into a state of oversupply by a record warm February could work to balance the market more into April. “Of course, much depends on just how long the cold will stick around,” Bespoke said.

The Nymex April futures flirted on either side of $3 throughout the day Friday, ultimately settling the regular session at $3.008, up 3.4 cents from Thursday’s finish.

From an exploration and production perspective, the recent rally in natural gas prices is a prime opportunity for producers to add to their positions. While many exploration and production companies established capex budgets for 2017 based on $50-55 WTI and $3.00 Henry Hub, the past few weeks have shown how volatile gas prices can be, and how much they can fall if fundamentals don’t cooperate, said NGI’s Patrick Rau, director of strategy and research.

“Given that, I bet more gas-focused producers will lock in more gas amid this mini rally, since that will help ensure achieving that $3.00 Nymex price,” Rau said.

Oil-focused producers may not be in quite the hurry to hedge, since gas isn’t their primary revenue stream, Rau said. Associated gas can be a “free” source of income for them, so they are more likely to accept whatever the market bears for that gas. Even some of those may lock in some gas prices amid this little price uptick; however, since the operating mantra these days is to spend within cash flow in order to protect balance sheets, he said.

“If they lock in gas at a higher price, they lock in a little more cash flow. They may also look to hedge a bit more gas given the recent slide in oil prices,” Rau said.

U.S. producers continue to add gas focused rigs, with another five going into service the week ended March 10, according to Baker Hughes Inc. data. The current gas rig count now stands at 151, just two off the recent high on February 17, and nearly double the cyclical low of 81 rigs in service in late August 2016.

Delving further into the markets, Dominion South saw a jump in winter 2017-2018 prices as Dominion said its highly delayed New Market project is expected to be in service in late 2017. Despite receiving Federal Energy Regulatory Commission approval in April 2016, missing air state facility permits from the New York Department of Environmental Conservation stalled construction and inevitably lead to severe delays to the November 2016 in-service date, according to data and analytics company Genscape Inc.

The NYDEC finally issued the permits for the Horsehead, Sheds, and Brookman Corners Compressor stations on Dec. 23, 2016, however, Dominion did not provide an updated timeline in the bi-weekly reports or in its Q4 2016 earnings call held Feb. 1, Genscape said. The 10-K filed with the Securities and Exchange Commission on Feb. 28 finally gave an update — the project facilities are expected to be in service late 2017.

Although Dominion has yet to update the timeline on the project homepage, the most recent biweekly construction report filed on Feb. 24 indicates the project is headed in a promising direction. Dominion conducted environmental training and held pre-construction meetings on Feb. 8, signaling construction is on the horizon, Louisville, KY-based Genscape said.

Dominion South forward prices were generally higher than Nymex futures across the curve, but the winter 2017-2018 strip — which corresponds to the expected in-service of the New Market project — saw considerably stronger increases. Dominion South April forward prices rose 20.6 cents between March 3 and 9 to reach $2.43; May forwards climbed 16 cents to $2.33; the balance of summer edged up 14 cents to $2.31 and the winter increased 13 cents to $2.89, according to Forward Look.

By comparison, both the Nymex winter 2017-2018 strip and the national average were up just 5 cents during that time.