Natural gas forward prices for April were down an average of 12 cents between March 18 and March 24 as swelling storage inventories and forecasts for mostly mild weather pressured markets, NGI Forward Look data shows. 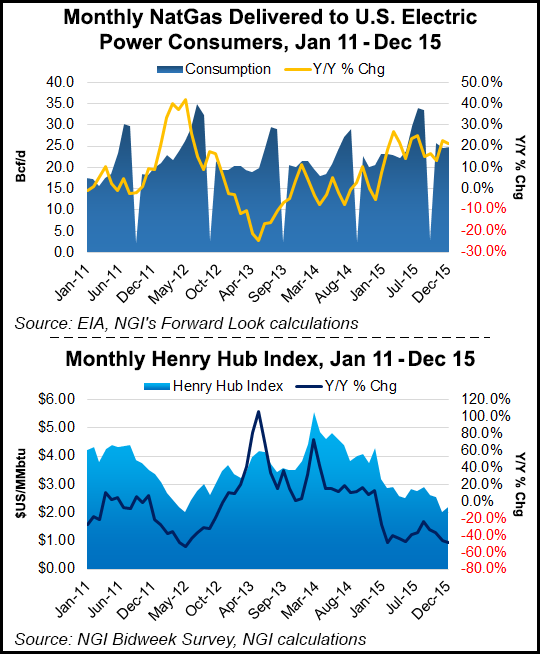 NGI did not publish price data or commentaries March 25 in observance of Good Friday.

The Nymex April contract, which expired March 28, slid 10.2 cents from March 18-24 even as last week’s storage report from the U.S. Energy Information Administration came in slightly below analysts’ expectations.

Forecasters with Bespoke Weather Services said attention indeed will be on EIA data again this week as the report will give the market an indication of how quickly the current oversupply situation can be rectified.

“A large supply overhang continues to cap potential short-term upside for prices as we enter into the spring shoulder season, where major weather-related demand surprises become less likely and the story quickly becomes one of production rates and storage injection sizes,” Bespoke said in a Monday morning note to clients.

Bespoke pegs EIA’s storage report for the week ending March 25 to reflect a withdrawal of 23 Bcf, on par with the five-year average. The agency said tightening closer to the 2012 summer level could lead to a more rapid price recovery.

The latest weather models, however, turned slightly less bullish over the weekend, although a Polar blast expected to hit the northern U.S. on April 1 should boost demand for a few days.

“While the weather data teased early in the weekend it was going to play out colder, it eventually came back around to about what we were expecting, with the polar front stalling near Chicago and eastward across the Ohio Valley, but with only modest cooling further south,” forecasters with NatGasWeather said.

The elevated heating demand may linger into the second week of April, but week three should bring temperatures back to at least average in the East and quite possibly above average across the country’s midsection, Bespoke’s three-week outlook indicates.

Taking a look at natural gas forward curves for the period between March 18 and 24, prompt-month prices were down rather uniformly across the country.

The only exception occurred in the Pacific Northwest, where swings in wind generation have lead to some volatility in natural gas demand during the past few weeks.

The comparative strength comes as natural gas demand for power generation in the Pacific Northwest has ranged widely from 158 MMcf/d to 754 MMcf/d, averaging 431 MMcf/d month-to-date, according to Bentek Energy.

Meanwhile, wind generation within the Bonneville Power Administration has ranged from 5 GWh/d and 92 GWh/d, which equates to utilization of 5-80%, the company said.

Prices further out the Sumas curve moved much closer in line with the Nymex. May dropped 12.2 cents between March 18-24 to reach $1.182, while the balance of summer (June-October) fell 8.9 cents to $1.57, Forward Look data shows.

Nationally, prices were down 11.4 cents for May and 7.9 cents for the balance of summer.

Turning to the much-talked about spring maintenance along the Algonquin Gas Transmission pipeline, work is expected to commence this weekend at the Stony Point compressor station, according to Genscape.

The maintenance taking place from April 2-5, which is expected to reduce throughput flows by nearly 0.2 Bcf/d, is only the beginning of compressor capacity restrictions this summer that will dramatically reduce the throughput on Algonquin’s system, Genscape said.

Operational capacity is currently 1.5 Bcf/d and will get knocked down to 1.2 Bcf/d on April 2. Average flows through Stony Point during the past 14 days have been 1.44 Bcf/d, the company said.

After the opening maintenance work has been completed, Algonquin expects to initiate cleaning tool runs on April 6 and 8.

“The schedule offers a few days without any capacity limitations before moving into more restrictive maintenance work between Stony Point and Oxford compressor stations,” Genscape said.

Operational capacities are expected to fall to 0.91 Bcf/d starting April 13 and continuing through April 29.

Over the past four years, throughput flows at Stony Point have averaged 1.17 Bcf/d, 0.26 Bcf/d above the expected restriction levels, according to Genscape.

During this time, AGT anticipates restrictions to interruptible, secondary services and primary firm services. Since 2009, Genscape has only seen operational capacity at Stony Point dip below 1.2 Bcf/d once for an extended period.

Prices along the Algonquin forward curve appear to reflect that much of the planned maintenance has already been priced in as prices moved very closely in line with the national average.