Natural gas forward prices bounced back this week by an average of more than 10 cents as conditions became oversold thanks to several weeks of double-digit declines across the front of forward curves, according to NGI’s Forward Look. 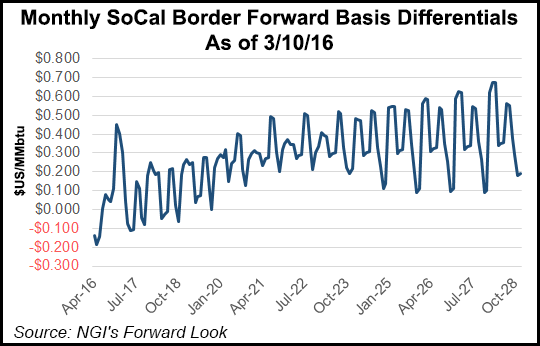 The Nymex jumped 12.2 cents between March 4 and 10 as short-covering and somewhat supportive weather outlooks helped boost the market.

While forecasts overwhelmingly favor mostly mild conditions during the next several weeks, some cooler Canadian air is expected to cross the border around March 19, setting the stage for a few days of at least seasonal demand, according to NatGasWeather.

“But again, in reality, very cold air would need to last to have any meaningful impact, especially when considering supplies are now 911 Bcf higher compared to this time last year,” NatGasWeather said.

After the week’s 57 Bcf storage withdrawal reported by the U.S. Energy Information Administration, inventories now stand at 2,479 Bcf, 58.1% above year-ago levels and 41.5% above the five-year average.

“And with next week likely sporting the first build of the season, when the five-year average is -81 Bcf, this will push year supplies to nearly 1.0 Tcf larger than this time last year with a full injection season to go,” NatGasWeather said.

But market watchers are hoping the cooler temperatures could possibly slow injections at the start of the traditional injection season, which begins April 1.

Taking a look at forward curves, prices in California so far are not reflecting the headwinds facing gas in the region this spring.

Renewables output and power imports are both expected to be substantially higher this March-May than last spring, according to Louisville, KY-based Genscape.

Genscape is a real-time data and intelligence provider for energy and commodity markets.

The company’s California ISO power team anticipates renewables output this spring will be about 16,060 GWh, a 32% increase over last spring’s 10,093 GWh.

In addition, Genscape is calling for power imports from the Pacific Northwest to increase to 7,217 GWh, up from last spring’s 7,191 GWh.

“Collectively, this will account for an increase in non-gas-fired power of just over 5,000 GWh. This roughly translates into about 380 MMcf/d less gas demand than last spring,” Genscape said.

But it’s too early to tell whether market players are pricing in these changing fundamentals.

And Genscape’s power team will be keeping a close eye on hydro output.

Snowpack in California is faltering after starting the winter with a strong start. Data from the California Department of Water Resources shows that at the start of February snowpack across the state was well above normal levels.

Since then, however, a stretch of hot, dry weather significantly degraded the snowpack, Genscape said.

Current snowpack levels are now down to 86% of normal in the Northern Sierra; 82% in the Central Sierra; and 72% in the Southern Sierra.

“In the near term, this rapid decrease in snowpack has been bearish for gas by increasing hydro runoff. (This also coincided with record solar generation in February),” Genscape said. “Longer term, it is somewhat bullish for gas this summer if conditions continue to deteriorate.”

Meanwhile, across the country in the Northeast, markets there found some support further out the forward curve after Constitution Pipeline announced March 10 it will be unable to complete construction by their original December 2016 in-service date (see Shale Daily, March 10).

The project will be delayed a year due to environmental compliance issues.

Constitution is designed to create capacity for 650 MMcf/d of northeast Pennsylvania production north to New York and New England markets via deliveries to the Iroquois Gas Transmission and Tennessee Gas Transmission pipelines.

The project is expected to narrow the spread between Iroquois Z2 and TGP-Z4 Marcellus, which should incentivize northeast Pennsylvania producers to bring back some of their curtailed production in the region, Genscape said.

The project’s delay means consumers in New England and New York will have to wait another full year to receive relief from the threat of high energy prices such as those experienced during the winter heating season.

Indeed, the double-digit gains seen this week in the Northeast are reflective of the type of volatility experienced frequently during the peak winter season.

By comparison, the Nymex was up just 9 cents for that winter package.