Natural gas forwards markets were generally stagnant during the third week of December as traders opted for a wait-and-see approach regarding the latest weather forecasts, which show a winter storm developing on Christmas Eve. 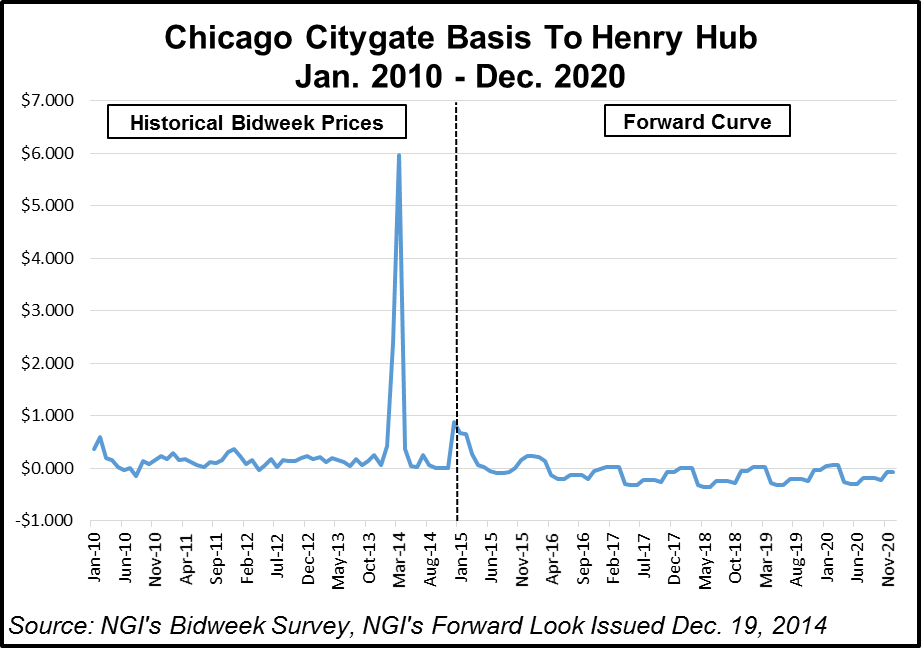 There were a handful of exceptions where forward prices trended higher as the potential for sub-freezing temperatures spurred buying in those high-demand regions.

At the Chicago citygates, January basis jumped 9.7 cents between Monday and Thursday to reach plus 67.5 cents/MMBtu, according to NGI’sForward Look. The February-March package rose 7 cents to plus 45.5 cents/MMBtu.

Michigan Consolidated Gas put up smaller increases, with January climbing 6 cents to plus 47.7 cents/MMBtu and the balance of winter staying nearly flat at 37.4 cents/MMBtu.

Along the Northern Natural Gas Pipeline, Ventura January picked up 9.4 cents to reach plus 71.5 cents/MMBtu, while the balance of winter tacked on 7.2 cents to plus 49.2 cents/MMBtu. NNG’s Demarcation point rose less than 5 cents across the forward curve.

The winter storm system is likely to bring snow to the Upper Midwest, including the cities of Chicago, Detroit and Indianapolis, AccuWeather forecasters said.

While it is too early to say where the heaviest snow will fall, there is the potential for a sudden burst of snow and a quick freeze-up to occur in the swath from Wisconsin and Illinois to Indiana, Ohio, western Pennsylvania, Kentucky and Michigan, according to AccuWeather.

“Impact from adverse weather conditions from the storm will not stop on Christmas Eve,” AccuWeather Senior Meteorologist Dan Kottlowski said.

As the colder air sweeps into the Appalachians from south to north spanning Christmas Eve night through Christmas Day, there is a similar chance of a period of accumulating snow behind the storm. Depending on how much the storm intensifies, gusty winds, with and without snow, will continue and may increase and become very strong over the Midwest on Christmas Day, AccuWeather forecasters said.

Forward basis prices in the Pacific Northwest were also on the rise, despite demand coming in below year-ago levels so far this winter. Northwest Pipeline-Sumas January jumped 11 cents between Monday and Thursday to reach plus 9.8 cents/MMBtu, while the balance of winter managed to slip 1 cent to minus 16.3 cents/MMBtu.

The higher prices have and will likely continue to attract growing supplies from western Canada, which are not expected to ease even with falling oil prices thanks to low breakeven costs in several plays in the region.

At AECO in Alberta, January basis picked up 5.5 cents to hit minus 62.5 cents/MMBtu, while the balance of winter slipped 3.3 cents to minus 65.8 cents/MMBtu.

AECO’s strength can be partly attributed to low storage inventories in the region.

“Inventories entered the summer quite low (as with everywhere else) but were somewhat slow to refill primarily due to strong demand within the province this summer and weak cash-to-winter spreads,” said Genscape’s Rick Margolin. “So far, the latter hasn’t yielded too much volatility in the cash market because production there is up year on year.”

Indeed, AECO cash prices for Dec. 19 delivery are only 4 cents higher than prices on Nov. 1, according to NGI’s historical price data.

Meanwhile, over in the U.S. Northeast, the New England market shed some serious weight this week as market players largely dismissed the Christmas Eve storm.

“Winter has been cancelled. Didn’t you get the memo?” a Northeast trader said.

Algonquin Gas Transmission citygates January basis plunged $1.063 between Monday and Thursday to reach plus $12.385/MMBtu. The January full-value price of $16.03/MMBtu is nearly $10 above Algonquin cash prices for Friday delivery.

“Cash will improve,” the trader said. “Unless the storm sticks around, the [forward] market is in serious trouble.”

While the holiday storm was more intimidating a few days ago, forecasters with NatGasWeather maintain that it will still be a quite a strong eastern U.S. storm, just not as likely to bring heavy snow.

Immediately after, much colder air will begin sweeping through the north-central U.S. with sub-freezing temperatures, which will cover much of the northern half of the U.S. by Dec. 28, forecasters said.

“But there continues to be details that are very important that have yet to be resolved, such as how deep into the southern U.S. sub-freezing temperatures will push, and also how aggressive it will be sweeping into the Northeast,” NatGasWeather forecasters said. “This is a problem when considering the amount of overall national heating demand that will be needed. But more importantly, the latest data continues to show very cold air over the northern U.S. going into the New Year and potentially through the first week of January.”

Meanwhile, some LNG cargoes arrived in New England this week, providing additional supplies to cope with the bump in demand resulting from the storm and helping drive down the front prompt month.

And the slide at Algonquin may not yet be over.

Nymex futures were posting double-digit declines mid-Friday as the latest weather outlooks are showing mostly above-normal temperatures in the U.S. during the next two weeks, and production remains near record levels thanks to the relatively mild start to winter.