Thanks to cheaper natural gas, wholesale power prices for on-peak hours declined year/year at major trading hubs across the United States in 2015, according to a note published Monday by the Energy Information Administration (EIA). 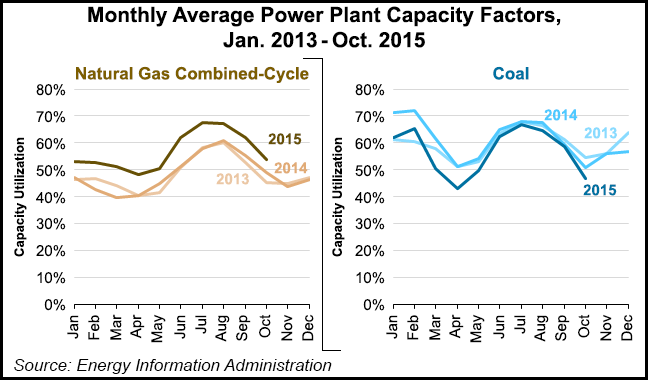 EIA said electricity prices were highest in the Northeast in 2015, same as 2014, while prices were the lowest in the Mid-Columbia and Pacific Northwest regions “where hydroelectric dams are a plentiful and low-cost resource, even though water and snowpack levels in 2015 were low compared to historical averages.”

For the first time ever, natural gas surpassed coal for the largest share of domestic power generation in April of last year, according to EIA’s monthly generation data. Gas subsequently surpassed coal in July, August, September and October, with November and December data not yet available (see Daily GPI, Dec. 28, 2015; Dec. 2, 2015; Oct. 28, 2015).

“For 2015 as a whole, however, coal is still expected to surpass natural gas as the most prevalent fuel used for electricity generation,” EIA said.

Through October, capacity factors for gas combined-cycle plants averaged 57% in 2015, compared to 49% for the January-October periods of 2014 and 2013, EIA said.