Carbon dioxide (CO2) emissions from energy use in the United States last year reached their lowest levels in two decades, in part from a combination of more natural gas use for electric generation, as well as recent mild winters and reduced transportation demand, according to reports published this week by the U.S. Energy Information Administration (EIA) and the U.S. Environmental Protection Agency (EPA). 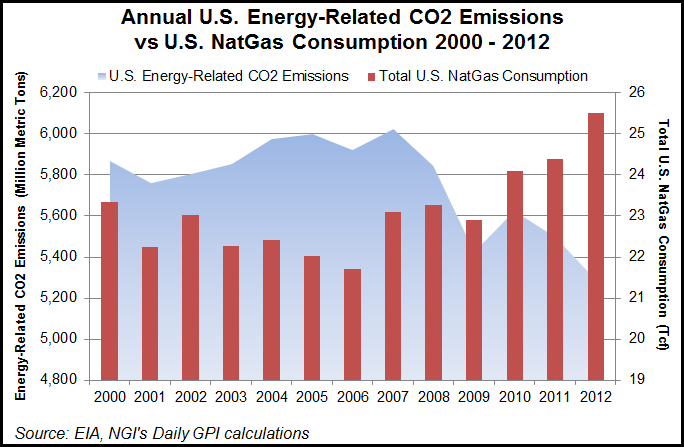 CO2 emissions declined by 10% in the two years preceding 2012 from more than 8,000 industrial facilities, including 1,600 electric generation plants, EPA said in a report Wednesday.

EPA and EIA said the decrease of GHG emissions was principally driven by the large switch by power utilities from coal to natural gas-fired generation.

CO2 levels from energy-related activity declined 3.8% last year, with carbon emissions reaching their lowest levels since 1994 and more than 12% below 2007 peak levels, according to an EIA report published on Monday. Since 1990, only the deep recession year of 2009 saw a larger percentage emissions decrease than 2012.

Energy-related carbon emissions have declined in five of the past seven years, and last year the decline came despite a growing U.S. economy. Although gross domestic product (GDP) grew 2.8% in 2012, energy consumption fell by 2.4%.

Continued low natural gas prices helped drive the emissions decline, with average prices at the $2.66/Mcf level in 2012, a low for the past decade, EIA said.

The upswing in gas use in the power sector helped overcome an overall decline in renewable power generation last year due to a sharp cutback in hydroelectric supplies. An overall increase in wind-generated power supplies was wiped out by a decline in hydro generation supplies that were twice as large as the gains in wind power, the report said.

A mild heating season that dampened energy demand, lower overall residential demand for electricity, and an even bigger decline in the transportation sector were all factors in 2012. “Vehicle miles traveled in 2012 were flat while more energy efficient vehicles continued to enter the market,” EIA said.

The EPA report prompted Sierra Club Executive Director Michael Brune to respond that the nation is “on the right track to ensuring a healthy and safety future for our children.”