A cyclical recovery in legacy shale drilling will be needed to balance the market beginning in 2017, pointing to natural gas prices of $3.00-3.50/MMBtu to stimulate exploration and production (E&P) activity, according to Damien Courvalin, global head of energy research for Goldman Sachs. 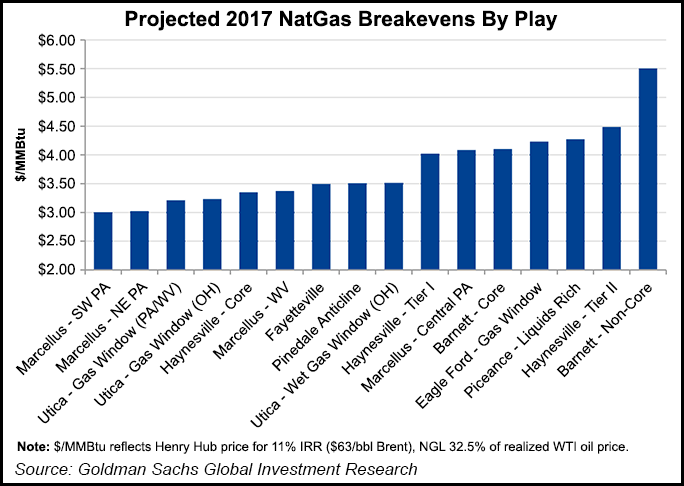 But a subsequent increase in production presents a downside risk to prices in 2018, Courvalin said during a keynote presentation at the 21st Annual LDC Gas Forums Northeast conference, held last week in Boston.

“Ultimately, when you think about our outlook for longer-term, the argument for natural gas prices in the U.S. is that it will likely remain a $2.75-3.00 commodity. There is sufficient production that can grow at those prices to meet demand growth for the foreseeable future,” he said. “And we might have pipeline issues in the short run. In the longer term we do expect the market to be balanced at this price.”

After “modest increases” to prices in 2016, prices could rise as high as $3.50/MMBtu beginning in 1Q2017 to incentivize new production, Courvalin said, pointing to declines in associated gas at the current rig count, combined with pipeline delays that would hold Northeast production growth “well below what we had in 2014 and 2015.”

“We believe that for the first time in four years, we’re going to see a cyclical recovery in drilling in other plays” like the Haynesville Shale, Courvalin said, adding that “recovery should occur as prices near $3.”

But the current leverage in the E&P sector has driven up the cost of capital and fundamentally changed producer economics, he said.

“The funding mechanism for the past few years, it was one where producers were able to fund drilling activity significantly by turning to outside capital, through significant increases in high-yield issuances,” but now producers would have to rely more on equity, Courvalin said.

“And even on the equity issuance side, what we find is that’s mostly targeted, almost exclusively targeted to reducing debt, and that’s important because it means that under this outlook and this funding constraint, natural gas and oil prices are the funding mechanism to create greater drilling activity. Drillers can’t outspend cash flow,” which means “prices will have to do more work.”

In 2016, higher oil prices would put downward pressure on gas prices as an increase in oil-directed rigs brings more associated gas into the market when it’s not needed. But next year, higher oil prices, under current capital constraints, would divert investment away from gas drilling, according to Courvalin.

“At a $60/bbl oil price, producers will target drilling for oil to the detriment of drilling for gas. In the past, that’s not necessarily a constraint. You could do both at the same time through external funding,” he said. “But again, because we view today’s funding market as mostly shut, gas prices will have to keep up with oil prices to be able to incentivize the necessary drilling in 2017.”

If all legacy shale production growth came from the Haynesville, “it would take about 40 rigs to create the necessary supply response and end up with a well-balanced market in 2017,” Courvalin said. But this recovery creates the risk that “the production supply extends well beyond 2017.”

A recovery above $3/MMBtu in 2017 could also lead to “a window of significant hedging” that would “set the stage for a sharp pullback in prices in 2018,” he said.

“For a producer in a range-bound price environment, hedging makes a lot of sense. Yes, you are selling at a potential discount to future production, but it helps limit the passthrough of your commodity price volatility into your earnings volatility” in an environment where a lower cost of capital and higher valuation matter more.

As delayed takeaway capacity planned for the Marcellus and Utica shales goes into service, this further ensures “there is plenty of low-cost production coming online in 2018.”

As for the backlog of drilled but uncompleted (DUC) wells, Courvalin said he estimates about 1,800 wells on the oil side looking at the three largest plays, with prices around $45-50/bbl needed to complete those wells. He said oil DUCs should begin to to come online gradually over the next six months and bring with them about 0.4 Bcf/d of associated gas.

On the gas side, the DUCs are all located in the Northeast, he said.

“The incentive to complete those wells only exists as cash prices in the Northeast recover above $1.75/MMBtu,” Courvalin said. That should start to happen later this year, allowing producers to fill new offtake capacity without an increase in drilling.

Looking at the oil cost curve, Courvalin said his firm “has increased our conviction that oil prices will remain lower for longer” amid “significant growth in low-cost production” out of Saudi Arabia and Russia. As oil prices rise, the United States could see “a self-defeating recovery in drilling activity,” he said.

The recent increase in the rig count “creates concern” about the sustainability of oil prices going forward. “We don’t believe the oil market can accommodate such a sharp reversal in U.S. drilling activity,” Courvalin said.