West Virginia’s severance tax collections for the 2017 fiscal year (FY) that ended last month came in at more than $321 million to finish $58.5 million above estimates for the period and 16% higher than 2016 receipts, which marked a low point not seen in years for the line-item. 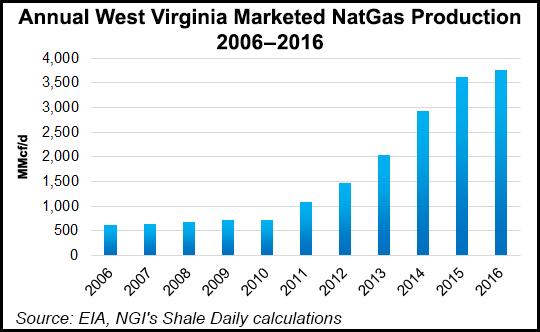 Coal, natural gas and oil severance tax collections were up in June for the fourth month in a row. They were a high point in the state’s overall revenue collections, which came in about $21 million short of estimates and missed the surplus lawmakers had hoped to finish the year with..

“Coal and gas severance taxes are the only real bright spots and have been up in March, April, May and June,” said Gov. Jim Justice’s Chief of Staff Nick Casey. Severance tax collections have beat the state’s estimates since September, accounting for some of the highest gains in the state’s tax base and reflecting an upswing in natural gas prices and coal sales since receipts fell to a low point of $276.4 million in FY 2016.

The gain in FY 2017 severance tax collections, along with one-time revenues, spending cuts and a $40.4 million raid on the rainy day fund helped balance the year’s budget. But while overall revenue collections increased year/year by $63.9 million to about $4.2 billion in FY 2017, the state still faces an $11 million budget shortfall as it begins FY 2018.

Justice, a former coal baron himself, had anticipated that severance taxes for FY 2017 would increase given a rebound in commodity prices. Collections are on the rise after a historic state budget impasse over spending and tax reform came to an end late last month when the governor refused to sign the latest state budget and let it become law without his signature.

West Virginia has long relied on coal and, more recently, natural gas to play an instrumental role in balancing its budget. Producers pay 5% for the value of coal, natural gas and oil. Justice, a Democrat, has argued that the state must find new ways to generate more revenue.