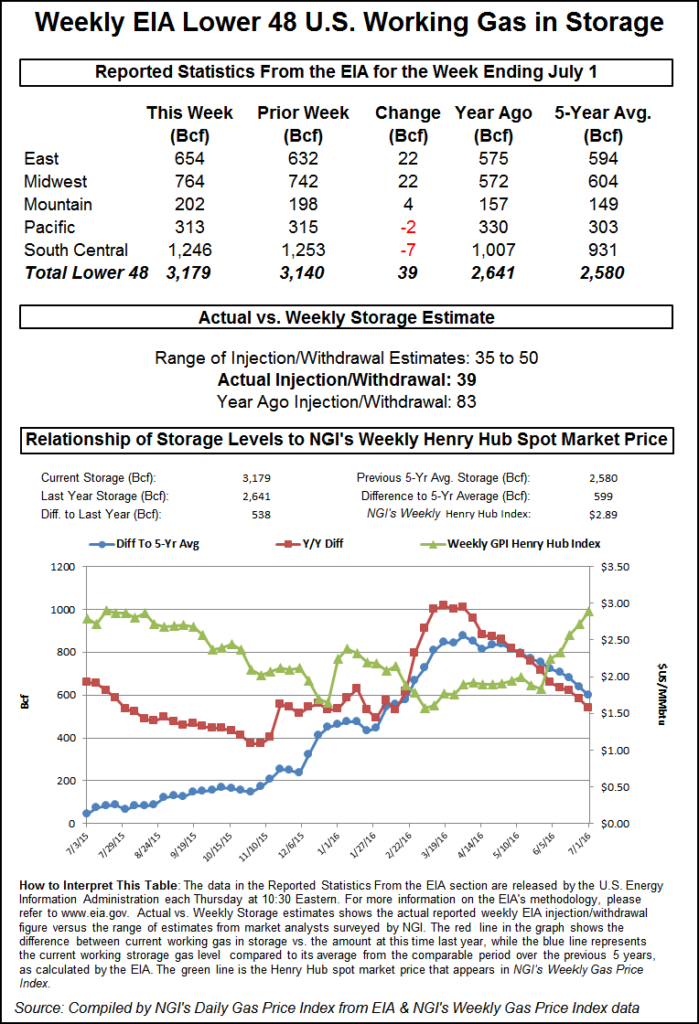 Futures traders were somewhat surprised that the stout 72 Bcf injection reported by the Energy Information Administration (EIA) didn’t have more of a bearish impact than it did. Analysts were expecting a figure about 8 Bcf less. At the close August had fallen 2.4 cents to $2.864 and September had dropped 2.4 cents as well to $2.857. August crude oil tumbled $1.29 to $44.23/bbl.

August futures showed great resilience Friday morning following the EIA storage report for the week ended June 30 that by all accounts was bearish in nature and well above industry estimates.

Prior to the report, traders were looking for a somewhat smaller storage build. Last year 38 Bcf was injected for the week and the five-year average build stood at 66 Bcf. FCStone INTL calculated a 59 Bcf injection and ION Energy estimated a 66 Bcf increase. A Reuters survey of 21 traders and analysts showed an average build of 64 Bcf with an injection range of 57 Bcf to 68 Bcf.

Traders see a weaker supply demand balance, but also suggest a correction from the prior week’s less than expected build.

“The 72 Bcf in net injections for last week was somewhat more than the consensus expectation for a 64-66 Bcf build, and marginally above the 66-Bcf five-year average for the date,” said Tim Evans of Citi Futures Perspective. “This implies a somewhat weaker background supply/demand balance or at least a correction after the smaller-than-expected 46 bcf refill in the prior week.”

“The market did trade down off the number but bounced back,” said a New York floor trader. “How much lower do we think the market can go at this point?”

Inventories now stand at 2,888 Bcf and are 285 Bcf less than last year and 187 Bcf greater than the five-year average. In the East Region 28 Bcf was injected, and the Midwest Region saw inventories rise by 23 Bcf. Stocks in the Mountain Region were greater by 3 Bcf and the Pacific Region was up 7 Bcf. The South Central Region increased 11 Bcf.

Weekend and Monday packages for delivery to the PG&E Citygate were unchanged at $3.16, but deliveries to SoCal Citygate gave up 37 cents to $3.22. Gas priced at the SoCal Border Average changed hands 37 cents lower at $2.85 and Kern Delivery was quoted at $2.88, down 39 cents.

Other market points were mixed. Gas at the Algonquin Citygate rose 11 cents to $2.29 and deliveries to Dominion South added a penny to $1.99. Packages bound for New York City on Transco Zone 6 were down a cent to $2.18.

Overnight weather models turned ever so slightly warmer. “Changes to the six- to 10-day period forecast are mixed,” said WSI Corp. in its morning report to clients. “There are warmer changes across the South and portions of the Mid Con, but the Northeast, Texas and West are generally cooler.” Continental United States population-weighted cooling degree days “are up 1.1 to 64 for the period, which are 8.4 above normal.

“The case can be made for risks in either direction given the inconsistency and divergent solutions with the operational model runs.”

The plump storage build may ultimately prove to be too much for the market to handle. All eyes were on the 10:30 a.m. EDT release of storage data delayed a day by the holiday, and “industry ideas were favoring an injection of around 64 Bcf that would imply a slight decline of about 2 Bcf in the supply surplus against five year average levels. We feel that a 50 handle increase will be needed in order to sustain today’s early rally. We also believe that further contraction in the supply overhang will be seen in next week’s EIA report given this week’s warmer than normal temperatures.

“But unless this weekend brings some significant bullish adjustments to the weather views that will be extending into the fourth week of this month, further advances will likely prove limited for a few more days. But we have shifted our stance from neutral to bullish as we suggested purchases of nearby futures earlier this week on pullbacks into the $2.87-2.92 zone. This change in stance was predicated largely on the ongoing narrowing in the supply overhang and our perception that the sharp price plunge seen earlier this week was simply overcooked with our technical indicators swinging into oversold territory.”