Next-day natural gas prices on Tuesday took a breather from Monday’s meteoric gains and slipped lower as weather forecasts became more uncertain and offered little in the way of added near-term cold. Traders were also preparing for a fresh helping of storage data before Thanksgiving Day as the Energy Information Administration (EIA) is set to release its report Wednesday at 12 p.m. Eastern. 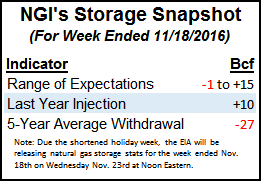 Some pockets of strength were noted in New England as power prices firmed, but theNGI National Spot Gas Average fell 4 cents to $2.71. Futures prices advanced for a third consecutive session and at the close December was higher by 3.2 cents to $2.982, and January had risen 2.3 cents to $3.100. January crude oil slipped 21 cents to $48.03/bbl.

Firm power prices in the New England helped lift quotes, but for the most part temperatures were expected to hover around seasonal norms. Intercontinental Exchange reported on peak power for Wednesday delivery to the ISO New England’s Massachusetts Hub added $2.34 to $36.83/MWh.

The National Weather Service (NWS) forecast the week’s heating load slightly less than normal. For the week ending Saturday (Nov. 26), NWS is forecasting New England will see 182 heating degree days (HDD), or five less than normal. The Mid-Atlantic was expected to endure 168 HDD, also five below normal, and the greater Midwest from Ohio to Wisconsin was anticipated to see 180 HDD, or 17 under its seasonal tally.

Weather models overnight Monday were mixed, calling for both warming and cooling.

“Some slightly colder short-range changes for the Midwest to East helped to partially offset some warmer changes for the six-10 day in these same areas this morning,” said Commodity Weather Group President Matt Rogers in the Tuesday morning report.

“The models are struggling somewhat with a very active storm track over the next two weeks. Some of these storm systems could bring up some sizable warming out ahead of them, but the negative North Atlantic Oscillation could also suppress the track, offering cooler-to-colder risks, too.

“The other debate point is the future of the Western cold outbreak in the 11-15 day. The American and Canadian are more aggressive in spilling this cold out into the Midcontinent and toward Texas, while the European holds it back longer into the Western U.S.,” Rogers said.

Most of the price advance Monday “appeared driven by some colder adjustments within the short-term temperature views during the past weekend,” said Jim Ritterbusch of Ritterbusch and Associates. “Furthermore, nearby futures hitched a ride on the tails of a stronger physical market that is developing off of a current Midcontinent cold spell.”

However, despite Monday’s “upside breakout to three-week highs, tacking on additional gains could prove arduous in the absence of some below-normal temperature expectations across the upper Midwest.”

The storage report for the week ending Nov. 18, to be issued a day early on Wednesday by the EIA for the Thanksgiving Day holiday, “will likely see a new record,” Ritterbusch said. “We are expecting an injection of about 7 Bcf that would imply a further stretch in the surplus against five-year averages of about 35 Bcf.

“Given this supply cushion amidst some shifts in longer-term forecasts away from a cold winter, additional price gains could prove limited,” he added. “Nonetheless, our technical indicators suggest upside possibilities to as high as $3.20 basis January futures where we may look to approach the short side for a trading turn depending upon weather updates.”

Wednesday’s noon EST release of storage figures is expected to show the last build of the season. Last year 10 Bcf was injected but the five-year average shows a 27 Bcf pull. IAF Advisors calculated a 6 Bcf build. A Reuters survey of 19 traders and analysts showed a build of 5 Bcf average with a range spanning from a 1 Bcf withdrawal to a 15 Bcf addition.