Physical natural gas for Friday delivery slumped as modest strength in the East and California was unable to offset losses in Texas, Louisiana, market centers in the Midwest and the Midcontinent. 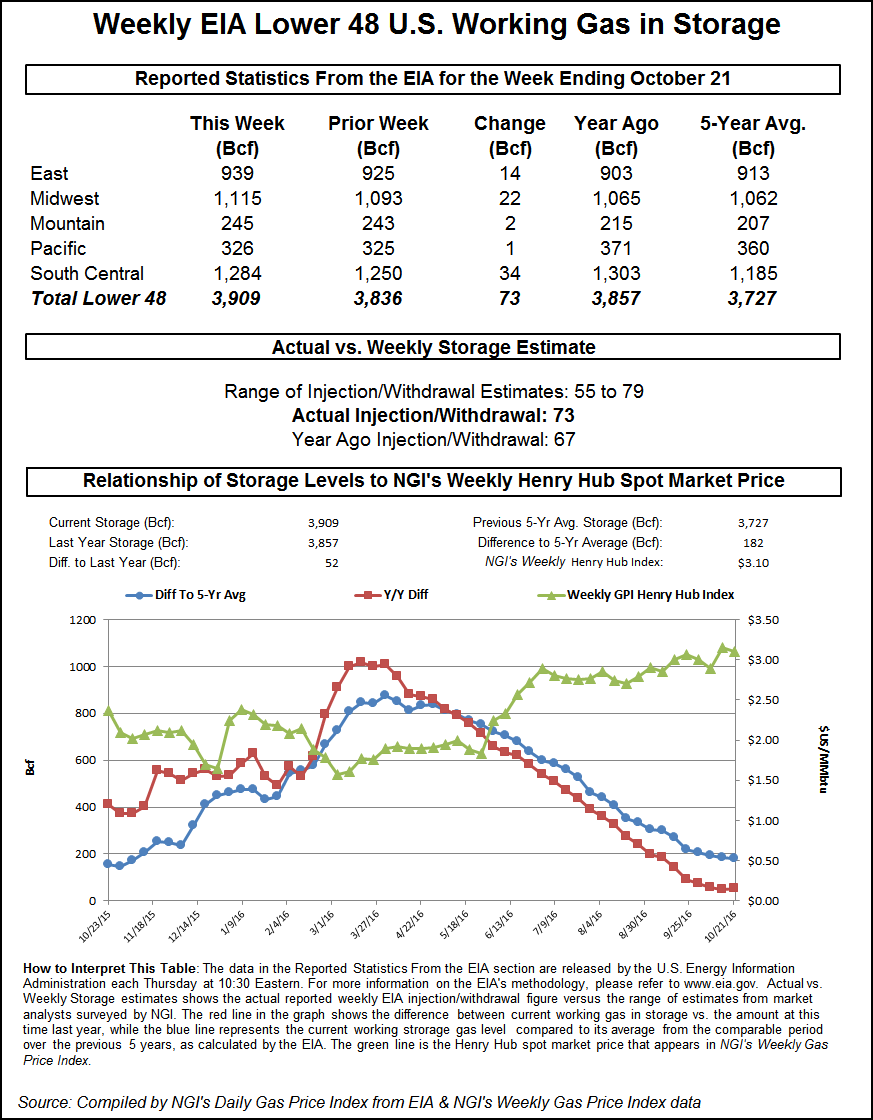 The NGI National Spot Gas Average fell 4 cents to $2.47. The Energy Information Administration (EIA) reported a storage injection of 73 Bcf, and futures prices stabilized. At the close the expired November contract went off of the board at $2.764, up 3.3 cents, and December added 3.2 cents to $3.068. December crude oil gained 54 cents to $49.72/bbl.

Futures bulls were able to breathe a small sigh of relief as prices steadied following the release of EIA storage figures that the industry had already largely factored in. The EIA reported a 73 Bcf storage injection for the week ending Oct. 21 in its 10:30 a.m. EDT release, and as soon as the numbers flashed across trading screens, the expiring November futures contract reached a low of $2.725, but by 10:45 a.m. November was trading at $2.740, up nine-tenths of a cent from Wednesday’s settlement.

Traders noted that natural gas from the December contract onward is still a $3 market despite the price implosion of the last 6 days. “You have got $3 all the way back to March 2018, so you are in good shape in regards to $3,” said a New York floor trader.

“The 73 Bcf in net injections for last week matched the major newswire surveys and was more than the 68 Bcf date-adjusted build from a year ago,” said Tim Evans of Citi Futures Perspective. “It was still just below the 77 Bcf five-year average, although close enough to be considered neutral rather than bullish. Overall, we don’t see today’s data changing anyone’s view.”

Inventories now stand at 3,909 Bcf and are 52 Bcf greater than last year and 182 Bcf more than the five-year average. In the East Region 14 Bcf was injected and the Midwest Region saw inventories increase by 22 Bcf. Stocks in the Mountain Region rose 2 Bcf, and the Pacific Region was up 1 Bcf. The South Central Region added 34 Bcf.

Traders who correctly guessed the decline are now trying to figure out the market’s next move. “I was looking for a move into the $2.90 area [December] and Wednesday it got that,” said Alan Harry, director of trading at McNamara Options in New York.

“I think the low part of the range is $2.91 to $3.01, but the market hit it yesterday and it spent no time there. I am looking for a pullback into that range and I don’t think we go much lower than $2.90 for now. From there we will have some concerns on what we do with the winter.

“We may also break a record as to how much storage we have in natural gas, so that doesn’t help prices, but the move up was all on speculation, and when it came time for the contract to settle, prices collapsed. [Speculators rarely take physical delivery].

“I still think we have another move up here on the back of some weather patterns a couple of weeks down the road. For now I think we are looking at sideways market movement. The range is $2.90 to $3.30 and a break above $3.30 would be a buy signal.”

Weather forecasters see no major changes but leave open the possibility of a cooler thrust into the Northeast later in the forecast period. “No significant changes are noted over the next ten days although the Midwest to South are slightly warmer again, while the East Coast is a bit cooler,” said Commodity Weather Group in its Thursday morning outlook.

“Another high pressure area moving across the northern tier next week could usher in another cool wedge of air for the East Coast cities by later in the six-10 day. The American models are more aggressive with the European on the concept, but both sets of models edged cooler over the past 24 hours,” said Matt Rogers, president of the firm.

In physical market activity prices affected by an NGPL force majeure may uptick as NGPL has issued a force majeure to conduct pipe remediation work on the Amarillo No. 3 mainline in Kansas, industry consultant Genscape reported. “NGPL states the work will run Thursday through Friday and restrict northbound flows out its Midcontinent Zone by restricting primary firm and secondary in-path firm transport to 73% of MDQ at compressor 193 in Edwards County in southwest Kansas (just north of the junction of Segments 4 and 10). All points south of Station 193 will thus be affected.”

Eastern points were firm. Gas at Texas Eastern M-3, Delivery was unchanged at $1.31, and deliveries to New York City via Transco Zone 6 gained 16 cents to $1.73.

Major market centers were mostly lower. Gas at the Chicago Citygate fell 9 cents to $2.73, and deliveries to the Henry Hub changed hands a penny higher at $2.69. Parcels at Opal were seen down 5 cents at $2.56 and gas at the SoCal Citygate was up a penny to $2.85.

With the natural gas market still waiting for more impressive cooling demand to show up in forecasts, futures probed lower in early trading Tuesday. The June Nymex contract was down 3.7 cents to $2.895/MMBtu at around 8:50 a.m. ET. Technical support around $2.900 held for the June contract in Monday’s trading, but this support level…