For the week ending August 15, physical natural gas prices generally eased a few pennies, which came as a sharp contrast to the previous week when double digit gains were largely the rule. The NGI Weekly National Spot Gas Average dropped 3 cents to $3.66. 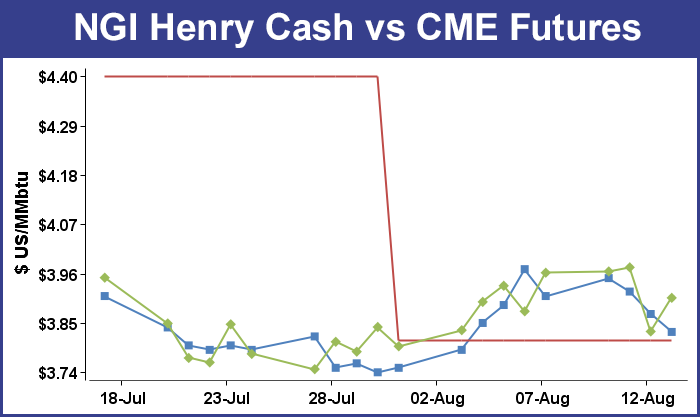 The Midcontinent and the Rocky Mountains mirrored the national decline by both losing 3 cents to average $3.79, and California and South Louisiana both eased 2 cents to $4.25 and $3.85, respectively.

For the week, September futures fell 18.6 cents to $3.776, but futures bulls were delighted with a favorable Energy Information Administration inventory report Thursday for the week ending Aug. 8 that came in at 78 Bcf, or about 6 Bcf under trader expectations.

Going into the report traders expected to see another stout reduction in the storage deficit relative to both last year and the five-year averages. Current thinking was in the neighborhood of 84 Bcf, but as previous Thursday’s have shown, a difference of just a few Bcf from expectations can mean sizeable price moves. Last year, 70 Bcf was injected, and the five-year average for the week was a 45 Bcf increase.

Thursday was no exception. September futures surged to a high of $3.947 soon after the number was released and by 10:45 EDT September was holding $3.914, up 8.3 cents from Wednesday’s settlement. IAF Advisors of Houston calculated a build of 85 Bcf, and United ICAP came up with an 83 Bcf injection. A Reuters survey of 24 traders and analysts revealed an average of 83 Bcf with a range of 75-91 Bcf.

Looking forward, Bentek comes in on the high side of estimates for season-ending inventory builds. “Even with the high power demand relative to recent summer levels, the storage injection marks a strong build compared to historic averages and brings inventories near the 2.4 Tcf mark to start August, which keeps the projected end-of-season inventory mark on track to reach above 3.5 Tcf, and a continuation of mild weather in August from July could push inventories closer to 3.6 Tcf by the end of the refill season,” it said.

“This second miss on the bullish side of expectations does suggest that the background supply/demand balance may have firmed slightly, which may carry over into somewhat smaller refills going forward, although still likely to exceed five-year average rates,” said Tim Evans of Citi Futures Perspective.

Phillip Golden, director of Risk and Product Management at EMEX, said the storage report was “moderately bullish” versus market expectations of 83-84 Bcf. “As expected, the market has moved up in initial response to the news, erasing a little more than half of yesterday’s significant ($0.14 for Sept. 14) decline,” he said. “While this is the largest build for Week 19, the recent fall off in injection numbers and misses to the low side are likely to start supporting the market.” As a result, EMEX believes “there is a good buying window over the next couple of months.”

Inventories now stand at 2,467 Bcf and are 530 Bcf less than last year and 575 Bcf below the 5-year average. In the East Region 58 Bcf were injected and the West Region saw inventories up by 11 Bcf. Inventories in the Producing Region rose by 9 Bcf.

Futures traders Friday noted that much of the day’s “selling appeared to reflect further shifts in the short term temperature views suggestive of much cooler trends across most of the US than had been projected yesterday and earlier this week,” said Jim Ritterbusch in closing comments to clients. “As a result, the rest of August has essentially been written off as another month of much below normal temps that will continue to drive larger than normal supply builds.”

“Next week’s injection should again prove upsized from normal with this dynamic of “deficit contraction in large chunks” continuing to restrict occasional price rallies as seen earlier this month. All of the bullish momentum established via the steady early August price advance of about 1 Â½ weeks was erased in yesterday’s session keeping this market vulnerable to additional slippage. We will also further note that this week’s cool patterns have weighed on Henry Hub pricing with early indications as low as $3.78 but with end of day guidance likely to be significantly lower.. Overall, we still look for support to hold at around last month’s lows of $3.72-3.74, an area that could provide a base for a rebound back toward $4.00.”

In Friday’s trading physical gas for delivery Saturday through Monday fell, seemingly synchronized with double-digit losses on the screen, and marked three consecutive days of lower quotes overall, according to NGI data.

Not one market point registered a gain. Hardest hit was the Northeast, with double-digit losses, but the Mid-Atlantic was right behind with hefty setbacks of its own. The greatest losses were seen in market zones, and producing zones were generally off by about a nickel. Overall, the market lost 9 cents.

Near-term weather trends struggled just to make seasonal norms. Forecaster Wunderground.com said Friday’s high in New York of 73 degrees would rise to 82 Saturday before inching up to 83 Monday, the seasonal high. In Philadelphia, Friday’s 81 maximum was forecast to make it to 83 Saturday and 84 by Monday. The normal mid-August high in Philadelphia is 83. Washington, DC, was anticipated to see its Friday high of 80 jump to 86 Saturday and climb to 88 Monday, just one degree above its seasonal norm.

The National Weather Service forecast that low temperatures near term in the Washington, DC, area could drop as low as the 40s as a cool front passes, but “high pressure will build overhead through tonight [Friday] before moving off the coast later Saturday and Sunday. Low pressure will pass through the area Monday into Tuesday, and the cold front associated with the low will stall out near the area during the middle portion of next week.”

Points in New England took the biggest hits. Weekend and Monday deliveries at the Algonquin Citygates fell 28 cents to $2.24, and on Iroquois Waddington packages were seen 76 cents lower at $2.66. Gas on Millennium shed 11 cents to $1.96.

Marcellus points continued to weaken as well. Gas on Transco Leidy fell 14 cents to $1.80, and deliveries to Tennessee Zone 4 Marcellus dropped 20 cents to $1.65.

Weaker quotes may come to an end shortly as a leading industry consultant suggested heat next week could increase power burn.

In a report Genscape said, “Power burn is poised to increase next week after having languished for most of this summer. Hotter weather is expected to stretch coast-to-coast. NOAA’s 6-10 outlook is forecasting a strong probability of above-normal temperatures across the East, Texas, Desert Southwest and West Coast.”

As a result of the cool temps, Genscape’s “NatGas for Power Burn Estimate” model (which is an aggregate of pipeline nominations, no-notice data, and Genscape’s proprietary plant and transmission data) shows total U.S. summer-to-date power burn averaging 23.16 Bcf/d, 2.07 Bcf/d less than the prior three-year average. The largest drop-off is occurring in the Producing Region, where power burn this summer is averaging 7.38 Bcf/d, a 1.7 Bcf/d decline from the three-year average and 1.24 Bcf/d below the prior five-year average. The West is bucking the overall trend, however. Temperatures there are averaging 69 degrees, two degrees above normal. This has caused power burn to average 4.57 Bcf/d, 0.43 Bcf/d greater than the three-year average and 0.56 Bcf/d above the five-year average.”

Consistent with the Genscape outlook, the New England ISO forecasts maximum power load will increase during the week from Monday’s 17,580 MW to 18,100 MW by Friday.

Warmer temperatures are up for debate, however. WeatherBELL Analytics in its Friday morning 20-day Energy Outlook said to look for warmer temperatures, “but not hot in the Midwest and Northeast for week two,” said meteorologist Joe Bastardi. “Where it’s dry, you can fry. Texas is where heat hits and holds over the next 10 days, [and] a new pool of cool reforms from northern Rockies into northern Plains, then spreads southward and eastward.” He added that the SOI (Southern Oscillation Index) was “coupling” for ENSO (EL Nino Southern Oscillation).

“My confidence is high this morning as the trough that pushes through days four through seven (in back of the current major trough) does its dirty work with rains through the Midwest and Northeast, chopping apart the latest heat wave rumor. The precipitation chart shows the lack of rain in Texas, where it will fry, but farther north it’s wet.”

WeatherBELL forecasts only a nominal increase in cooling requirements over historical averages. It predicts for the next two weeks an accumulation nationally of 159.7 CDD (cooling degree days), below last years 164.6 CDD but just a touch above the 30-year average of 155.9 CDD.