Natural gas for Friday delivery inched higher in Thursday’s trading as most traders scurried to get deals done before the release of Energy Information Administration (EIA) storage data. 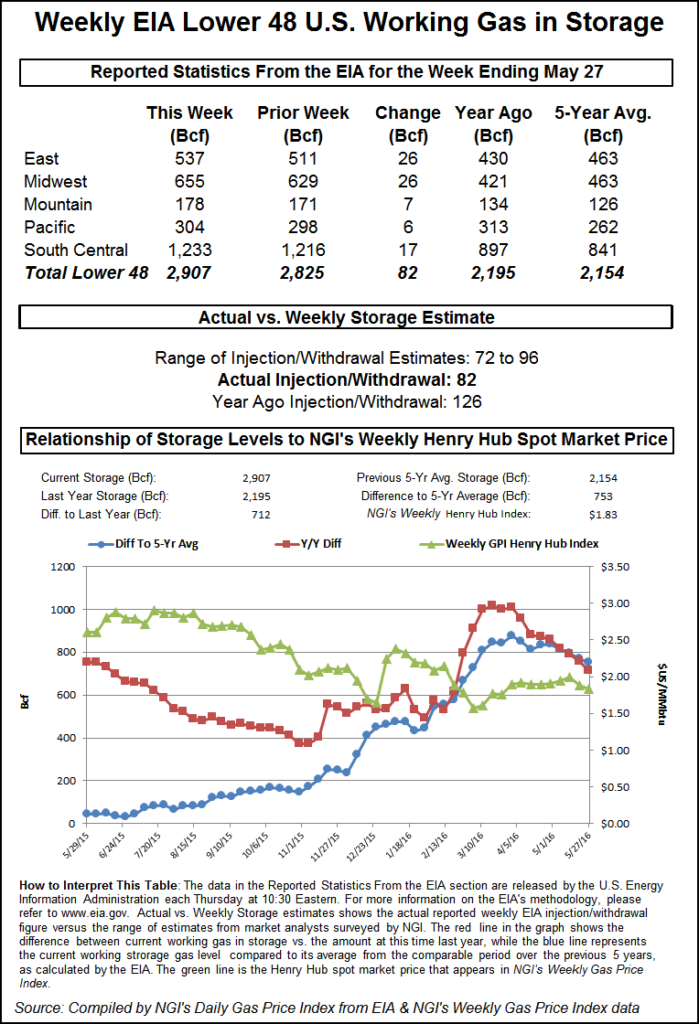 A few points posted losses of a penny or two, but they were outdistanced by the majority of market locations making advances of a penny or two. The NGI National Spot Gas Average rose 3 cents to $2.12. EIA reported a storage build of 82 Bcf, about 3 Bcf shy of market expectations and at first prices sagged.

Analysts see the current levels in July futures as consistent with a seasonal advance and hint that prices, futures at least, may not have much room to move higher.

“$2.42 to $2.49, be careful up here,” said Walter Zimmermann, vice president of United ICAP. “We’ve just had an average seasonal winter to spring rally. We may get more than average, but we got more than what most people considered wildly impossible.

“At this point it’s like, ”is that it?’ Or do the shorts really, really get crushed? That would be the next [price] leg higher and would be a disaster for these shorts. The other argument for going a little bit higher is that the higher you go, the more likely you are to sell off into late August, early October.

“The holiday guide to trading natural gas is sell Thanksgiving, buy Martin Luther King Day, sell Mother’s Day, buy Labor Day and then sell Thanksgiving again. We are into that window of sell Mother’s Day, buy Labor Day. The higher the pre-season rally carries the more likely those highs are to discount the bullish case for summer demand and to set you up for a decline into the end of the summer.

“The issue is have we flushed out enough shorts to give us a spring to summer decline?” he said.

The addition of 71 Bcf into storage may have signaled the end of sub-par injections. Last week EIA reported 71 Bcf was injected, well below the five-year pace of 97 Bcf. This week looked different. Last year at this time, a stout 126 Bcf was added, and the five-year average currently stands at 98 Bcf.

Tim Evans of Citi Futures Perspective was on the high side of estimates with 96 Bcf, and he expects the year-on-five year surplus to drop from its current 769 Bcf to 732 Bcf by June 17. “[T]his fundamental price trend tends to limit the downside for prices and often translates into higher prices over the intermediate term, just as the higher lows registered last week and Tuesday’s price rally tend to confirm.”

In physical market trading little change in the weather outlook didn’t give traders a lot to hold on to, and prices at market hubs held to narrow ranges. Gas at the PG&E Citygate rose 2 cents to $2.42, and deliveries to Dominion South added a dime to $1.65. Gas at the Chicago Citygate fell a nickel to $2.19 and parcels at the Henry Hub added 4 cents to $2.30.

Weather forecasts changed only nominally. Commodity Weather Group in its Thursday morning report said, “The main change [Thursday] morning compared to yesterday morning seems to be a slower advance of cooler weather into the East next week that adds some warmth to the front the six-10 day and end of the one to five day.

“We also see slightly warmer South and West changes, including hotter heat for Portland this weekend (now touching 100 F). The combination of warmer one to five and six-10 day changes nationally add enough demand to offset some cooler shifting in the 11-15 day for the Midwest and then East. The models seem to only temporarily highlight some stronger southern warmth attempts before beginning to shift the heat ridge focus back toward the Southwest more.”

Although forecasts call for warm temperatures to start in the West, Midwest and eastern markets are expected to see above-normal cooling requirements near term. For the week ended June 4 the National Weather Service predicts that New England will see 13 cooling degree days (CDD), or 8 above normal, and the Mid-Atlantic states of Pennsylvania, New York and New Jersey will have 23 CDDs, or 10 more than average. The greater Midwest from Ohio to Wisconsin is expected to see 36 CDDs, or 14 more than the norm.