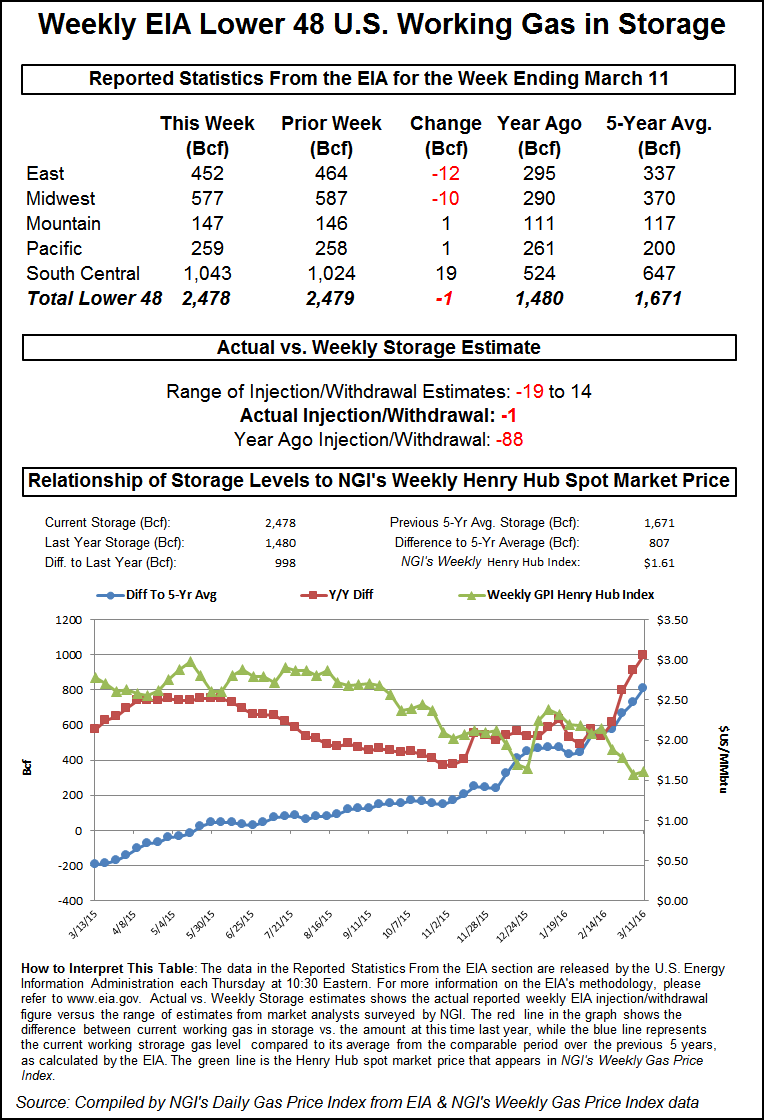 Physical prices managed to gain about 2 cents more than spot futures. Only one location followed by NGI traded in the loss column, and most points added between a nickel and a dime. The NGI National Spot Gas Average gained 10 cents to $1.71, propelled in large part by average gains of about 25 cents at eastern points.

The Energy Information Administration (EIA) reported a withdrawal of 1 Bcf, slightly less than what traders were expecting, and initially futures prices slipped. At the close, however, April had managed to add 6.8 cents to $1.936 and May had gained 5.6 cents to $2.011. April crude oil vaulted $1.74 to $40.20/bbl.

“There will be new buying coming in April due to storage injections, and if you are a hedger and buying for April as well as the rest of the summer, that’s going to push the market up a bit,” said Tom Saal, vice president at FCStone Latin America LLC.

“Speculators may be buying in anticipation of that. It’s a regular old-fashioned up day, but what is significant is that it came on the heels of a bearish storage report. I think all the bearish storage factors are built into the market. That’s why you are seeing some of the lowest prices in the last 10 years.”

The release of storage data wasn’t much of a surprise. EIA reported a 1 Bcf withdrawal in its 10:30 a.m. EDT release, about with traders were expecting. The market dropped to a low of $1.855 following the release of the data. and by 10:45 a.m. April was trading at $1.857, down 1.1 cents from Wednesday’s settlement.

Last year 88 Bcf was pulled from storage and the five-year average was an 81 Bcf withdrawal. Analysts at ICAP Energy predicted a 0 Bcf withdrawal, and IAF Advisors calculated a 3 Bcf decline. A Reuters survey of 23 traders and analysts revealed an average 2 Bcf withdrawal with a range running from a 19 Bcf draw to a 14 Bcf injection.

“The 1 Bcf net withdrawal was slightly less than the consensus expectation and so modestly bearish in terms of its immediate pressure on prices,” said Tim Evans of Citi Futures Perspective. “We see it as significantly more bearish versus the 82-Bcf five-year average, with the year-on-five-year average storage surplus a new high of 807 Bcf.”

Drew Wozniak of ICAP Energy characterized the report as “bearish.”

Inventories now stand at 2,478 Bcf and are a stout 998 Bcf greater than last year and 807 Bcf more than the five-year average. In the East Region 12 Bcf was pulled, and the Midwest Region saw inventories fall by 10 Bcf. Stocks in the Mountain Region rose 1 Bcf, and the Pacific Region was higher by 1 Bcf. The South Central Region added 19 Bcf.

If forecasters are correct, next week’s reported storage figures may stay in withdrawal mode as well. In a Thursday noon report Natgasweather.com said more seasonal temperatures are on the way. “The very mild spell across the central, southern and eastern U.S. is in the process of coming to an end as a weather system over the Great Lakes taps into a bit colder Canadian air and spreads it south and east the next few days.

“This will finally drop overnight lows back below freezing for several nights across the northern and central U.S. late this week into the weekend to bring a modest increase in natgas demand. Cooling is also expected to push deep into Texas and the South for a couple days to drop highs out of the 70s to 90s and into the 50s to 70s. The associated cold front will finally push through the Mid-Atlantic and East Coast Friday to bring a return to seasonal temperatures with highs mainly in the 40s and 50s, locally 30s.

“A break between weather systems over the northern and eastern U.S. is expected mid next week before additional weather systems arrive with areas of rain and snow, but continuing to look seasonal in nature as they fail to tap adequately into the frigid cold pool over central Canada.”