Most natural gas traders laid low Thursday and got their deals done ahead of the release of often volatility-inducing inventory figures from the Energy Information Administration (EIA). It was a mixed market with gains in the Northeast and Appalachia unable to offset broader losses in the Midwest, Midcontinent, Rockies, and California. 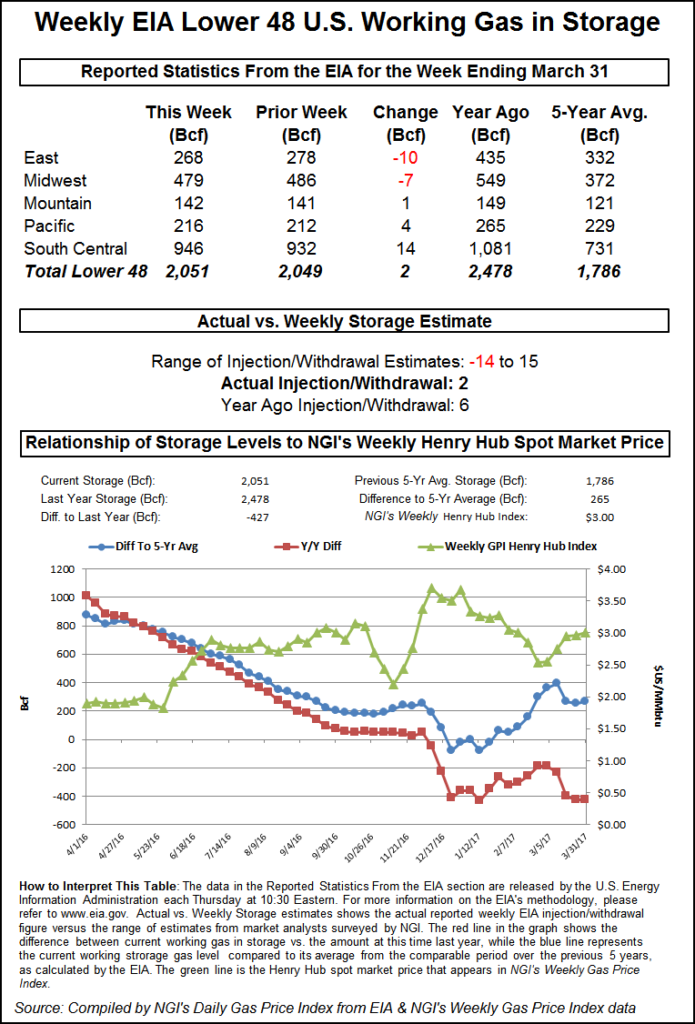 In physical trading traders working Iroquois and Algonquin pipelines should be kept busy as work commences on an Iroquois compressor station. “During Iroquois’ annual Brookfield Compressor inspection on March 27, some mechanical damage was discovered and requires a prolonged outage to perform repairs,” said industry consultant Genscape in a morning report. “Beginning on April 6, Iroquois receipts from Algonquin at Brookfield will be capped at 195 MMcf/d, affecting primary firm, secondary, and IT transportation.

“Since the outage on the 27th, receipts have averaged 263 MMcf/d with a single day maximum of 371 MMcf/d. Iroquois has plenty of available capacity to compensate for the restriction at its southernmost compressor by bringing more TransCanada gas south. However, an increase in southbound flow, coupled with a restriction in Algonquin export capacity, could put downward pressure on Algonquin Citygate prices.

“This trend was observed during the 2016 annual Brookfield Compressor maintenance, when the spread jumped to $0.63 in favor of Waddington. A swap of this magnitude is fairly rare, and has only been observed 12 of the last 304 days. Two of which were during the 2016 outage,” Genscape said.

Eastern market points firmed, while points west weakened. Gas on Dominion South changed hands 4 cents higher at $3.04 but deliveries to the Chicago Citygate sank 12 cents to $3.12. Parcels at the Henry Hub came in 2 cents higher at $3.23.

Futures jumped Thursday morning after the EIA reported a storage injection that was less than what traders were expecting.

Prior to the release of the data, Wells Fargo Securities LLC was looking for an injection of 13 Bcf. A Reuters survey of 22 traders and analysts showed an average 7 Bcf increase with a range of -14 Bcf to +15 Bcf.

Last year 6 Bcf was injected, and the five-year pace stands at a 12 Bcf decline.

“If the market stays above $3.31, I think they will take out $3.35. Right now the market feels supportive,” said a New York floor trader.

Others didn’t see the number as that helpful. “We believe the storage report will be viewed as neutral,” said Randy Ollenberger, an analyst with BMO Capital Markets. “Storage is trending below last year’s levels; however, rising associated gas production should keep U.S. storage levels at or above five-year averages, assuming normal weather.”

“The 2 Bcf net injection into U.S. natural gas storage for the week ended March 31 was smaller than expected and so supportive in the near term, even as the build was still bearish relative to the 13 Bcf five-year average draw,” said Tim Evans of Citi Futures Perspective. “The surprise implies a somewhat tighter supply/demand balance, which may carry over into future periods.”

Inventories now stand at 2,051 Bcf and are 427 Bcf less than last year and 265 Bcf greater than the five-year average.

In the East Region 10 Bcf was withdrawn and the Midwest Region saw inventories decrease by 7 Bcf. Stocks in the Mountain Region were up 1 Bcf and the Pacific Region was up 4 Bcf. The South Central Region increased 14 Bcf.

Overnight weather data turned warmer. “Forecast changes were in the warmer direction [Thursday] in this period and focused in the Central U.S.,” said MDA Weather Services in its morning six- to 10-day forecast. “This region is now expected to see aboves returning with greater intensity in the latter half, out ahead of the next round of low pressure out of the Rockies at that time.

“The East Coast, likewise, favors above normal temperatures in this period, with the warmest conditions a result of westerly flow ahead of low pressure early on. At that time, temperatures peaking into the upper 70s are expected as far north as New York City. The passage of low pressure will return normal readings to the East for the second half.”