Physical gas for delivery Wednesday rose modestly in Tuesday’s trading as strong performances in the Midwest, Texas and Gulf Coast overshadowed weaker pricing in the Rockies, California and East. 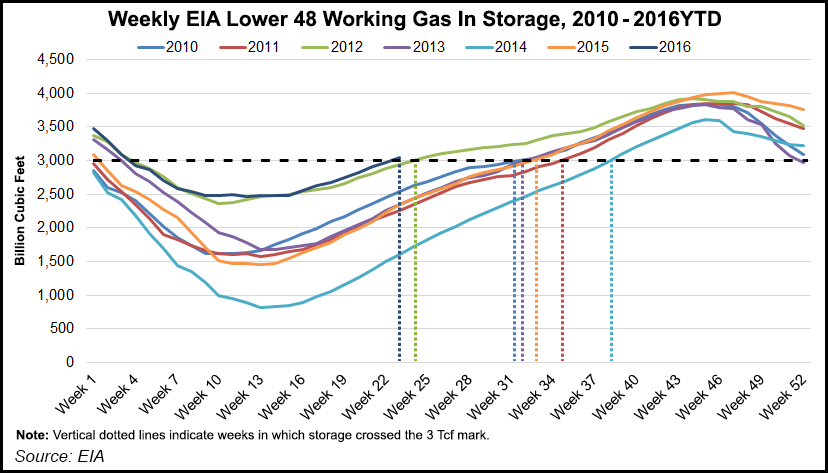 Such an early breach of 3 Tcf could spell storage difficulties down the road as abundant supplies compete for limited storage, or not. “The levels are really high, there is no question about it,” Tom Saal, vice president at FCStone Latin America LLC in Miami, told NGI. “But the amount going in on a weekly basis is below what people are looking for. They are definitely below any recent historical averages.

“There is either more demand or less supply or both, and I think the numbers that are below historical averages are pretty significant. The cure for low prices is low prices, and I think we are seeing the results of that.

Quotes in California suffered a similar demise as next-day power tumbled also. Intercontinental Exchange reported that on-peak power at NP-15 for Wednesday delivery fell $1.51 to $34.58/MWh and power at SP-15 tumbled $9.95 to $36.44/MWh.

Analysts see weather as the primary price driver and anticipate that extended heat is capable of carrying the market higher.

“Hot weather remains as the primary bullish force that has driven this month’s dramatic gains, and until the forecasts begin to normalize or show a sustainable cooldown, line of least price resistance could remain to the upside,” said Jim Ritterbusch of Ritterbusch and Associates in a Tuesday morning note to clients.

“While we approached the short side briefly before virtually scratching the trade, we have shifted off of a negative view as updates to the short-term temperature outlooks continue to advise much above normal temperature trends that spread across a broad portion of the U.S. While deviations from normal within the heavily populated northeast quadrant don’t appear sizable, there does appear to be enough heat on the horizon into the 4th of July holiday weekend to keep weekly EIA injections sharply downsized relative to both last year and the five-year averages.

“Our expected supply increase on Thursday would cut the surplus further by around 30 Bcf while reducing the overhang against last year by 20 Bcf. This dynamic of a sizable contraction in the large supply overhang will continue to be prioritized over the fact that the stock surplus will remain at around 670 Bcf following Thursday’s EIA report.”

Weather models warmed incrementally overnight. “Widespread above average period anomalies are expected during the six-10 day period. The most anomalous heat will continue to be found over the southwestern U.S,” said WSI Corp. in its Tuesday morning report. “Today’s forecast is warmer over the East. The Northwest and south-central U.S. are cooler. CONUS PWCDDs are up 1.7 to 63.8 for the period.”

Technical analysts and students of seasonality see the $1.611 low of March as a long-term cycle low, and typically natural gas will make a seasonal advance into May and then decline into summer. That dynamic, however, is under study. “My working assumption has been that the $1.611 low and its 11% bulls (Market Vane) was the 15-year cycle low for natgas,” said Walter Zimmermann, vice president at United ICAP. “The issue right now is whether we get a spring to fall decline.