Gas for delivery Wednesday added a few pennies in trading Thursday as double-digit gains in the East, along with some help from firm Rockies quotes, were able to surpass weak pricing in California, Texas, and the Gulf Coast. 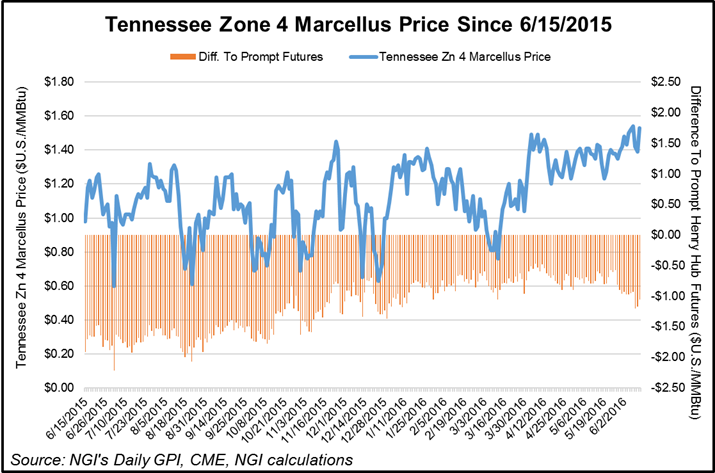 The NGI National Spot Gas Average rose 3 cents to $2.29, but the costliest gas in the country was seen on Florida Gas Zone 3 at $2.62. Futures started off on a soft note but managed to climb back into the plus column, settling above $2.60 for only the second time since the start of the trend higher from March.

The trend of gains by Marcellus points relative to downstream locations on the REX Zone 3 Expansion continued in Tuesday’s trading (see Daily GPI, June 7). The gains by Marcellus against downstream market points along the REX Zone 3 Expansion were modest but telling nonetheless. Marcellus points gained about a nickel while Indiana and Illinois interconnects added a penny. Gas on Dominion South added a nickel to $1.68, and deliveries to Tennessee Zn 4 Marcellus were also a nickel higher at $1.58. Next-day gas on Transco-Leidy Line Line added 3 cents to $1.50.

Downstream locations on the REX Zone 3 Expansion inched higher. Parcels at the NGPL interconnect at Moultrie County, IL, rose 2 cents to $2.45, and gas at the Putnam County, IN, junction with Panhandle Eastern was seen up a penny to $2.44. Gas on ANR at Shelby County, IN, rose a penny as well to $2.45.

Other market points were mostly steady. Gas at the Chicago Citygate was flat at $2.47 while deliveries to the Henry Hub were unchanged as well at $2.52. Gas priced at the SoCal Border Avg. Average fell a penny to $2.29, but gas at the always volatile Algonquin Citygate jumped 30 cents to $2.45.

Three weeks ago analysts were thinking that low prices (spot futures were just above $2) could only prevail if weather conditions were benign, EBW Analytics President Andy Weissman said in a webinar (see Daily GPI, May 19). “In our view, that is the only scenario in which that [low prices] would occur.”

Weather conditions have been more seasonal, and weather has not been benign. “We are not surprised that the market has gone up very strongly,” Weissman told NGI in an update Tuesday. “There is quite a bit of upside to the market. Exactly how high prices move depends on how quickly the market continues to adjust. The more rapidly it adjusts coal displacement declines and that tends to result in larger injections and to some degree moderates the price rise.”

“We expect to see production declines through September and any swings in drilling are only going to have an impact in tenths of a Bcf/d.”

He said his figures showed production declining 0.4 Bcf/d per month and at the end of the injection season production would be lower by 2 Bcf/d or more.

MDA Weather Services in its Tuesday morning six- to 10-day outlook said, “Trends were in the cooler direction along the Northern Tier from the Rockies to the Northeast, with this adjustment coming with support from model guidance for a deepened trough pressing into central Canada. Despite this feature, the large-scale pattern remains warm dominated, including a coverage of much above-normal temperatures in the Southwest.

“Aboves are also forecast to return to the East Coast by mid-period; although, some concern remains with what influence (if any) a lingering upper low along the coast may have within this period. Confidence is moderate overall.”

MDA said risks to the forecast include the “American model linger[ing], an East Coast upper level low for longer and is cooler in the Mid-Atlantic and Southeast as a result. The Southwest carries additional heat risk under a strong ridge aloft.”

Traders see a market leaning to the upside but aren’t quite willing to take a long position. “[A]lthough some moderation was seen in yesterday’s new weather models, consensus of forecasts continue to favor above-normal temperatures across the entirety of the U.S. that have been extended out to about the 27th of this month,” said Jim Ritterbusch of Ritterbusch and Associates in a Tuesday morning note to clients.

“As a result, the market is forced to price in some significantly downsized injections to be released by the EIA through the rest of this month that will keep the dynamic of a narrowing surplus much intact. But we also feel that this hot start within the early stage of the summer period has forced the market to price in an unusually warm July-August period that would keep CDDs much elevated in the process of further reducing the supply overhang.

“While an argument can continue to be made that the storage surplus required reduction anyway, the rate of decline is proceeding a bit faster than previously anticipated. Add in a recent upswing in coal-to-gas substitution and production slippage that will soon be approaching 2% on a year-over-year basis and conditions appear ripe for some fresh highs by week’s end that could carry nearby futures to almost 10 cents above [Monday’s] settlement. Nonetheless, we are reluctant to initiate a buy recommendation given what we view as unfavorable risk-reward ratios.”