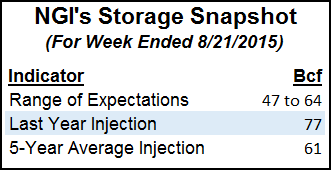 NGI’s National Spot Gas Average rose a penny to $2.55, and losses in the East and Gulf Coast were largely offset by stronger performances in the Midwest, Midcontinent, Rockies and California. Futures were hardly a bastion of inspiration, and at the close September had inched higher by 0.8 cent to $2.693 and October had also gained 0.8 cent to $2.703. October crude oil retreated 71 cents to $38.60/bbl.

Bidweek trading is well under way, and traders will no doubt see a spike in activity with the September futures expiration Thursday. For the moment, bidweek trades are coming in slightly less than current spot market quotes. According to the NGI Bidweek Alert, gas at the Chicago Citygate is trading between $2.78 and $2.79, and deals for gas on ANR SW are going for between $2.43 and $2.45. Gas on El Paso Permian for September is changing hands at $2.53 to $2.55 and at Opal bidweek volumes are quoted at $2.50 to $2.54.

An analysis by NGI of Chicago Citygate prices gives traders an idea of the seasonality of prices at the Midwest Hub. Analysis of the Chicago Citygate forward price curve shows the market’s current assessment of prices going forward. Not surprisingly prices typically peak in January and are weakest in June, and Chicago Citygate January is projected at $3.35 and June 2016 comes in at $2.71.

Overnight model runs shifted warmer. According to Commodity Weather Group in its Wednesday morning report, “The Midwest to East is same to warmer overall for next week going into especially the early 11-15 day, while we see some slightly warmer short-term West changes with cooler shifts next week.

“The South is slightly cooler in the short term into next week. The East Coast still has warmer to hotter risks next week with chances for more 90s than shown, but confidence struggles, especially late next week with risks for some cooling onshore flow,” said Matt Rogers, president of the firm.

Tim Evans of Citi Futures Perspective sees a moderate tightening of storage as the injection season winds down. “Although there’s risk that a larger than projected storage refill for last week or a change in the weather forecast will shift the storage outlook, our current base case scenario features a modest overall decline in the year-on-year average storage surplus from 80 Bcf as of Aug. 14 to 66 Bcf as of Sept. 11,” he said in closing comments to clients Tuesday.

Evans is looking for a 47 Bcf build in this week’s report. “A declining year-on-five year surplus confirms a moderate tightening of supplies on a seasonally adjusted basis, which tends to support a rally in prices,” he said.

Evans contends that natural gas is “conservatively valued” at the bottom of its five-year price range for this time of year, with only a moderate storage surplus. “In our view, this should mean less downside risk than upside potential, giving us at least a moderately bullish bias. Over the intermediate term, we think this could translate into a move to $3.25 or perhaps even $3.50 as a Q4 peak.”

Other estimates of Thursday’s storage build include IAF Advisors at 61 Bcf, United ICAP also at 61 Bcf, and a Reuters poll of 20 traders and analysts showed an average 59 Bcf with a range of 47 Bcf to 64 Bcf. Last year 77 Bcf was injected and the five-year pace is 61 Bcf.

In its 2 p.m EDT Wednesday report, the National Hurricane Center (NHC) said TS Erika was holding winds of 45 mph and was 245 miles east of Antigua. It was heading west at 17 mph and was projected to move toward Florida and the Bahamas.

Jeff Masters, meteorologist at Wunderground.com said “that Erika continued to be disorganized in the face of dry air and wind shear… Erika had only a modest area of heavy thunderstorms on its east side, and these thunderstorms did not change much in intensity or areal coverage on Wednesday morning. Wind shear due to upper-level winds out of the west was a moderate 10-20 knots, and this shear was driving dry air on the northwest side of Erika into its core, disrupting the storm. Sea surface temperatures were favorable for development, though-near 28 degrees C (82 degrees F).