Physical natural gas prices for Friday delivery got a nice boost in Thursday’s trading as a supportive screen over the last several sessions worked to tug an otherwise uncooperative cash market higher. 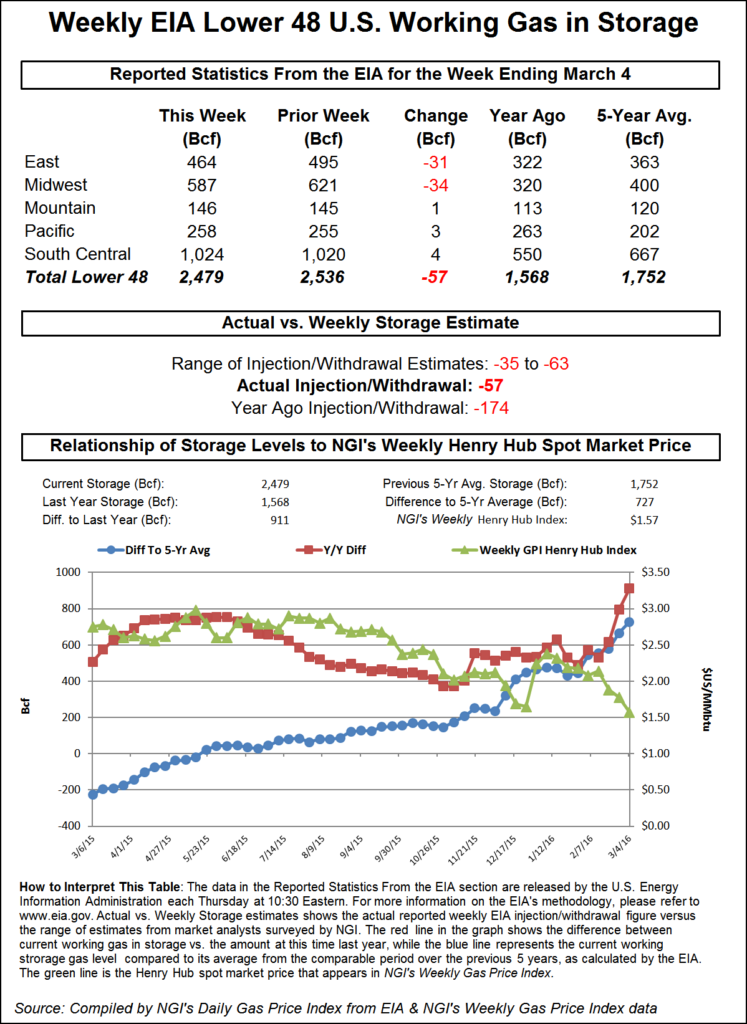 Nearly all points followed by NGI were higher, posting gains of about a nickel but in some instances into the double digits. The NGI National Spot Gas Average rose 8 cents to $1.52, and eastern points, on average, were up more than a dime.

The Energy Information Administration (EIA) reported a withdrawal of 57 Bcf, right on target with trader expectations, but substantially less than historical averages. April futures moved a few pennies after the number was released, and at the close April had recorded a gain of 3.6 cents to $1.788 and May had risen 3.7 cents to $1.883. April crude oil dropped 45 cents to $37.84/bbl.

The jury is out on next week’s storage report, but with the 57 Bcf pull reported this week, inventories now stand at a plump 2,479 Bcf. There is a strong likelihood that the current storage level may be etched in the record books as the highest season-ending figure ever. According to EIA data, the next-highest ending inventory was recorded during February 2012 at 2,449 Bcf. According to a Reuters survey, next week’s early numbers suggest a build of 21 Bcf to a draw of 6 Bcf with an average 6 Bcf increase estimate.

The likely record-setting season-ending inventory was already in the cards inasmuch as last year at the same time 174 Bcf was pulled from storage and the five-year average came in at a 118 Bcf pull. For the week ended March 4, estimates were coming in at less than half of those numbers.

IAF Advisors calculated a 62 Bcf decline, and Bentek Energy, utilizing its flow model, calculated a 60 Bcf withdrawal. A Reuters survey of 20 traders and analysts showed an average 57 Bcf draw with a range of -65 to -44 Bcf.

With supplies as burdensome as they are, analysts were expecting a limited market reaction once the number hit trading screens. “Stocks are now nearly 800 Bcf higher that this time last year — a whopping 45.6% surplus. High side surprise or not, we can’t imagine the price action following this week’s EIA report to do anything but fizzle,” said John Sodergreen, editor of Energy Metro Desk.

Going forward all indications are that storage will be limited. “A big chunk of the market in the summer is storage,” said a pipeline industry veteran. “If that decreases by 40%, you will need to see a change in pricing by an equivalent amount. It’s supply and demand. Do we see more gas being shut in because of it?”

Weather model runs have changed little, with anomalous temperature patterns from 15 degrees to 30 degrees above normal common. Natgasweather.com said, “There haven’t been any major changes to show up in the latest midday weather data, with a stormy but mild pattern expected through much of next week, but still with some cooling expected to push across the Canadian border into the northern U.S. around March 19-20th to bring more seasonable natgas demand.

“Overall, a very stormy but mild pattern is expected through next week, with weather systems traversing the country with showers and thunderstorms but playing out quite mild. This is expected to be followed by at least some cooling arriving at the very end of next week into the following week for at least a couple days. Prices have held up quite well in the face of much lower than normal natgas demand this week and expected to last through much of next, suggesting other market factors are pushing prices higher waiting on at least more seasonal natgas demand to finally return.”

In the physical market, prices at major hubs showed solid gains for the most part. Gas at the Chicago Citygate was flat at $1.77, but at the Henry Hub next-day packages were seen 13 cents higher at $1.70.