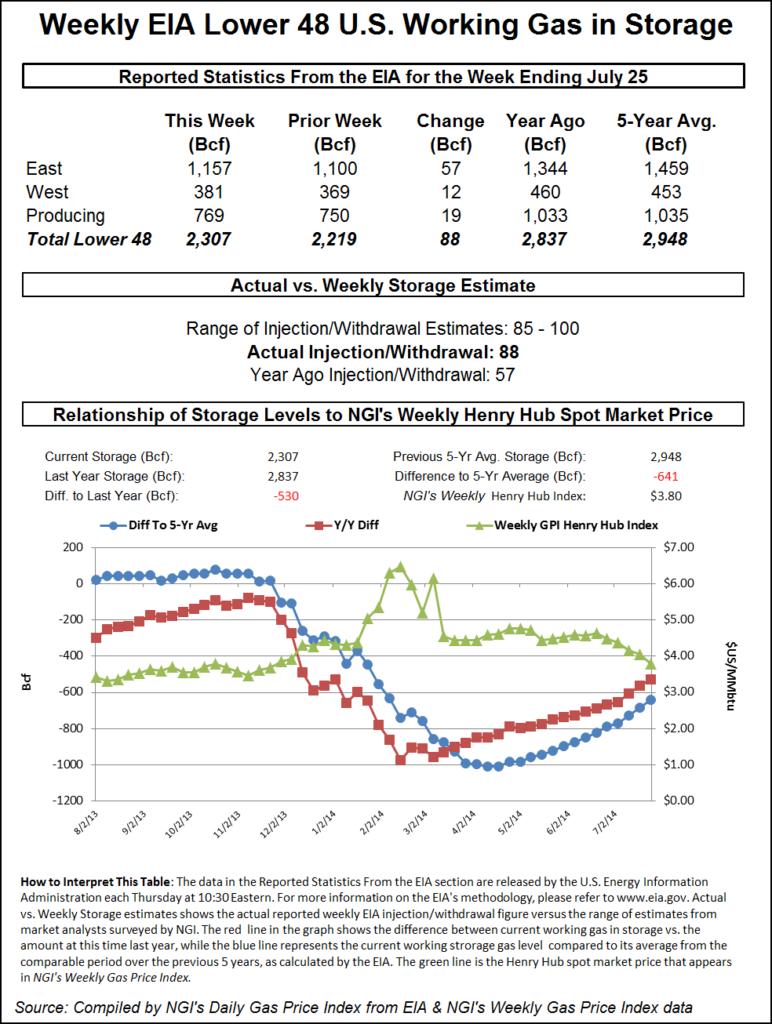 In spite of weather forecasts calling for temperatures in Texas to remain above the century mark for the next week, double-digit declines in the physical natural gas market were the rule, with all NGI indexes in the red. The NGI National Spot Gas Average skidded 9 cents to $2.52, and losses at eastern points pushed 15 cents.

Futures traders saw no reason to get excited about storage injection data coming in well below everyone’s estimates, and at the close September had added a miserly 1.5 cents to $2.813 and October had gained 1.4 cents to $2.835. September crude oil continued to struggle and lost 49 cents to $44.66/bbl.

The market response to the EIA storage report showing a 32 Bcf injection for the week ended July 31 wasn’t quite as weak as the nearly 10-cent drop in September futures a week ago when a reported 52 Bcf build hit trading screens, about 2 Bcf below expectations, but it was out of character nonetheless.

Futures traders were on the lookout for one of the thinnest storage builds of the season. Last year, a stout 83 Bcf was injected, and the five-year pace is 53 Bcf. IAF Advisors of Houston calculated an increase of 39 Bcf, and Genscape was looking for a 40 Bcf build. A Reuters survey of 27 traders and analysts revealed an average 42 Bcf with a range of 38 to 47 Bcf.

The hot, humid weather of last week prompted power loads not seen in three years and was expected to generate the thinnest storage build in more than a month. “Power demand matched the all-time weekly high during the week, averaging nearly 35.7 Bcf/d and set a new single-day record of 38.4 Bcf/d, which is more than 0.6 Bcf/d above the previous record which was set in 2011,” Bentek Energy said in a report.

“It was a halfhearted rally that failed against $2.83, which is the next resistance level,” said a New York floor trader. “If the market gets below unchanged, I think it will test $2.78.”

Tim Evans of Citi Futures Perspective said, “the 32 Bcf net injection for the week ended July 31 was clearly below the 42 Bcf expectation and bullish relative to the 53 Bcf five-year average as well. There were no reclassifications of gas or other adjustments mentioned in the report.”

Inventories now stand at 2,912 Bcf and are 535 Bcf greater than last year and 64 Bcf more than the five-year average. In the East Region 36 Bcf was injected and the West Region saw inventories increase by 2 Bcf. Stocks in the Producing Region fell by 6 Bcf.

In physical market trading, the day’s action was almost equally counter-intuitive. Continued high power loads and elevated prices failed to stir the interest of gas buyers. Intercontinental Exchange reported that next-day peak power at ERCOT N soared $109.00 to $175.00/MWh, and Wunderground.com forecast the highs in Dallas for the next week at 100 or higher, 6 degrees above normal.

Gas at Carthage for Friday delivery retreated 7 cents to $2.75, and deliveries to the Houston Ship Channel fell 3 cents to $2.78. Gas on Tennessee Zone 0 South slid 6 cents to $2.68, and packages on El Paso Permian changed hands 7 cents lower at $2.71.

Upstream points in the Marcellus were also soft. Gas on Millennium shed 7 cents to $1.18, and deliveries to Transco-Leidy Line were seen 6 cents lower at $1.20. Gas on Tennessee Zn 4 Marcellus fell 6 cents to $1.10, and gas on Dominion South was seen down 2 cents to $1.25.

“Forecast confidence is considered near average standards regarding the large-scale pattern across the Lower 48 but has fallen to below average standard over the SPP and ERCOT pools.”