Natural gas prices had the trajectory of a coyote in a Saturday morning cartoon for the week ended Feb. 19. Not one market point traded in positive territory and after the dust settled the NGI Weekly Spot Gas Average was down a not-so-healthy 54 cents to $1.77. 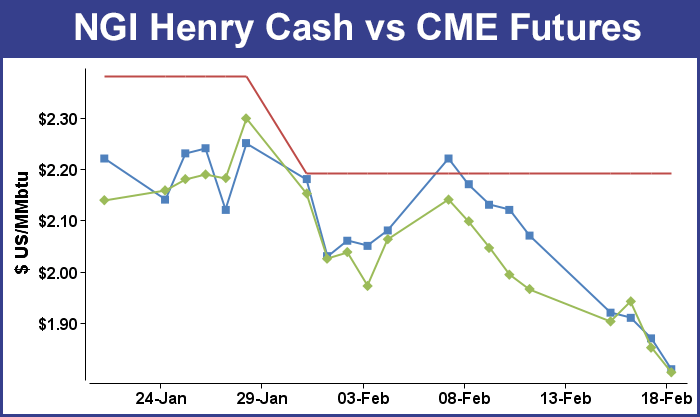 Curiously, of the actively traded points those proving to be the most resilient were in the Marcellus, which has been long pummeled by oversupply. Tennessee Zone 4 Marcellus eased 2 cents to $1.19 and Transco Leidy also fell just a couple of pennies to $1.23. At the bottom of the leader board was Transco Zone 6 New York with a drop of $3.24 to $1.94, followed closely by Algonquin Citygate with a loss of $2.88 to $3.13. Regionally, the Northeast fared the worst, losing $1.34 to $1.82, and both South Texas and East Texas lost the least, falling 26 cents to $1.79 and $1.78, respectively.

Other regions were closely bunched. The Midcontinent fell 35 cents to $1.69 and both the Midwest and Rocky Mountains came in down 28 cents to $1.88 and $1.58, respectively.

March futures for the week sank 16.2 cents to $1.804, only a penny above the lowest March futures print for the entire week. Much of that decline can be seen in the market’s response to Thursday’s Energy Information Administration (EIA) storage report. The EIA reported a withdrawal of 158 Bcf in its inventory report for Feb. 12, about 4 Bcf greater than what the market was expecting. March futures rose to an intra-day high of $1.911 in the minutes following the release of the storage data, but nonetheless that was still down 3.2 cents from Wednesday’s settlement.

“You would think off of this it would be bullish, but we are trading right in mid-range on the day,” said a New York floor trader. “We were trading at $1.880 before the number came out and we are at $1.910 now. The market didn’t touch the day’s highs or lows.”

Analysts saw the number as mildly supportive. “The 158 Bcf net withdrawal for last week was somewhat more than expected and may support market sentiment on that basis,” said Tim Evans of Citi Futures Perspective. “At the same time, however, we note the draw was still less than the 170 Bcf five-year average and so still somewhat bearish on a seasonally adjusted basis. With forecasts for mild temperatures ahead, we’d also suspect that any upward price reaction off the storage report may prove short-lived as the overall bearish trend of below-average storage withdrawals is likely to continue.”

Inventories stand at 2,706 Bcf and are still a hefty 532 Bcf greater than last year and 555 Bcf more than the five-year average. In the East Region 51 Bcf was pulled, and the Midwest Region saw inventories fall by 50 Bcf. Stocks in the Mountain Region were down by 4 Bcf, and the Pacific Region was lower by 3 Bcf. The South Central Region shed 50 Bcf.

In trading Friday both physical natural gas for weekend and Monday delivery and futures fell. Physical traders saw no reason to commit to three-day deals with mild weekend temperatures expected and abundant storage.

In some metropolitan areas temperatures were forecast close to 20 degrees above normal. The NGI National Spot Gas Average dropped 9 cents to $1.68, led by eastern declines running close to 20 cents. Futures bulls threw in the towel when the April contract failed to meet short-term objectives. At the close March had fallen 4.8 cents to $1.804 and April was off 6.0 cents to $1.867. March crude oil skidded $1.13 to $29.64/bbl.

Nymex floor traders were looking for the market to hold a key support level. “It tried to hold and we were looking for April to hold right at $1.88 to $1.89, and when it didn’t the market dropped another 2 cents,” a trader told NGI. “There is cold weather out there, and I think natural gas should be over $2 but the whole complex is dragging it down. It’s really disheartening.”

Cold is relative and temperatures aren’t expected to turn much colder in the next two weeks, according to forecasts. Traders are already looking ahead to winter when demand for the fuel will fall further.

“With temps forecast to be in the mid 50s here in the New York City area, all signs continue to point lower” for natural gas prices, said Frank Clements, co-owner of Meridian Energy Brokers Inc. in New York, in a note.

In the physical market much-above-seasonal temperatures in key markets knocked the socks off spot prices for weekend and Monday delivery. Forecaster Wunderground.com predicted the high Friday in New York City of 38 degrees would rocket to 61 Saturday and ease down to 46 by Monday, still 3 degrees above normal. Chicago’s Friday high of a comfortable 64 was seen sliding to 54 by Saturday and dropping to 36 by Monday, the seasonal norm.

Major market hubs were soft also. Gas at the Chicago Citygate slumped 4 cents to $1.88, and deliveries to the Henry Hub shed 6 cents to $1.81. Gas on Kern River changed hands 4 cents lower at $1.55, and parcels at the SoCal Citygate dropped 8 cents to $1.82.

Analysts still see the bottom open relative to futures markets. “Updates to the short-term temperature views still appear bearish with above-normal temperatures spread broadly across the western half of the U.S.,” said Jim Ritterbusch of Ritterbusch and Associates in a note to clients. “As a result of these weather forecasts, it would appear that additional major expansion in the supply surplus lies ahead.”

Ritterbusch sees Thursday’s storage at 2,706 Bcf and that combined with “an unusually mild March eventually resulting in an end-of-season supply that could easily approach 2.3 Tcf. In the background, an ongoing tendency toward price-induced coal-to-gas substitution is still being overwhelmed by a recent upswing in production out of the prolific eastern region. And while the recent accelerated decline in the rig counts has helped to slow price declines, it has not yet been able to drive a bottom into this market.

“Another round of lows would appear to set up further declines to the lows in the January 2016 futures that were established in December at the $1.68 area. However, we are viewing this level as out of reach assuming normal temperature trends across the month of March. For now, we will suggest acceptance of profits at the 1.91 level per April futures that would imply a gain of around 30 cents from suggested entry point. From there, we will await a price advance back into the 2.00-2.10 zone to re-establish a bearish holding.”

Gas buyers for power generation across the MISO footprint should have abundant wind generation Friday but will likely be augmenting that power with purchases for the balance of the weekend, according to forecaster WSI Corp.

“An area of low pressure will continue to traverse the northern tier today with a little light rain, mix and snow,” the forecaster said. “A strong south to west-northwest wind will pump anomalous warmth into the region during the next couple of days. High temps will range in the 30s, 40s and 50s north; 60s and 70s south. A cold front will begin to sag southward during Sunday into Monday with a chance of rain and snow showers. This will usher colder, more seasonable conditions into the power pool early next week with highs in the 20s, 30s and 40s north; upper 40s, 50s and 60s south.

“The frontal system will lead to high winds and strong wind generation [Friday]. Total output is forecast to peak 10-12 GW. Wind generation will abruptly decrease during Saturday and remain relatively light into the start of next week.”