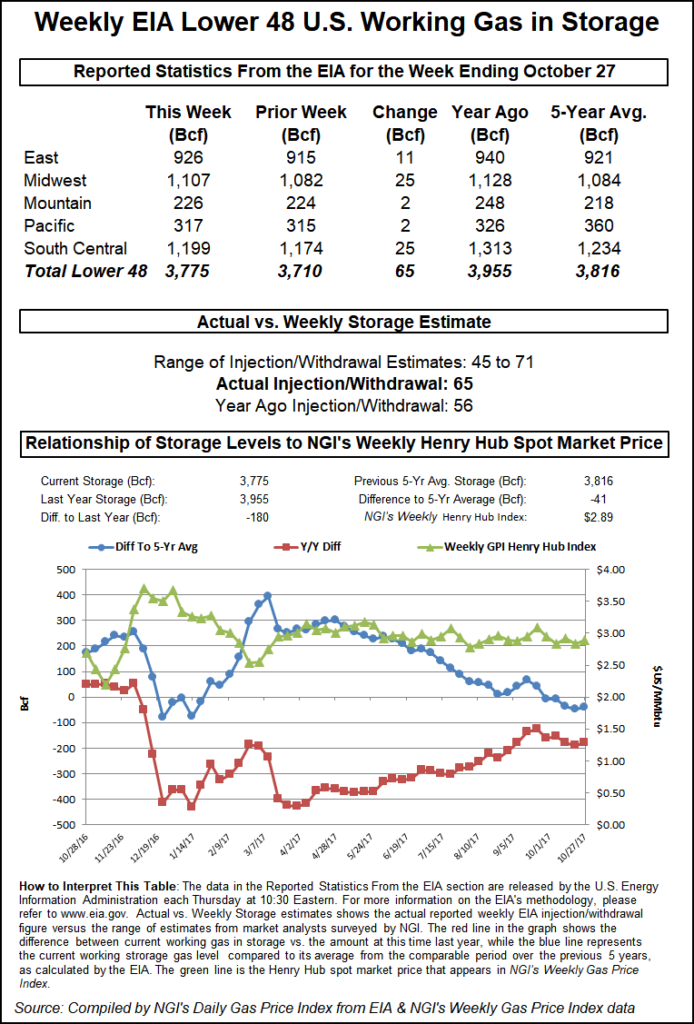 Just before report time the market was hovering around $2.926 and following the release of the number December futures barely moved, failing to take out the day’s high or low. By 10:45 a.m. December was trading at $2.938, up 4.3 cents from Wednesday’s settlement.

Prior to the release of the data traders were looking for a storage build slightly less than the actual figures. Last year 56 Bcf was injected and the five-year average stands at 60 Bcf. Citi Futures was looking for a 52 Bcf injection and Raymond James calculated a 70 Bcf build. A Reuters survey of 26 traders and analysts showed an average 62 Bcf with a range of +45 Bcf to +71 Bcf.

“I thought the number was a little bearish, so we should have been lower,” said a New York floor trader. “There was no reaction to the number when it was released, and it wasn’t until about 10 minutes after the number came out that it made a new high.

“Somebody came out and said, ”Hey why not run this market up to $2.947, we haven’t got anything better to do,’” the trader mused.

“It seems that every time we close one month and trade the next month, if that month is trading above $3 then we seem to be able to get it under $3. $3 is proving one impenetrable barrier.”

Inventories now stand at 3,775 Bcf and are 180 Bcf less than last year and 41 Bcf less than the five-year average. In the East Region 11 Bcf were injected, and the Midwest Region saw inventories rise by 25 Bcf. Stocks in the Mountain Region and the Pacific Region rose by 2 Bcf. The South Central Region added 25 Bcf.