Domestic natural gas production — as fuel and feedstock — is powering the U.S. manufacturing economy, and its role is only expected to grow in the coming years, according to a study by IHS Economics prepared for the National Association of Manufacturers (NAM). 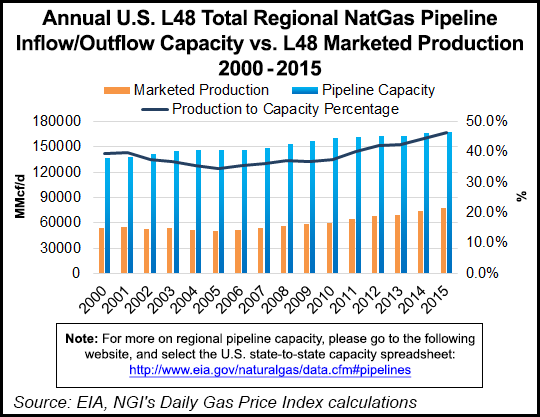 “Over the next decade our nation’s demand for natural gas is only going to grow, and much of that growth is from manufacturing,” said NAM CEO Jay Timmons. “This study unequivocally shows that if our growing demand is not taken seriously by policymakers we will have a serious lack of infrastructure that will jeopardize our growth.”

IHS conducted the study for the NAM Center for Manufacturing Research. It focuses on the benefits of natural gas pipeline development to the nation’s manufacturing sector and found that:

“Infrastructure development in the North American pipeline and storage grid over the next 10 years will be driven by producers’ choices of how to profit from production growth out of the Marcellus and Utica plays,” IHS said in the study.

“IHS expects new infrastructure development to spread in all directions from Appalachia to support 22.7 Bcf/d of productive capacity growth from the Marcellus (19.3 Bcf/d) and Utica (3.4 Bcf/d) between 2015 and 2025. Producers and shippers have signed up for long-term contracts on pipeline capacity additions to downstream consuming markets totaling about 23.7 Bcf/d at this point and representing almost $30 billion in investment.”

While the manufacturing trade association clearly supports natural gas pipeline development, others, such as landowners and some public/regulatory officials, particularly in the Northeast, are opposed.

“…[A]s U.S. production activity shifts to Appalachia, many pipelines originating in traditional Western and Gulf Coast supply regions are facing increasingly difficult operating conditions,” IHS said. “Pipelines out of the Rockies, the Haynesville, the Barnett, and even the Fayetteville [shales] may have difficulty renewing long-term contracts that expire later this decade or in the early 2020s. Beyond 2025, the growth in demand for gas-fired power generation will have a significant impact on the pipeline system.”