Falling oil prices could turn the tide against some projects to export liquefied U.S. gas to global markets, Fitch Ratings has warned. 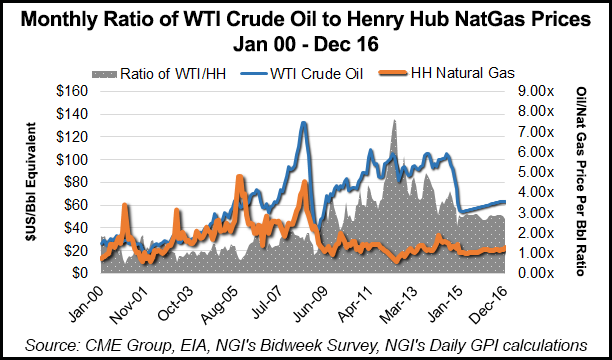 While global liquefied natural gas (LNG) projects have typically been backed by supermajors and national oil companies, U.S.-based projects are more commonly the work of smaller, less-diversified companies. Generally, financing for these projects is underpinned by LNG tolling agreements, Fitch said. These factors make U.S. LNG vulnerable in a world in which oil prices — usually the index for global LNG prices — have fallen by nearly 50%, and Henry Hub prices for natural gas could rise, Fitch said.

“The recent drop in oil prices has tempered longer-term market oil price expectations, which could challenge offtake contract negotiations creating delays and/or changing the terms of tolling arrangements,” the ratings agency said. “The oil and gas price outlook is a key component for a sponsor to make a final investment decision and/or offtaker to sign a long-term (e.g., 20-year) agreement.”

Projects that have their tolling agreements inked and regulatory approvals in place are not so much imperiled as projects that still have to sign up offtakers for LNG supply, Fitch Ratings’ Gregory Remec, senior director, told NGI.

“From the developers’ standpoint…first and foremost it will be very difficult to build something on a project finance basis without having a tolling agreement in place,” Remec said. “The projects that are coming on now, they’ve gotta find strong offtakers. If they can find strong offtakers, that will certainly help them from a financing standpoint.

“I think overall, the drop in oil prices shows that oil-linked prices aren’t always going to be automatically higher…I think in a high-oil price environment, people thought, ”oh this is just going to stay this way forever,’ and therefore you did have a definite price advantage when you looked at Henry Hub tolling arrangements.”

“Nevertheless, the oil price drop could slow the momentum behind new U.S. LNG facilities in the Federal Energy Regulatory Commission approval queue,” the ratings agency said. “The recent oil price decline as well as idled LNG regasification facilities in the U.S. should act as a reminder of the financial risks associated with these costly, long-dated directional bets.”

Despite the narrowed price spread, LNG from the United States still holds appeal for global buyers, Remec said. That’s because it offers supply security as well as supply portfolio diversity. “They’re still selling strong access with good visibility on what the pricing is,” he said.