C&J Energy Services Inc. late Wednesday agreed to merge with Nabors Industries Ltd.’s completions arm in a $2.86 billion deal that would create one of the largest hydraulic fracturing (fracking) businesses in North America. 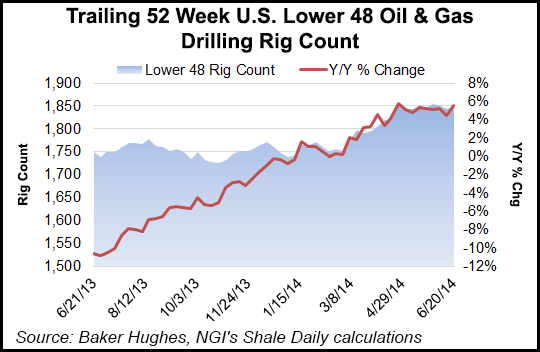 Nabors’ completion and production arm is the sixth largest in the United States. C&J owns the 13th biggest fleet of trucks used in U.S. fracking operations.

The combined Houston-based company would retain the C&J name and existing management team, led by founder and CEO Josh Comstock, who called the transaction monumental.

“Among many key strategic benefits of this combination is accelerated growth and scale, enabling the rapid advancement of our stated goal of transforming C&J Energy Services from what I started as a small energy services company to a diversified, large-scale, global provider of technologically advanced services.”

Nabors operates the largest land drilling rig fleet in the world, with about 500 rigs (490 land rigs) working in more than 25 countries and nearly every significant oil and natural gas basin, including the offshore, Alaska and in North America, its biggest market.

“The combined company will possess greatly increased capacity for our best-in-class hydraulic fracturing, coiled tubing and wireline offerings, and introduce cementing to our suite of completion services,” said Comstock. “The addition of Nabors’ industry-leading production services business will also bring meaningful diversification to our operations.”

In addition to its suite of completion, stimulation and production enhancement services, C&J manufactures, repairs and refurbishes equipment, and provides parts and supplies for third-party companies in the energy services industry. Last year it launched a specialty chemicals business, which provides fluids for fracking operations.

“The combination offers compelling financial synergies,” Comstock said. “The diversified revenue base, enhanced earnings and increased cash flow capacity of the combined entity, coupled with the expanded scale and service offering, will enable us to further accelerate our growth strategy, both domestically and internationally.”

Under terms of the agreement, Nabors would convey its completions businesses in North America to an existing Bermuda subsidiary (New C&J). A Delaware subsidiary of New C&J would merge with C&J, surviving the merger as a subsidiary. Common shares of C&J would be converted into New C&J shares on a 1:1 basis, tax free to C&J shareholders.

Following the merger, the company would be named C&J Energy Services Ltd. and be listed on the New York Stock Exchange under “CJES.”

Nabors will receive total consideration of about $2.86 billion, comprised of 62.5 million New C&J common shares and $940 million in cash. Once completed, Nabors would own 53% of the new company with existing C&J shareholders owning the rest.

Nabors has been undergoing a transformation in the past couple of years, but its focus remains in the United States and Canada. At the end of March Nabors had 286 rigs running in the Lower 48 states, including 172 high-tech alternating current (AC) rigs and 88 silicon-controlled rectifiers (SCR) with walking systems. Thirteen of the domestic onshore rigs have moving systems. In addition, 26 mechanical rigs remain in operation in the U.S. onshore.

Nabors had 64 rigs active in Canada, with 17 AC and 40 SCR, along with 19 onshore in Alaska, including five AC and 12 SCR rigs. Fifty rigs operate in the offshore.

Besides scale, C&J would gain by a big reduction in its effective tax rate. Nabors is incorporated in tax-free Bermuda, while the company is run from Houston. C&J’s effective tax rate has averaged around 37% over the past four years, while Nabors recorded a negative income tax expense in 2013.

C&J’s Randy McMullen is to serve as CFO, and he and Comstock are to enter into employment agreements with the new company. The board would consist of seven people, with Comstock as chairman.

Still needed is approval by C&J shareholders and other customary federal approvals. If all goes to plan, the transaction is set to be completed by the end of the year.