Second quarter results for the oilfield services industry have basically been play, rewind, repeat, and Nabors Industries Ltd.’s management team mirrored some of the same things as its peers, including a more cautious approach by Lower 48 customers and stronger activity overseas. 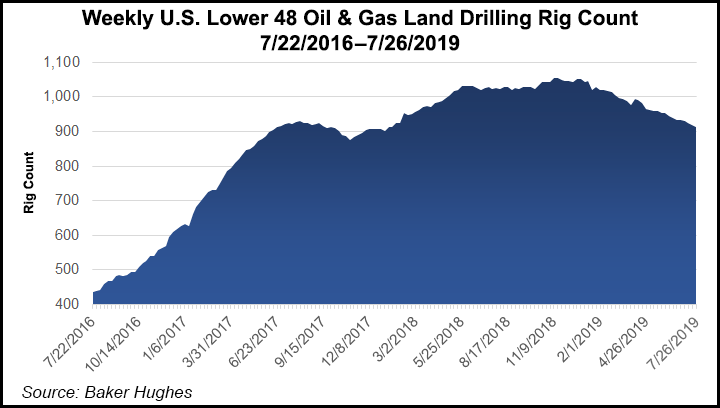 The company owns and operates the world’s largest land-based drilling rig fleet, as well as offshore drilling rigs. It has around 100 super-specification (spec) rigs, with more than one-third contracted by oil majors.

“For our industry, the quarter was marked by continued gradual softening of drilling activity in the Lower 48 and a more positive outlook internationally,” CEO Tony Petrello said of second quarter results. “We are seeing the same broad market trends and expect they will continue throughout the third quarter.

“Discussions with our customers indicate a modest temporary reduction in our Lower 48 results, with improvement in our International second-half results.”

Even with the decline in the industry’s Lower 48 rig count, Nabors increased its total by three to 115, with five upgraded rigs deployed during the quarter.

CFO William Restrepo said the ongoing volatility in oil prices has resulted in “caution on the part of our U.S. customer base,” but Nabors still expects to see improving results through the rest of the year.

“This view is based on limited downside in the Lower 48, an improving outlook in certain international markets and Drilling Solutions, as well as seasonal recoveries in Canada, Alaska and offshore.”

Nabors’ U.S. strategy, “to deploy the highest-specification rigs to the industry’s most demanding customers has been successful, as demonstrated by our Lower 48 results,” Restrepo noted. “However, we also believe the current market conditions are likely to result in a temporary decrease in utilization in our Lower 48 operations during the third quarter.

“Nonetheless, we are encouraged by customer inquiries regarding the availability of our higher-spec rigs to support their drilling plans for early 2020, which we expect to benefit our fourth quarter 2019 results.”

“Our Canada rig count averaged 7.4 rigs with the seasonal downturn, an 8.9 rig reduction compared to the first quarter. We also anticipate a third quarter improvement in Canada as seasonal activity recovers. Our rig count in Canada is expected to approach 15 rigs in the fourth quarter.”

In the international market, Nabors has yet to benefit from increased rig demand; the count fell by one in the quarter. Two rigs in Argentina, which were extended for a multi-year term, were idled temporarily because of mandatory recertifications before the new term contract begins.

In the Rig Technologies business, an improvement was seen in aftermarket content from more third-party sales, lower costs and initial revenues in robotics. Drilling Solutions grew despite the loss of some revenue on third-party rigs that were shut down.

“Meanwhile, we continue to see greater penetration of our automation and integration initiatives,” Petrollo said. Additional jobs are coming in for the directional automation systems Navigator and ROCKit Pilot, which are working today for seven customers in four basins.

Capital expenditures (capex) during 2Q2019 were higher than expected at $131 million, which reflected Lower 48 rig upgrade deployments that were ahead of schedule, bringing year-to-date capital spending to $275 million. Capex through year’s end is forecast to decline, with no additional Lower 48 rig upgrades scheduled and international expenditures for several rig deployments winding down.