Contract driller Nabors Industries Ltd. has reduced its global workforce by nearly 5,500 people, or 18%, since the end of December, with most of the reductions hitting U.S. and Canadian staff. 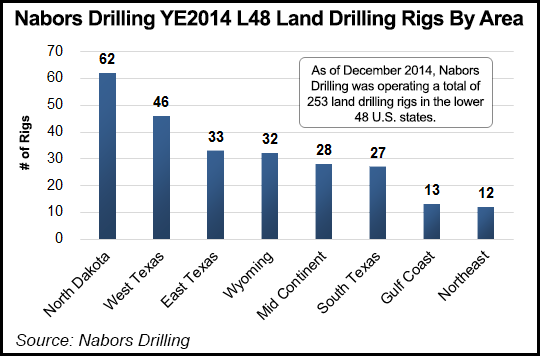 The U.S. claimed the largest part of the drilling employee reduction, losing 41% of its workforce while the company cut 26% of its Canadian jobs.

Hit by the oversupply situation, “activity has particularly slowed in the Bakken and Midcontinent regions, with utilization rates dropping 20% across all regions,” said Nabors CEO Tony Petrello. He is not seeing any immediate relief. “Although the decline in the U.S. has begun to moderate, further weakening is expected in the Lower 48 and Canada during the second quarter.”  The quarterly results also should be impacted by “usual seasonal declines” in Alaska and Canada.

The Bermuda-based operator has the largest land drilling rig fleet in the world, with about 500 rigs (490 land rigs) working in nearly every significant oil and natural gas basin, including the offshore, Alaska and North America, its biggest market.

“Solid improvements in our international, Alaska and rig services operations were insufficient to offset the combined effects of the sharp drops in activity we experienced in completion and production services, as well as in our U.S. Lower 48 and Canada rig operations,” Petrello said. “Significant efforts” were made in the North American operations to align with new activity levels, which led to the decision to lay off a big chunk of its workforce. Excluding the impact of the severance charges, Nabors also cut its selling, general and administration expenses by $20 million from fourth quarter levels.

“It has been a painful but necessary exercise given the expected duration of this downturn,” Petrello said. In March, Nabors already had axed 12% of its 29,000 employees (see Shale Daily, March 6).

CFO William Restrepo said the main focus today is “on managing through this severe downturn.” To that end, the company has “expanded our commercial efforts in marketing our drilling rigs, as well as cross-selling and seeking new opportunities for additional drilling-related services” and has rapidly aligned our direct costs with the current activity level.”

Nabors has targeted 2015 capital expenditures below $1 billion, half its initial expectation, Restrepo said.  “We continue to work with our suppliers to reduce costs of consumables, services and capital equipment.” The company also has “reduced our debt materially while negotiating increased credit facilities at favorable rates.

“Although much remains to be done and we expect a challenging market environment for the remainder of the year, we believe our ongoing efforts will enable us to exit this downturn well prepared to continue strengthening our position as the leading global land driller.”

Last month Petrello said Nabors was scaling back the pace of new U.S. rig construction and would make further adjustments based on the outcome of discussions regarding additional rig rewards. In discussing the first quarter results, he said there were some positives, including closing the merger with C&J Services Inc. (see Shale Daily, June 26, 2014). The tie-up with Nabors’ completions arm has created one of the largest hydraulic fracturing businesses in North America.

“Our 53% equity ownership in the combined entity allows us to maintain exposure to these markets with a highly capable and efficient operator while improving our financial flexibility,” Petrello noted. “We remain confident in the ability of the C&J team to materially improve the results of our contributed business and to capture significant synergies from this combination.”

Lower 48 operations experienced a 27% revenue reduction, but held its operating margin, minus severance, at 12.7%. In the Lower 48, daily drilling margins per rig increased by $676 to $11,134, including lump sum early termination revenue equivalent to $105/day. Dayrate reductions were offset by mix effects, as the proportion of older, lower-margin rigs decreased, and by proactive cost reduction efforts.

Canada drilling revenue fell by 34% in the first three months versus a year ago, with operating margins falling by 330 basis points to 13.2%. “This margin resiliency reflected early action on adjusting the cost structure to anticipated revenue reductions and aligning the overhead structure to the falling activity levels,” management noted.

Activity in Alaska “continues to be strong, with year-over-year increases anticipated as results from recent new rig awards are realized.” The company expects lower results in the Gulf of Mexico “until the fourth quarter, when its new deepwater platform rig is scheduled to commence operations.”

The Completion and Production Services business line recorded a quarterly operating loss of $58.5 million, primarily because of a sharp decline in utilization and pricing in the completions business. Many production companies are delaying completions to wait out better commodity prices (see Shale Daily,April 10).

“Activity for the year started slowly, with clients generally delaying well completions and weather affecting operations in West Texas and in the Rockies,” the company noted. “Revenue started to rebound late in the quarter. Direct cost and overhead reductions lagged those achieved in the drilling business, as the pending transaction [with C&J] delayed actions that would have otherwise been completed during the first quarter.”

“Nabors plans to emerge from the current market in a stronger competitive position and has several strategies underway to achieve this objective,” he said. “At the same time, we are committed to maintaining our technology development initiatives, several of which are already deployed in the field. We are well positioned financially, operationally and technically to endure the effects of a protracted down cycle, and plan to take advantage of attractive risk-adjusted newbuild and strategic opportunities as they present themselves.”