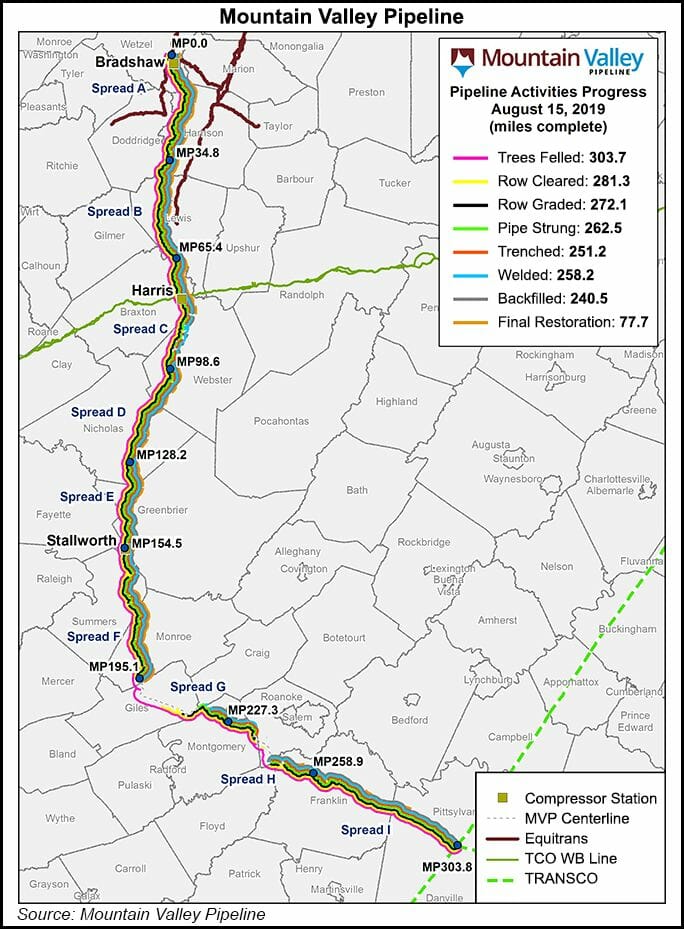 Late last week, the USFWS notified FERC that it had finished drafting an up-to-date Biological Opinion (BiOp) and Incidental Take Statement (ITS) for the pipeline, part of federal requirements to review potential impacts to protected species from project construction.

The newly issued opinion takes into account “new data” and ensures “that we continue using the best available scientific and commercial information,” the USFWS wrote in a memo to the Federal Energy Regulatory Commission.

MVP first received a BiOp and ITS in 2017 as part of the FERC certification process. However, the BiOp and ITS came under the scrutiny of the U.S. Court of Appeals for the Fourth Circuit, leading to a work stoppage last year while the USFWS reinitiated its consultation process and worked on reissuing the approvals.

With the new USFWS permits in hand MVP has cleared “a key hurdle” in its efforts to place the 42-inch diameter pipeline into service, according to analysts at ClearView Energy Partners LLC. ClearView analysts said in a note to clients that they expect MVP to seek FERC approval to resume construction.

The memo from USFWS “specifically states that this document replaces the BiOp and ITS issued in 2017,” the ClearView analysts wrote. “Therefore the Fourth Circuit order suspending the 2017 permits becomes irrelevant as FERC would be authorizing Mountain Valley to resume work on the basis of the new permits.”

The delays over the USFWS permits are part of a series of regulatory hurdles MVP has faced in its effort to construct a route for Marcellus and Utica shale gas to travel southeast out of West Virginia to an interconnect with the Transcontinental Gas Pipe Line in southwestern Virginia.

MVP received its FERC certificate in a split decision in October 2017, and since that time opposition groups working through the courts have succeeded in stalling construction progress, forcing the pipeline to seek a two-year extension of its original federal deadline to wrap up work on the project.

MVP, which is still awaiting a supplemental environmental impact statement from the U.S. Forest Service, recently told FERC it expects to have all remaining permits in hand by the end of this year.