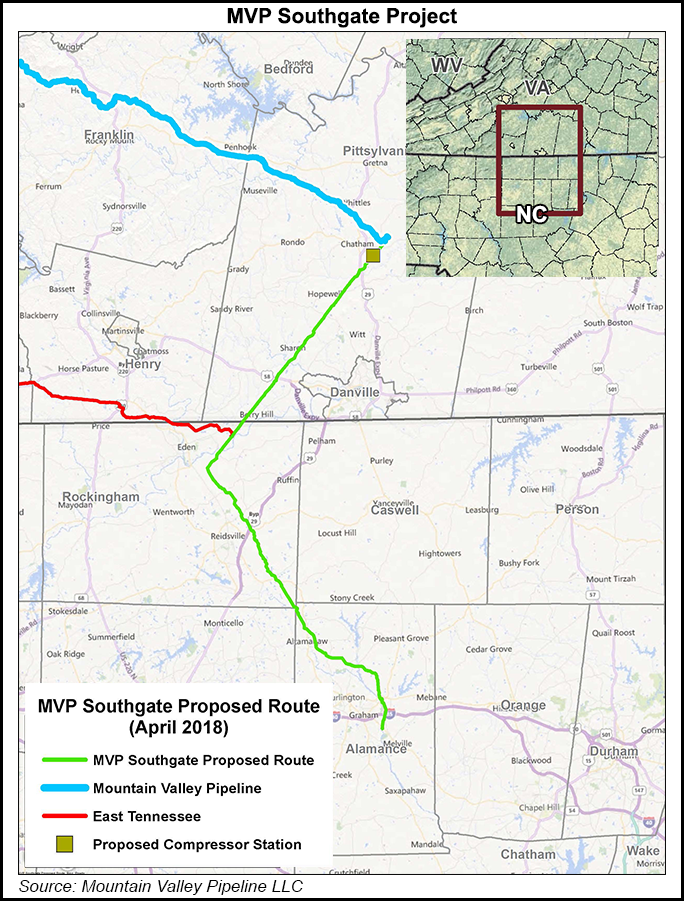 Going against DEQ’s recommendation, the Virginia Air Pollution Control Board voted 6-1 to deny a draft minor new source review permit for the proposed Lambert Compressor Station (LCS), a key link to extend MVP — via the separate MVP Southgate project — 75 miles from Pittsylvania County, VA, into the North Carolina counties of Rockingham and Alamance.

“We are disappointed that the majority of the board voted Friday to deny an air permit for the proposed MVP Southgate Lambert Compressor Station despite the overwhelming evidence that our application met or exceeded all previously stated requirements,” Shawn Day, MVP Southgate project spokesperson, told NGI. “The proposed facility would have been one of the most stringently controlled natural gas compressor stations in the United States.”

Day stressed that the MVP Southgate decision has no bearing on the MVP project, which will transport 2 million Dth/d of natural gas from West Virginia to a Transcontinental Gas Pipe Line interconnect in southwestern Virginia.

“MVP Southgate is a separate project, with its own regulatory processes, its own FERC docket number, its own customer,” he said. “Regardless of the Air Board’s decision, MVP will still deliver 2 million Dth/d to the Transco interconnect.”

To be sure, MVP has faced setbacks of its own. However, MVP developers have also secured victories this year with FERC, which granted approvals tied to the pipeline’s construction and water-crossing method.

MVP is a joint venture of Equitrans Midstream Partners LP, NextEra Capital Holdings Inc., Con Edison Transmission Inc., WGL Midstream and RGC Midstream LLC. Equitrans, which holds a 47.8% stake in the JV and will operate MVP, said in a recent investor presentation that the targeted full in-service date for the 300-mile pipeline is the summer of 2022.

Equitrans Midstream owns 47.2% of the MVP Southgate project and plans to operate that pipeline as well, according to the project website. NextEra, Con Edison, WGL, RGC, and PSNC Energy also own MVP Southgate interests.

The Air Board justified its decision to deny the LCS draft permit based on three reasons: the Pittsylvania County community where the compressor station would be located is “an environmental justice community;” Virginia Environmental Justice Act “fair treatment requirements” have not been met; and the site is not suitable based on act requirements and other factors.

Day said the board’s decision “is not supported by factual evidence and the rigorous examination presented by MVP Southgate, an independent consultant and DEQ staff which demonstrated that the project’s advanced design would have no adverse impacts on public health.”

Day also told NGI the Federal Energy Regulatory Commission “has already performed a comprehensive review of the project and determined it is needed to meet public demand, and that it could be built and operated safely.”

“The state board’s decision disregards FERC’s Final Environmental Impact Statement and Certificate of Public Convenience and Necessity for the MVP Southgate project and the Pittsylvania County Board of Supervisors’ unanimous support for the project, and it ignores unprecedented outreach and communications campaigns by DEQ staff and the MVP Southgate team,” said Day. “Mountain Valley is evaluating its next steps.”

“For many months, our movement has been demanding a stop to the Lambert Compressor Station in Pittsylvania County,” said Russell Chisholm, co-chair of the group Protect Our Water, Heritage, Rights. “Today, the Virginia Air Pollution Control Board opted to deny the Mountain Valley Pipeline’s air quality permit, which is necessary for the compressor station to be built.”

Elizabeth Jones, Environmental Justice Committee member with the Pittsylvania County National Association for the Advancement of Colored People, said the Air Board showed “courage” in denying the permit.

“Environmental and climate justice is a civil rights issue,” said Jones. “We all depend on the physical environment and its bounty…We have faith that we can protect our communities.”