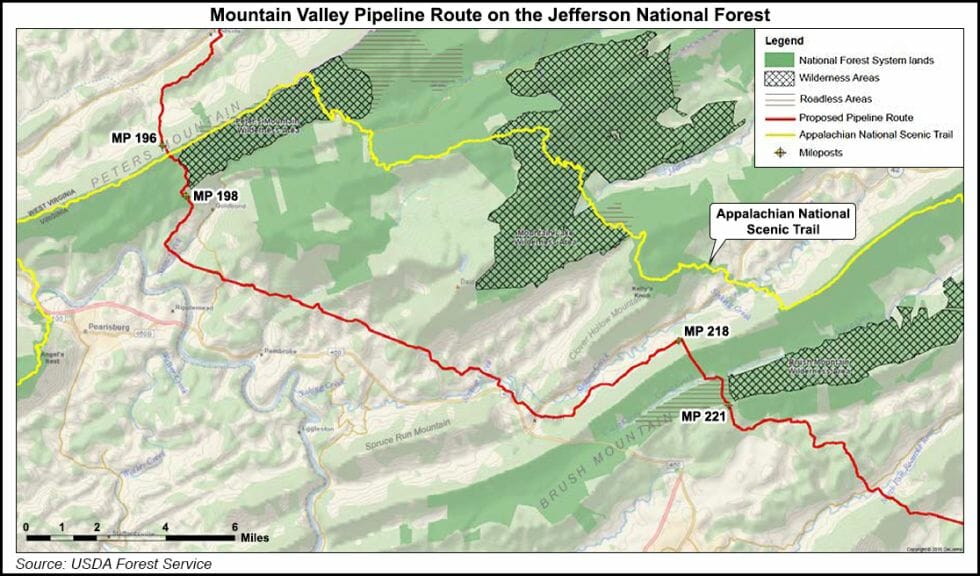 The order, part of the agenda for the Federal Energy Regulatory Commission’s monthly meeting Thursday, allows for some construction between mileposts 196.0 and 221.0 of the pipeline, where work had been on hold following a 2018 court ruling vacating federal authorization for MVP’s 3.5-mile crossing of national forest lands.

Earlier this year, MVP asked FERC to reduce the size of the exclusion zone and allow for additional construction activities to resume, providing supporting information indicating that portions of the route could be reopened without impacting the national forest.

Chairman James Danly and Commissioner Neil Chatterjee, who made up the majority in the 2-1 vote approving Thursday’s order, said they agreed with staff findings that “project construction activities in the area from milepost 201.6 to 218.6 would not contribute sediment to any portion of the Jefferson National Forest or contribute sediment or turbidity to any waterbody” that would then flow into the forest.

Danly and Chatterjee are both Republicans. Democrat Richard Glick dissented. Commissioner Allison Clements, sworn in earlier this month, did not participate in the decision.

Thursday’s decision follows the recent conclusion of a supplemental environmental review conducted by the U.S. Forest Service (USFS) amending its management plan to allow for construction through protected lands. That review was set in motion after the U.S. Court of Appeals for the Fourth Circuit in 2018 tossed federal approvals from the USFS and the Bureau of Land Management needed for MVP’s forest crossing.

Project opponents have argued that MVP should not be allowed to resume construction while authorization for the forest crossing remains pending.

Citing analysis on alternative routes conducted by BLM in 2018 and earlier this year, Danly and Chatterjee found that “the record gives us no reason to assume that there will be a change to the proposed route through the Jefferson National Forest, and authorizing the resumption of work outside of the Jefferson National Forest is permissible and does not improperly limit options available to BLM and Forest Service.”

For his part, Glick in the dissenting opinion voiced strong disagreement with the majority, calling their position “bewildering.” He went even further, suggesting that construction should not move forward anywhere along the route until MVP once again had all requisite permits in hand.

“Although unstated in today’s order, the Commission has previously taken the position that Environmental Condition 9” of MVP’s certificate of public convenience and necessity “is relevant only when a project developer first begins construction,” Glick wrote. “That interpretation is nonsensical and waters down an important environmental and landowner protection measure.”  If serving the public interest meant that MVP had to have all required permits before starting construction, the same standard should apply when the developer seeks to resume construction, he said.

“I see no reason why it is not equally important to require the pipeline to meet the same condition every time it recommences construction, especially after having a necessary permit invalidated by court order,” Glick wrote.

Since receiving its FERC certificate in 2017, also via a split decision, MVP has faced relentless opposition from environmental advocates. In response to legal challenges spearheaded by these opposition groups, the Fourth Circuit has issued numerous adverse rulings that have led to construction stoppages and delays.

MVP’s permits have a “checkered litigation record,” according to Glick, who referenced the court decisions in arguing that FERC should withhold construction authorization for now. The commissioner alluded to a common refrain from anti-pipeline groups that FERC serves as a “rubber stamp” for natural gas projects under its review.

“It is the Commission’s job to protect the public interest throughout construction of a new pipeline and we are not taking that responsibility seriously if we brush aside concerns about the invalidated permits and treat the absence of conclusive evidence that the pipeline route will change as a basis to assume that a project will go forward as planned, even while key permits remain outstanding,” Glick said.

“Once again, that approach is exactly what earns this Commission its unfortunate reputation as a rubber stamp.”