Murphy Oil Corp. is selling off $2 billion worth of stakes in Malaysia oil and gas stakes to increase capital spending in the Eagle Ford Shale, among other things. 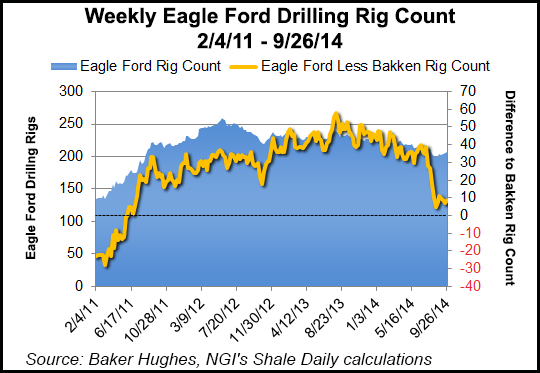 The El Dorado, AR-based independent said subsidiaries Murphy Sabah Oil Co. Ltd. and Murphy Sarawak Oil Co. Ltd. would sell around 30% of its Malaysian assets to state-owned PT Pertamina Malaysia Eksplorasi Produksi in an all-cash transaction. Murphy would remain operator of the overseas assets in both the deepwater and shallow-water properties.

“This transaction marks the value of the high-margin, long-term assets in our Malaysian business,” said CEO Roger W. Jenkins. “This transaction allows us to redeploy the proceeds through an individual or combination of strategic and financial initiatives such as increased drilling capital in the Eagle Ford Shale, acquisition opportunities, debt reduction and share repurchases.”

“Murphy’s decision to deploy more capital to the Eagle Ford may be running a little counter to current industry practice, at least from a drilling standpoint,” said Patrick Rau, NGI director of Strategy & Research. “The overall rig count in the Eagle Ford has been falling in recent months according to Baker Hughes data, dropping from a high of 259 on May 25, 2012 to 207 as of last Friday.

“The Eagle Ford overtook the Bakken Shale as the ”hot’ play in the industry in 2011, as measured by rig counts in the two plays, but things are now evening out,” Rau continued. “Operators were running 58 more rigs in the Eagle Ford than they were in the Bakken as recently as August 2, 2013, but that difference had been whittled down to just nine rigs as of last week.”

Murphy also produces from eight fields in the deepwater Gulf of Mexico and one in Alaska.