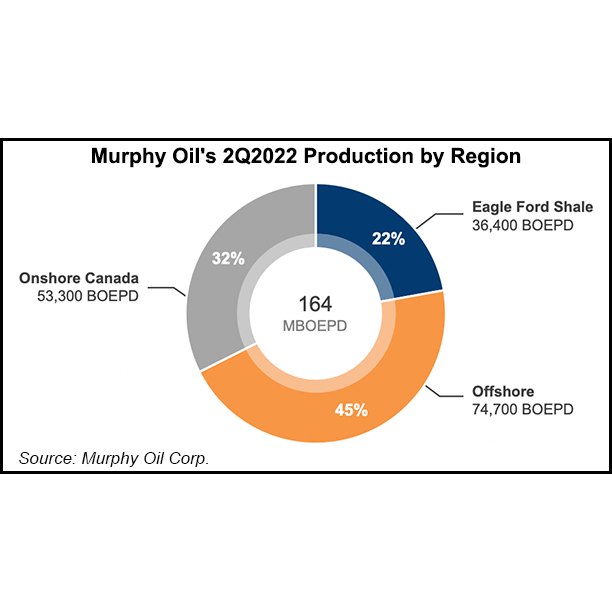 The producer “continues to successfully execute a significant and intricate project in the Gulf of Mexico, while our onshore team has enhanced production volumes and accelerated returns across our North American unconventional business through new completion designs and longer laterals,” CEO Roger Jenkins said during the second quarter earnings call.

“This outstanding execution has enabled us to capitalize on current high oil prices, as the additional production provides excess cash flow to support our delevering strategy, while increasing our dividend.”

Murphy, he said, is “now in a position to disclose a capital allocation framework that will highlight targeted returns to our shareholders through the dividend and share repurchases.”

The exploration and production (E&P) independent in the Eagle Ford in South Texas added 17 wells in Karnes County and six wells to its Catarina assets in Dimmit County.

The “strong production rates,” coupled with fetching an $85/bbl West Texas Intermediate oil price, could allow the producer to achieve “full investment recovery in three to five months for Karnes, and in six to 11 months for Catarina,” Hambly said.

In the Gulf of Mexico (GOM), Murphy achieved first oil ahead of schedule during the quarter from the King’s Quay floating production system.

Combined, the four wells are achieving a total gross production rate of about 70,000 boe/d, with 87% oil. By the end of the year, Murphy is expecting to approach the nameplate capacity for King’s Quay of 85,000 boe/d, Hambly told investors.

A fifth well, and the final well in the Khaleesi/Mormont field, is “anticipated to flow immediately,” he said.

“Following these transactions, we have a total working interest of 59.3% in Kodiak, and 16.1% in Lucius,” Hambly said. “What we like most about these purchases is that they have active opportunities to further increase their value.” The E&P and its partners recently drilled a successful well at Kodiak and are engaged in a two-well program at Lucius.