U.S. independent Murphy Oil Corp. is advancing plans to drill in waters on the Mexican side of the Gulf of Mexico (GOM) next year. 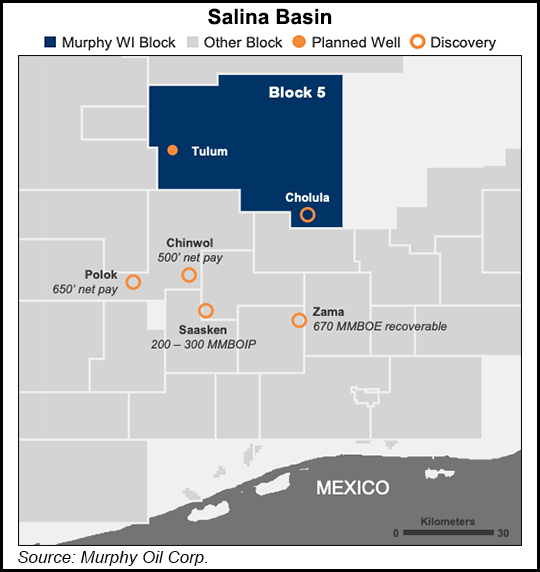 Management said earlier this month the company is progressing permitting and regulatory approvals to drill at the Tulum prospect in Block 5 of the Salina Basin. CEO RogerJenkins said during Murphy’s 2Q2021 earnings call that the company is optimistic on Block 5 following recent discoveries nearby.

“It has a series of subsalt opportunities that are larger, very nice and on a trend of success,” Jenkins said of the Tulum prospect, which was previously named Linares. Block 5, which Murphy operates with a 40% interest, is estimated to have a resource potential of 800 million-2 billion bbl of oil.

The company is pursuing an appraisal program for its Cholula discovery, which was announced in 2019. The discretionary three-year program has already been approved by Mexico’s main upstream oil and gas regulator and envisages up to three appraisal wells as well as geologic and engineering studies.

Murphy also reported progress in the U.S. GOM, where it holds interests in nearly 20 producing assets. Murphy drilled one well at its Samurai field in Green Canyon Block 476 during the quarter, and plans to drill one more in 3Q2021. It is currently drilling at the Khaleesi field in Block 390. Once drilling is done, completions on three Khaleesi wells are scheduled for 4Q2021 with first oil pegged for the first half of 2022.

Two wells at the nearby Mormont field in Block 478 are expected to be completed in 1Q2022 and come online in the first half of next year, while three wells at Samurai are expected to reach first oil in the second half of 2022.

The wells would be tied back to the King’s Quay floating production facility (FPS), which is designed to process 80,000 b/d of oil and 100 MMcf/d of natural gas. Fabrication on the FPS wrapped up during the quarter and the facility is now headed to the Texas coast. There, final work would be done prior to its placement in the GOM in early 2022, management said.

Murphy also plans to drill in the Austin Chalk formation in South Texas later this year, with an eye to derisking about 100 more locations in the play.

The company plans to drill four wells on its Eagle Ford Shale acreage in the fourth quarter, one of which is to target the Austin Chalk, Jenkins said during the earnings call.

“Additionally, other public operators near our Catarina acreage in the Western portion of our Eagle Ford Shale acreage have reported strong Austin Chalk results from their recent wells,” he said.

Executive Vice President of Operations Eric Hambly described the venture as Murphy “stepping our toe” into the play. “We think it has some nice potential to be sort of top-tier performing, but we’d like to go out and prove that it really looks very attractive on our acreage.

“If it is successful, then we think we have 100-plus Austin Chalk locations that would be top tier performers, which would really help us continue to execute and delever.”

During the most recent quarter, Murphy brought three operated wells online on its Caterina asset in the Eagle Ford with an average gross 30-day initial production rate of approximately 1,080 boe/d.

Elsewhere in the North American onshore, Murphy brought 10 wells online on its Tupper Montney Shale asset in Canada, with no plans to drill more this year.

Montney natural gas production averaged 248 MMcf/d during the quarter, compared with 237 MMcf/d in 2Q2020. Jenkins said output there could reach 500 MMcf/d over time.

“We have an activity plan to reach that level of production that we’ve disclosed in our capital plans, and it’s just like drilling in the Eagle Ford or anywhere else,” he said. “When it gets better, we’re not going to change those plans, because we can reach our planned level there without it.”

The higher production and improved commodity prices led to a $190 million increase in the cash position, the company said. Second quarter cash and equivalents amounted to $418 million.

The company is working to pay off its $2.8 billion in debt, and upped its debt-reduction target from $200 million to $300 million by the end of the year. Jenkins said stronger oil prices along with tighter spending and operational efficiencies drove the decision to increase the target.