More capital spending reductions are making the news in the energy sector, and the coronavirus is hitting closer to home, as Murphy Oil Corp.’s CEO announced he is taking a temporary medical leave on a presumptive diagnosis. 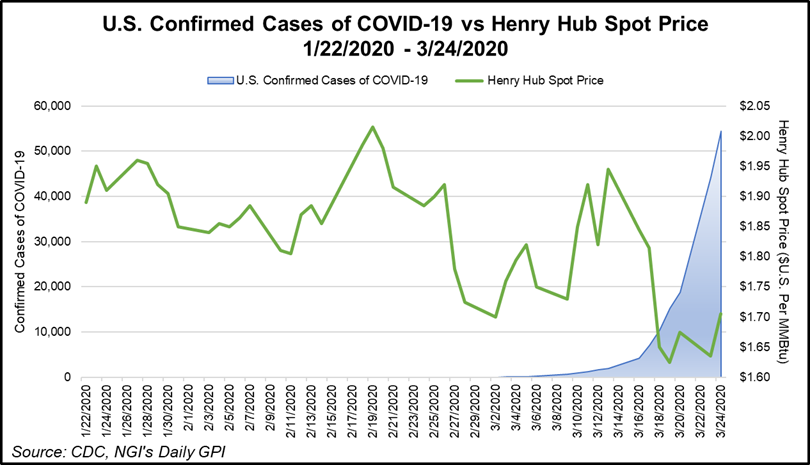 Murphy CEO Roger W. Jenkins has, pending test results, a presumptive diagnosis, the El Dorado, AR-based independent said. “He is expected to completely recover,” but in the interim, CFO David R. Looney has taken the helm as president and CEO.

Meanwhile, in response to the downturn in the energy markets, more exploration and production (E&P) companies and oilfield services (OFS) operators have reversed course on their 2020 capital expenditures (capex) and activity plans.

Appalachia-focused Montage Resources Corp., a natural gas heavy, revised full-year capex lower by 23% to $145-165 million, the midpoint of previous guidance. However, production targets remain at 570-590 MMcf/d, primarily because of outperformance in 1Q2020, as well as improved cycle times and the “gassier” well mix.

A “strategic shift in activity levels” has led to the E&P reducing projects in Ohio’s Marcellus Shale, where it has been capturing more liquids, and increases the Utica Shale dry gas-weighted activity.

“By strategically shifting operational activity and the production mix, we expect to continue to achieve an extremely high level of capital efficiency with the approximate 23% capital savings while maintaining our overall production, based on the respective guidance midpoints, and subsequently allowing the company to capture any potential benefits of the more constructive natural gas macro environment in the second half of 2020 and 2021,” CEO John Reinhart said.

“In addition, we are continuing to act opportunistically in the current commodity price environment and tactically add additional downside protection to our cash flows by actively managing our hedge book.”

Montage’s projected production profile for 2020 “remains significantly above the company’s firm transportation commitments and provides multiple options regarding development activity, while also allowing the company to continue to maximize its realized natural gas price from a balanced portfolio of sales points both in-basin and out-of-basin.”

Meanwhile, OFS giant Nabors Industries Ltd., which owns the world’s largest land-based drilling fleet, has reduced its 2020 capex to $275-295 million from $350-370 million. It also has recommended canceling the dividend.

“As a result, many E&P operators are implementing activity reductions in the U.S. Lower 48, in excess of the cuts they had previously announced for 2020,” he said. “Internationally, activity is expected to hold up better, although we could experience disruptions from the effect of government actions aimed at containing the virus…

“The announced reactions from operators have been swift and substantial, and the market conditions we face are sure to be difficult. We are acting quickly and decisively. We remain committed to improving the company’s capital structure this year even under the expected market conditions, and we are confident these announced measures will support that goal.”

Houston-based Noble Midstream Partners LP, whose operations are in the Permian Delaware and Denver-Julesburg basins, is reducing its quarterly distribution by 73% to 18.75 cents/unit to preserve around $200 million of annualized cash. The midstreamer, majority owned by Noble Energy Inc., already had announced a $75 million cut to capex for this year.

Another midstream partnership, Houston’s Genesis Energy LP, also has reduced its quarterly distribution. The reduction to 15 cents/unit is designed to also save around $200 million a year. Genesis provides pipeline transportation services in the Lower 48 and the Gulf of Mexico.

“While the operating environment is more uncertain than it was four to six weeks ago, we have yet to identify any insurmountable challenges and have absolutely no liquidity concerns,” CEO Grant Sims said. “The decision to reduce the common distribution is not driven by any material deterioration in the performance of our underlying businesses, but more an analytical and thoughtful reflection of the current environment.”

The upstream exposure for Genesis “is to long-cycle deepwater Gulf of Mexico production as opposed to onshore short-cycle shale production,” Sims said. “The ongoing development of the long-cycle, world class reservoirs in the deep water has proven resilient across multiple previous commodity cycles, and we have no indication it will not continue throughout this cycle regardless of its depth and duration.”