Three weeks after FERC staff determined that Dominion’s proposal to export liquefied natural gas (LNG) from a facility in Maryland posed no major threat to the environment, Sen. Lisa Murkowski (R-AK) urged regulators to grant the company an export license. 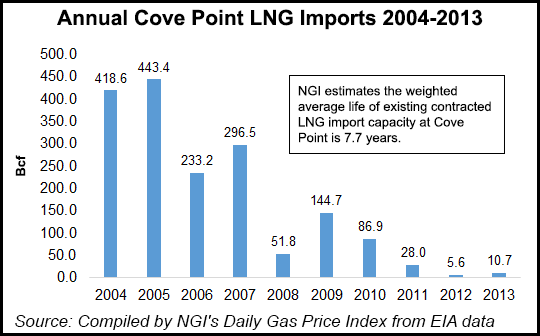 Meanwhile, Dominion said it has received regulatory approval from the Maryland Public Service Commission (PSC) for its proposal to export LNG from its facilities on Chesapeake Bay, in Calvert County, MD.

In a letter Wednesday to Cheryl LaFleur, acting chairman of the Federal Energy Regulatory Commission, Murkowski pointed out that the last remaining regulatory hurdles for the Cove Point Liquefaction Project [CP13-113] were approvals from FERC and the Department of Energy (DOE).

“As you know, I have strongly supported approving greater volumes of natural gas exports to send a powerful signal to the world that the United States is ready to lead on energy issues,” Murkowski said. “At a time of heightened risk in the international system, I firmly believe opening up our markets to friends and allies is in the public interest. A prompt decision would be in the national interest.”

Dominion Cove Point LNG LP (DCP) has proposed exporting 5.75 million metric tons per annum of LNG using marine carriers that would dock at an existing offshore pier. FERC issued an environmental assessment for the project last month and is currently in the middle of a 30-day public comment period on the plan. The comment period ends June 16 (see Daily GPI, May 15; March 3).

DOE issued a conditional license for LNG exports, to countries without a free trade agreement (FTA) with the United States, in September 2013 (see Daily GPI, Sept. 12, 2013). The conditional license gave Dominion Cove Point permission to export up to 0.77 Bcf/d for 20 years.

According to the DOE, as of April 18 the department has approved seven requests — filed by six companies — to export domestically produced LNG to non-FTA countries. Collectively, those DOE authorizations would allow the export of 9.27 Bcf/d. To date, only Cheniere Energy Inc.’s Sabine Pass project has received final approval from DOE and FERC to export LNG to non-FTA countries.

Dominion said it has received a Certificate of Public Convenience and Necessity (CPCN) from the PSC. The certificate was needed for two 65-megawatt steam turbine generators that will be used to produce electricity. According to the company, waste heat from two combustion turbines used to drive compressors to produce LNG will be recycled to produce steam to drive the steam turbines.

Dominion estimates construction of the export project will cost between $3.4 billion and $3.8 billion, and will generate an additional $40 million in annual tax revenue to Calvert County.

Adding liquefaction and export capabilities to Cove Point would certainly breathe new life into the facility. Annual LNG import volumes through Cove Point topped 400 Bcf per year a decade ago, but imports were just 5.6 Bcf in 2012 and 10.7 Bcf in 2013, according to data from the Energy Information Administration. NGI estimates that the remaining weighted average contract volume for import capacity at Cove Point stands at 7.7 years. 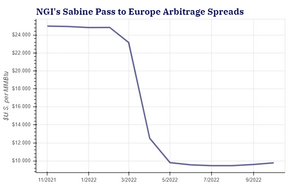 European natural gas prices jumped Monday after Russia booked little additional pipeline capacity to move more supplies to the continent next month. Gazprom PJSC booked no additional capacity for November through Ukraine during an auction Monday. The company took only about 35% of the available capacity via Belarus and Poland next month. The auction’s results…