The Wyoming Oil and Gas Conservation Commission (WOGCC) has decided to stop issuing verbal drilling permits, meaning oil/natural gas operators will no longer have an option of attaining expedited permits to drill. The new approach is for an interim period. 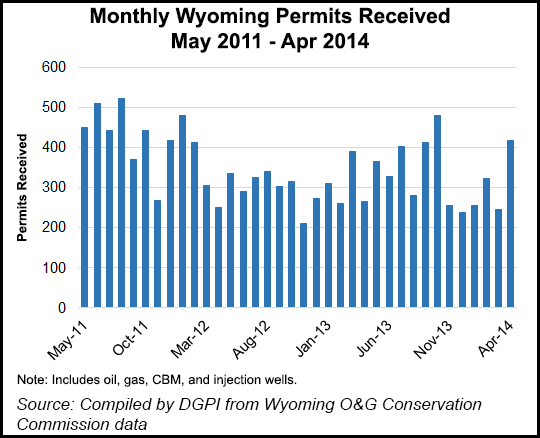 “Due to the volume of permits received by this agency, I am suspending the practice of ‘verbal approval to drill a well’ for 90 days or until Aug. 1, 2014 for [permit applications] that have been received and waiting on approval for 30 days or less in this office,” said Mark Watson, the WOGCC’s interim oil/gas supervisor.

Watson said the WOGCC will continue to work with industry and will consider an expedited permitting process for applications that have been waiting for approval for more than 30 days along with a written request with reasons included.

“I hope that industry will be patient and understanding, and I will reevaluate this issue in three months,” Watson said.

In the past, operators seeking an expedited permit could call the WOGCC and ask for an oral approval. The agency would then review the application and decide whether to grant the request.

Reportedly, the overall increase in regulations and the volume of permit applications brought about the need for the change.

A total of 416 oil, natural gas, coalbed methane and injection well permits were received last month, according to WOGCC data. That was up substantially from the previous four months and from the 266 reported in April 2013, but didn’t match the heights recorded in 2011, when more than 500 permits per month was not unusual.

Weak export demand and an uptick in production estimates saw natural gas futures reverse lower in early trading Wednesday. The August Nymex contract was off 4.6 cents to $1.830/MMBtu at around 8:45 a.m. ET. The sell-off in the August contract could be attributed to a small upward revision in the latest production data and another…