After a quiet start, Old Man Winter kicked in the door on the natural gas market and fueled massive gains for December baseload natural gas prices, according to NGI’s Bidweek Alert (BWA). 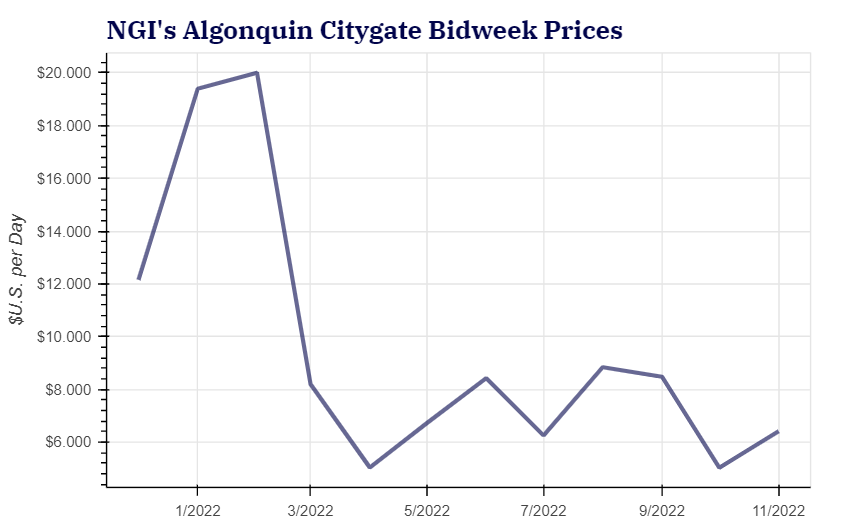 Basis prices in the Northeast, particularly New England, were seen in the mid-teens as record-setting overnight temperatures and an eye-popping lake-effect snowstorm hit the region this week. Though forecasts point to much milder weather around the Thanksgiving holiday, the cold blast served as a stark reminder of the toll frigid temperatures and constrained pipeline capacity can take on regional gas prices.

What’s more, there is some discrepancy in the weather data, which keeps in play the risk of cold returning in the next couple of weeks. NatGasWeather said frigid air remains on track to arrive over Northwest, Mountain West and Northern Plains from Tuesday through Dec. 7, but weather data were less aggressive advancing cold air eastward.

“There will still be brief bouts of stronger demand across the northern U.S. Dec. 1-7 and why national demand will be closer to seasonal,” NatGasWeather said. “But again, we must expect the weather models to struggle going forward as they try to resolve just how much frigid air over Canada and the western U.S. will advance into the eastern half of the U.S. Dec 1-7.”

At the Algonquin Citygate, basis prices for December baseload averaged $16.375, BWA data showed. For comparison, Algonquin stood only $1.210 above benchmark Henry Hub last month. Notably, Algonquin traded only as high as $6.690 over the three-day bidweek period.

Iroquois Zone 2 December basis averaged $11.520 on the first day of the December bidweek period, up from a modest 65-cent premium in November, BWA data showed.

Henry Hub did not trade on day one of the December bidweek period, but the prompt-month Nymex futures contract settled Tuesday at $6.779.

With no pipeline capacity to spare, and LNG imports a key component of supply in the winter, the price spikes in New England could foreshadow higher prices in the coming months in the event of prolonged cold. Market observers have noted the possibility of the region having to price itself high enough this winter in order to attract liquefied natural gas cargoes into the Everett or Northeast Gateway import terminals, rather than Europe or Asia.

The tight conditions have prompted calls from New England’s electric grid operator, regional utilities and others to President Biden to address the lack of access to natural gas this winter season.

Meanwhile, Europe for the first time in almost two months is set to see normal temperatures over the next couple of weeks. Adding to the bullish near-term outlook, weather models show colder-than-normal temperatures could blanket the continent by early December.

December bidweek trading got off to a wild start in the West as well, BWA data showed.

Prices in the Rockies ranged widely from around $7.00 at the Cheyenne Hub to nearly $14.00 at Northwest Sumas on day one of the December bidweek trading period. For November baseload gas, Sumas recorded the highest price in the region at $6.270.

Cold weather already has impacted pipelines in the region, while storage withdrawals have begun in earnest. On the bearish side, wind generation is poised to rise in the coming days and temperatures are expected to moderate.

That said, with the potential for cold to smack the West in the coming weeks, struggling storage inventories in the region could slide further.

The Energy Information Administration (EIA) was set to release its weekly inventory report at noon ET on Wednesday, with expectations for the season’s first withdrawal coming in stout. Estimates ranged from 65 Bcf to 111 Bcf on Tuesday, which compares with last year’s 14 Bcf withdrawal and the five-year average pull of 48 Bcf.

Pacific stocks as of Nov. 11 stood at only 241 Bcf, which is about 8% below year-earlier levels and roughly 17% below the five-year average, according to EIA.

Total working gas in storage as of Nov. 11 stood at 3,644 Bcf, on par with historical levels.