An MPLX LP subsidiary launched a binding open season on Wednesday for commitments on a natural gas liquids (NGL) pipeline that would serve growing volumes in the Appalachian Basin. 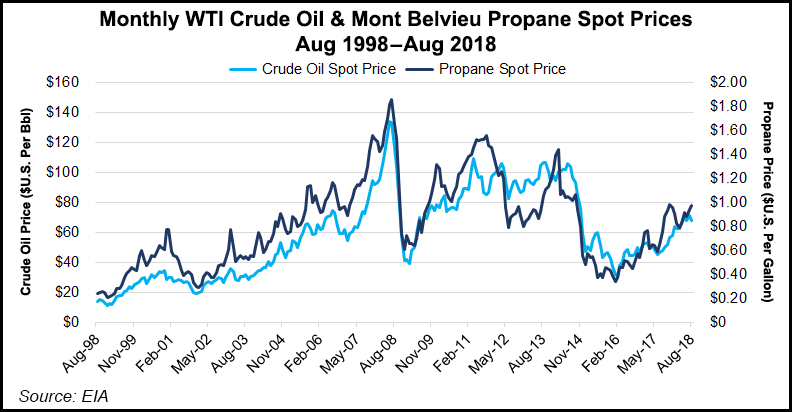 Stronger oil prices are again incentivizing NGL production in the region, and MPLX has discussed the shift throughout the year. The announcement is the latest in a slew of Northeast midstream projects in the works as rigs have moved back into wetter portions of the Marcellus and Utica shales.

“We are seeing some movement from dry to wet as prices continue to increase, and you’re seeing” propane and butane prices “continually move back up with crude,” said MPLX’s Michael Hennigan, president of the general partner, during a quarterly earnings call earlier this year. “I think you’re seeing a little bit of both. We’re bullish. That’s why we’ve had the plans we’ve had in place that we’re going to progress a pretty good organic growth program up in the Northeast.”

MarkWest Liberty NGL Pipeline LLC said the binding open season started on Wednesday and has scheduled it to conclude at 8 p.m. ET on Oct. 12. The pipeline would provide transportation services for a mixed stream of NGLs, including propane, butane, isobutane, pentanes and heavier hydrocarbons. It would move them from the company’s natural gas processing plants in West Virginia and Pennsylvania to fractionation facilities in Ohio and Pennsylvania.

An MPLX spokesperson said the company could not yet disclose potential plants that would be served or a potential route for the pipeline.

MPLX, the region’s largest processor and fractionator, produced a record 407,000 b/d of ethane and heavier NGLs in Appalachia during the second quarter. At the time, the company said it expected to add another 100,000 b/d of fractionation capacity by the end of the year at facilities in Ohio, West Virginia and Pennsylvania.

As liquids volumes grow, operational delays on Sunoco Pipeline LP’s Mariner East 1 and repeated delays over regulatory issues on construction of the ME 2 and 2X projects have forced the industry to find workarounds in the region. The Mariner East project has long been anticipated. It would be a major source of NGL transportation, with all three pipelines capable of moving 745,000 b/d to southeast Pennsylvania for international and domestic distribution.

Hennigan said during the second earnings call that the delays have not yet impacted MPLX, adding that they’ve primarily been handled by moving more product on railways. But that can be more costly. Ethane, for example, also has to move by pipeline because of its high vapor pressure. Hennigan said then that “at some point, if the delays were continue to occur, we would have to adjust.”

Shippers electing to make long-term volume commitments on the new NGL pipeline during the open season, MPLX said, would be eligible to receive firm service for their committed volumes.

For more information on the open season, or to receive a confidentiality agreement, contact Andrew Morrison, managing counsel for MPLX subsidiary MarkWest Energy Partners LP, at 303-925-9207 or at andrew.morrison@markwest.com.