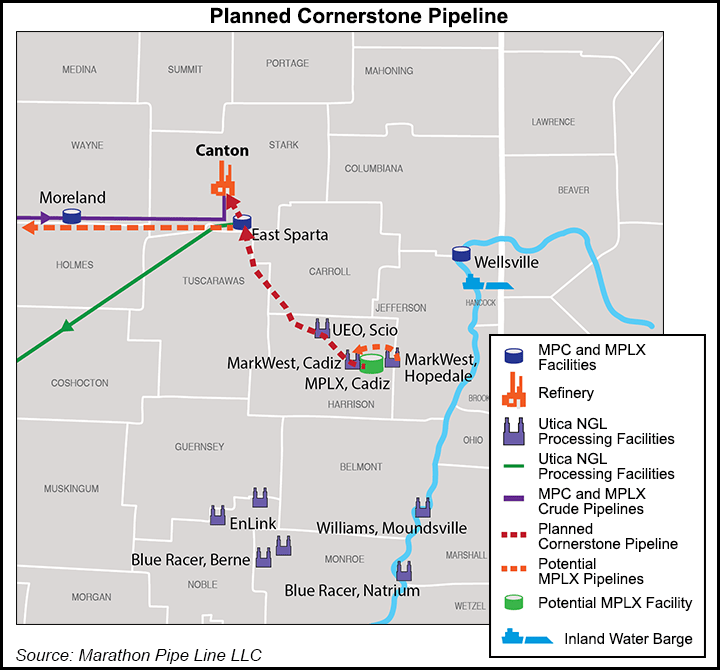 MPLX’s Executive Vice President of Corporate Planning and Strategy Pamela Beall told the audience at the Marcellus Shale Coalition’s sixth annual Shale Insight conference in Pittsburgh last week that a number of projects are either advancing or under evaluation to link production with more markets. The companies announced the merger in July 2015 and completed it in December (see Shale Daily, Dec. 1, 2015; July 13, 2015).

MPLX, which was formed in 2012 with legacy assets that were primarily geared toward crude oil, refined products, transportation and storage, has plans to leverage the robust position of its new subsidiary MarkWest Energy with plans in the works to move more NGLs to the East Coast and Gulf Coast.

The 50-mile, $250 million Cornerstone Pipeline system, which would originate in Harrison County, OH, and move 180 million b/d of condensate and natural gasoline to MPC’s Canton, OH, refinery and a tank farm in East Sparta, OH, remains on track to be completed in the fourth quarter, Beall said. In Harrison County, the pipeline would be connected to MarkWest’s condensate stabilization facility in Cadiz Township and the company’s Hopedale Fractionation Facility.

“What this is going to allow us to do is move condensate, natural gasoline and butane, not only to Marathon’s Canton refinery, but refineries in Northwest Ohio, Michigan, Illinois and ultimately we’ll be able to deliver condensate and natural gasoline into the Chicago market that can make its way to the Canadian market for New England.

“On the East Coast, our desire is to ultimately combine some of our refined products and batch those on the same pipeline,” Beall said.

The company could also utilize railroads to get more products to the East Coast, where it envisions a large-scale propane export terminal. The 795-mile Texas to Illinois Centennial Pipeline, which Marathon jointly owns with Enterprise Products Partners LP could also be repurposed to move NGLs to the Gulf Coast. The pipeline has a capacity of 210,000 b/d.

Beall said a major growth opportunity for the company is taking Appalachian NGLs and moving them into the motor fuels transportation markets. Earlier this year, a MarkWest executive told an audience at another industry conference in Pittsburgh that the companies were in discussions with producers about building an alkylate facility somewhere in Ohio or Pennsylvania (see Shale Daily, Jan. 27).

Beall said that “long-term, significant capital project” is “currently under evaluation.” The facility would upgrade butane produced in the Marcellus and Utica shales into alkylate, which is used as a blending component for cleaner-burning gasoline. If built, it would be the first of its kind in the basin.

Alkylate is expected to become essential in gasoline blending as refineries nationwide are facing stricter federal and state emissions standards. The United States still imports hundreds of thousands of barrels of blending components each day.