MPLX LP has completed a series of expansion projects to pair more Utica Shale liquids with refineries in the Midwest. 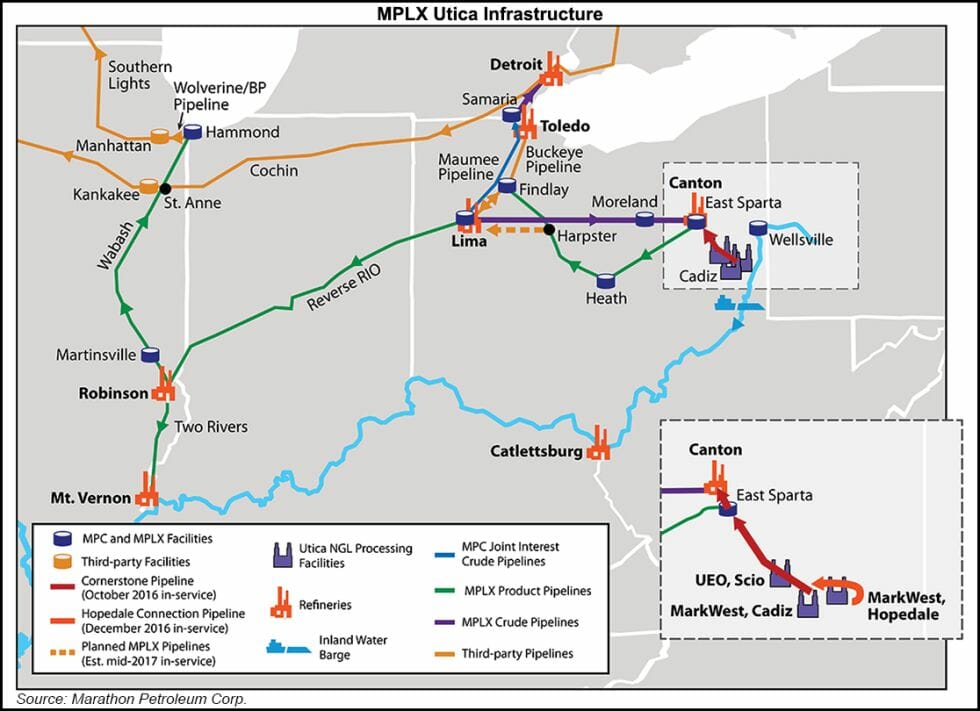 The company’s 49-mile Harpster to Lima Pipeline became fully operational this month to move condensate and natural gasoline in a batched system from Harpster, OH, to a tank farm in Lima, OH, in the northwestern part of the state. From Lima, those volumes can move to refineries in the state along with others in Michigan, Indiana and Illinois.

Since MPLX, the master limited partnership of refiner Marathon Petroleum Corp. (MPC) merged with natural gas processor MarkWest Energy Partners LP in 2015, the company has focused on creating more demand for Appalachian natural gas liquids inside the basin and across the country. It has been evaluating and working to complete a number of connectivity projects over the last year or so.

As part of the Utica build-out, MPLX also recently expanded two other systems, the East Sparta to Heath and Heath to Harpster pipelines to deliver into the new pipeline at Harpster. All three pipelines, operated by MPLX subsidiary Marathon Pipe Line LLC, now have a capacity of 50,000 b/d.

Condensate moves onto the expanded pipelines from stabilizers at MarkWest’s Cadiz complex and Utica East Ohio MIdstream’s Harrison Hub plant, both in Harrison County, OH. Natural gasoline can take the same path, but it originates from MarkWest’s Hopedale Fractionation Facility.

Last year, MPLX brought online one of the play’s first batched systems when it started up the Cornerstone Pipeline, which is designed to move condensate from Utica processing facilities in Harrison County to MPC’s refinery in Canton, OH.

The 180,000 b/d system, also designed to carry natural gasoline, transports volumes from Harrison County to East Sparta, OH, and then on to the refinery. MPLX subsidiary MarkWest also has processing and fractionation expansion projects in the works that are expected to come online in Pennsylvania and West Virginia later this year.