MPLX LP plans to expand its operations in the Southwest to match growing activity in the Permian Basin and along the Gulf Coast as 2019 gets into high gear. 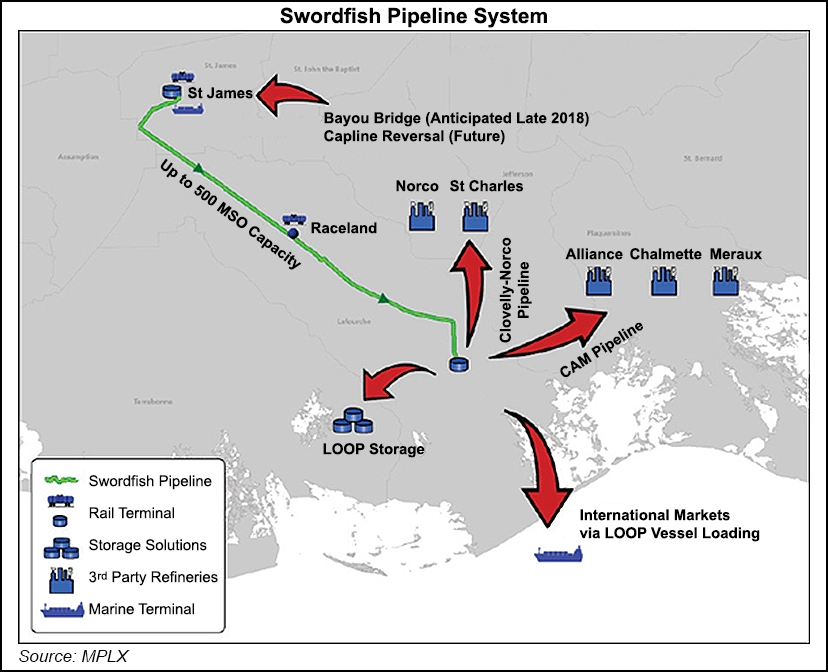 The midstream master limited partnership of refiner Marathon Petroleum Corp. has built a dominant position in the Northeast, primarily through its acquisition of MarkWest Energy Partners LP in 2015. Now it wants to mimic that growth in Oklahoma, in the Permian Basin’s Delaware sub-basin in Texas, elsewhere in that state and in Louisiana.

“In the Delaware Basin, we are focused on developing a super system, very similar to what we have in the Northeast,” said President Michael Hennigan, during a recent conference call to discuss quarterly results. “…We are also intently focused on building out our export capabilities. We’ve identified five locations along the Texas and Louisiana Gulf Coast that are expected to provide increased opportunities to connect growing domestic supply to global demand centers.”

MPLX plans to invest $2.2 billion this year and $2 billion next year on organic growth projects. Some of the keys to that plan include Permian long-haul crude oil, natural gas and natural gas liquids pipelines, and export facilities that would enhance the value of its logistics and storage segment. The company also expects to add 800 MMcf/d of gas processing capacity and 100,000 b/d of fractionation capacity this year to its gathering and processing segment in both the Northeast and Southwest.

One expansion plan is the 40-inch diameter oil pipeline, the Capline reversal, expected to enter service next year. The pipeline would move crude from Pakota, IL, to St. James, LA. The system would connect to Plains All American LP’s Diamond Pipeline, which originates in Cushing, OK, with a connection point to Capline in Tennessee.

Hennigan said once barrels make it to St. James, they would flow onto the 600,000 b/d Swordfish Pipeline now in the works. Swordfish would move oil from St. James to a storage hub in Clovelly, LA, providing shippers with more access to services, including vessel loading through the existing Louisiana Offshore Oil Port, or LOOP.

The plans come after another record year for the company in which management said it came away confident in the stable operations of its customers even as activity is poised to slow in both oil and gas basins on a variety of factors including commodity prices and demand.

The gathering and processing segment was lifted primarily by operations in the Marcellus and Utica shales, but gathered volumes increased by 11% year/year in the Southwest. Processed volumes were also up by 8% over the same period.

For the the year, the company generated $2.8 billion in net cash from operating activity and distributable cash flow of $2.8 billion, returning $2.1 billion to unitholders.