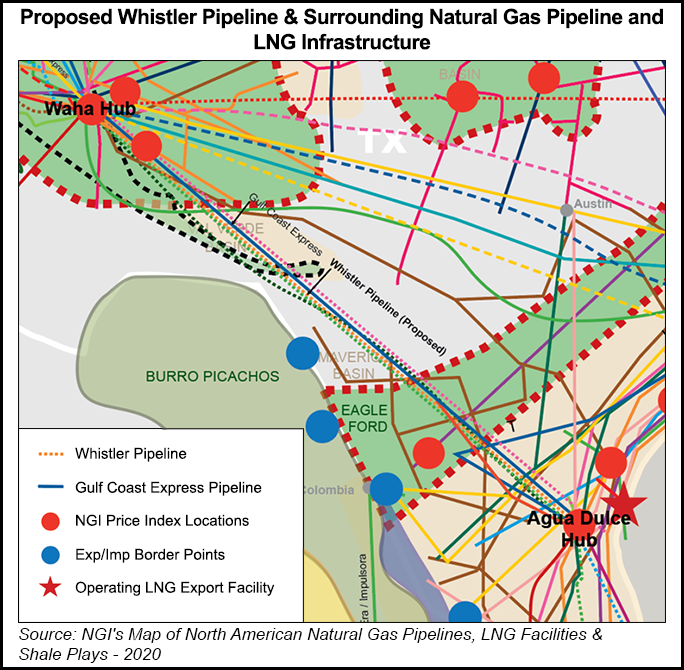 On the second quarter earnings call held Monday, CEO Michael Hennigan said the lower capital spend related to the financing was already factored into the reduced 2020 growth capital target, and it remains on track to reduce projected 2020 capital spending by more than $700 million and operating expenses by about $200 million.

Whistler is expected to be completed in the second half of 2021, with more than 90% of the 2 Bcf/d capacity contracted with minimum volumes committed (MVC), the CEO said.

Construction of the pipeline laterals from the MPLX and WTG processing plants and other initial construction are expected to be complete by the end of 2021, according to CFO Pam Beall.

Under the agreement, the JV initially would own a 30% undivided joint interest in the 24-inch diameter portion of the Epic NGL pipeline with the ability to grow ownership over time as the Permian Basin recovers. MPLX and the partners “did a really good job of staying focused on providing the customer service that was needed for the producers, and being very innovative and creative in the way that the project has evolved,” Beall said.

Management took time during the call to address the recent legal troubles of the Tesoro High Plains crude oil pipeline, which was ordered shut last month after 67 years in operation. Parent company Marathon Petroleum Corp. (MPC) operates the line and flows 74,000 b/d to its Mandan refinery in North Dakota.

“We did file an appeal, which triggers an automatic stay, so the current situation stays exactly the way it is,” Hennigan said. The company chief said if the section of the pipeline being contested were to shut down, it still would maintain about 75% of the gross earnings on the system.

“The downside is pretty low,” Hennigan said. “At the same time, we’re confident that we can get a resolution that works for ourselves as well as the counterparties.”

Meanwhile, the Wink-to-Webster 1 million b/d crude line from the Permian to Houston Ship Channel is on track for an early 2021 startup, management said. MPLX has a 15% interest in the project, as its market includes the MPC Galveston refinery.

There were some systems that ran below commitment during the second quarter, according to Beall, although the majority of MLPX’s pipelines “did not hit the MVCs.” The company expects volumes to pick up in the third quarter, “reflecting a rebound in the demand from the trough that we all experienced” in April.

“We were still close to 90% utilization in the Marcellus and not as much curtailment there, probably more in the West in the crude producing areas and associated gas,” said the CFO. “But as crude prices improved, we have seen some of those wells come back online and the gas along with it. Generally, the dip was in April into May, and it’s gradually improved since.”

Like other midstreamers, fractionated volumes were higher in the quarter, with MPLX reporting a 5% year/year increase to 543,000 b/d due to the expansion completed in 4Q2019 at the Sherwood Complex in Doddridge County, WV.