Plans to develop a liquefied natural gas (LNG) export facility on Mexico’s west coast are moving steadily forward as the project is garnering more interest from potential offtakers in Asia. 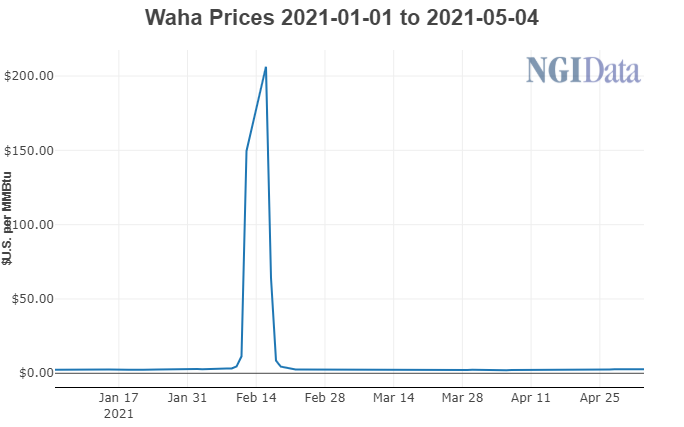 Mexico Pacific Ltd. LLC, the Houston-based company developing the project, signed a fifth memorandum of understanding (MOU) with a potential buyer in December, CEO Doug Shanda told NGI. Beyond that, the company is in talks with interested customers who have opted to skip the MOU process and move straight into sales-and-purchase negotiations, he added.

“We’re in a great situation competitively, and the buyers that we’re talking to all know that they’re in a competitive situation now,” he said. “So we’ve seen a bit more urgency at the beginning of this year.”

Customers are looking ahead at forecasts that predict a global LNG supply crunch in the middle of this decade amid rapidly growing demand, especially in Asia. Shanda likens it to buying a new battery when your car dies.

“If you go out today and the battery’s dead in your car, you’re not going to wait six months for the battery that’s on sale to be available at that car parts store. You’re going to go buy one today at whatever price,” he said.

MPL is targeting buyers in China, South Korea and Japan, though he expects emerging and expanding markets throughout Southeast Asia will also drive demand. Some potential buyers are also looking for volumes to feed into other nations besides their own, he said.

“When you look at the forecast in Asia, a lot of the demand will come from China, but there’s quite a bit of growth in the other Southeast Asian countries like Vietnam, for example. And so we think that’s a big growth market for us.”

MPL is looking to source natural gas from the Permian Basin of Texas and New Mexico, and is authorized by the U.S Department of Energy (DOE) to re-export up to 12 mmty of natural gas sourced from the United States and transported through Mexico via pipeline. That allows the company to price volumes on the Waha index, something Shanda said has drawn the interest of customers.

Some Asian LNG buyers have acreage in the United States and are already familiar with the index, he noted. They also view the pricing forecast as favorable compared to Henry Hub and believe it offers diversity to manage risk in their portfolios.

The West Coast location is also a benefit, and would allow customers to bypass the Panama Canal, cutting transportation time and cost. Shanda said customers are becoming more concerned about congestion in the Panama Canal as well as the Calcasieu Ship Channel in Louisiana.

With the signing of the fifth MOU the company now has 10 million metric tons/year (mmty) under discussion, above the 8.6 mmty it needs to sanction the first two trains at the project. That does not include the three or four other buyers with which MPL is discussing SPA agreements, Shanda said. Though MPL is still waiting on an export permit from the Mexican government and expects it will be issued by the middle of the year, it is aiming to finalize offtake contracts in the coming months and take a final investment decision (FID) on the first two trains by the end of this year or the beginning of next year.

FID on a third 4.3 mmty train could follow in short order after the first two phases are sanctioned, Shanda said.

“We’re oversubscribed if we just want to take FID on two phases,” he said.  “Hopefully, that third phase of 4.3 mtpa will fill up quickly.”

And there is room for further expansion. The three-train project would take up about 300 acres of the 1,100 acre site in Puerto Libertad, Sonora. Shanda said MPL has already made preliminary plans to double the size of the project. He said the site’s growth potential is the aspect of the project that excites him the most.

“We’ve got the gas supply, we’ve got the market, and we have this huge, beautiful site that we can continue to expand and make this basically a West Coast Mexico LNG hub,” he said. “That’s exciting for me.”

Shanda’s optimism doesn’t stop at the MPL project. He predicts more projects will reach FID this year after lagging behind last year amid the Covid-19 pandemic.

“If you look at the forecast, the shortfall starts to open up now,” he said. “These customers are looking, they don’t have the indigenous supplier looking to augment, and they rely on LNG that they’ve got to fill that supply for the demand at home. So they’re gonna have to get the gas from somewhere.”